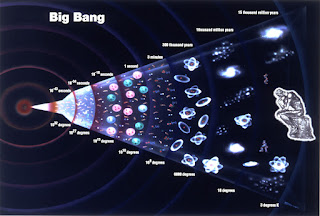 mahAperiyava simplified great concepts in his discourses. An example is this video of kAmu paati.

The way he simplified complex subjects, connecting them to science, was unparalleled. What kamu paati said here as mahAperiyavA explaining the telugu scholar is the jist of thousands of years of knowledge. Not sure how many realized it.

Amongst the green leaves is sitting a green parrot and below is statue of Lord rAmA in green. If we see the tree with respect to parrot and Lord rAmA statue, THEN ONLY we realize that branches, leaves, fruits combine and form one tree, while parrot and lord rAmA statue are not part of the tree. So branches, leaves that are part of the tree is the svagata bhedam (different entities but evolving together as one entity), while tree, parrot, rama statue etc are vijatiya bhedam (different and independently evolving entities.)

The ultimate kAraNa or reason is one only. The Universe might have come from one source. But multiple kAryams or action over a period has built multiple layers and layers of mAyA. From totally outside as we dig deeper through multiple layers, we get multiple understandings. We realize something is similar or same (all are green), then we realize they are not (they are independent), but then we realize some seemingly independent entities are actually evolving as one entity.  As layers of mAyA peels, our understanding keeps changing.

This is like the inverted banyan tree in Bhagavad Gita that Krishna talks about to Arjuna.  The roots are up north that we cannot perceive. The leaves are the knowledge through which we perceive this world/Universe. As we cut through all this mAyA, we realize the various bhedas and ultimately realize that the root is one.