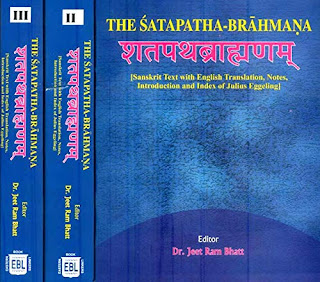 The vedic scriptures are seen through classification of saMhita, brAhmaNa, Aranyaka and UpaniSat. There are various ideas about what and how these classifications are meant for. Here is my understanding of it, which could be different from convention.

saMhita simply means collections. Collections of mantras are saMhita. The mantras describe various (cosmic in my view) events and happenings. My understanding is saMhitas were for brahmacAris to memorize the events/happenings as they were.

brAhmaNas are applications of saMhitas provided for gRhastAs. They describe various yajna rituals with stress on in which part which samhita mantra need to be recited. They are seen as application of saMhitas in day-to-day life by gRhastas. In fact grahastas lead a ritualistic life mostly. But in this process key mantras were continuously memorized and recited.

Aranyakas are reflections on saMhitas meant for the vanaprasthins. These are semi-philosophical, semi-ritual, which vanaprasthins (people who left gRhastAsrama and went to forests) took up and reflected further to find more esoteric truths out of vedic saMhitas.

Upa-niSat are theorems that emerge out of the Aranyakas meant for the saMnyAsins. These were philosophical which saMnyasin (who wander alone from place to place with detachment) took up with more reflections to produce socially useful/applicable philosophies for life and living beings.

The idea of this organization is that, at every stage of life, the vedic saMhitas or mantra collections along with their investigations/analysis are memorized, stored, investigated, truths found, debated, analyzed and passed on to next generations.

The brahmacAris and gRhastAs who were reciting and repeating the vedic saMhita and brAhmanAs were trying to decipher these texts in course of their recitation. They personified the various forces, energies and matter forms. These became divinities which had specific characteristics.  Their interactions became social events. Thus the puranic stories were born.

Now these puranas were able to be carried more easily across generations, as it is easy to be transferred, as people understood them easily and less focus on error-free transmission. Puranas eventually became a separate body of literature.

While several vedic texts have been lost in the process of manual transmission, Puranas help to bridge the gaps in some of the places, as we can infer the essence.

This study of vedic saMhita by brahmacAris and gRhastas lead to the pUrva mImAmsa school of thought.

mImAmsa is translated as 'profound thought' or 'reflection' or 'examination'. It is the 'reflection' or investigation of Vedic scriptures that resulted in development of Vedic worship rituals such as 'Yajna'.

From the vanprasthins and saMnyAsins who were investigating the AranyakAs and UpaniSads came several social, scientific and spiritual theories.

The saMkhya model, which I see as a design pattern for evolution, the carvAka system that relied on materialistic evolution, the vijnAna based on inferences and investigations, the vedAnta which was totally philosophical/spiritual came out of the study of AranyakAs and UpaniSads.