How did Consciousness arise..? 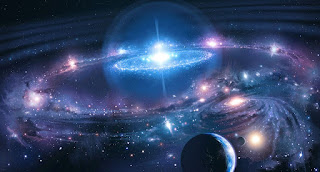 I believe in this Universe, there is a 'design pattern' followed for matter evolution and biological evolution. In the last post, I had talked about whatever we call as 'energy' (whatever that is seen). This post is about 'consciousness' (the 'seer') .

A scalar field is a distribution of a particular scalar quantity. At the beginning there are two 'scalar' fields one in which whatever we call 'consciousness' is distributed and another which interacts with this consciousness and condenses/freezes it from acting. I call the energy field as 'Atmanas' and the condensing field as  'manas'.

So there are no 'additional' fields that we need to search for, more than what's in the standard model (with the extension of these two fields)

An analogy is large mass of ocean of frozen ice (water is like consciousness but frozen due to a field that impedes the water's movement). This is the 'hima', 'himavat', 'himavan', 'hi' in our vedic scriptures.

Now we have a region where the Atmanas/consciousness is free (from the condensing manas) and whatever we call 'consciousness' that quantity is expressed in these matter combinations.

Also, this is the reason why a biological being is said to be equal to the Universe itself. (brahmanda is equal to pindanda).

But when this freeing up of consciousness occurs, it occurs in four dimensions, while the 5th dimension is 'shortened'.

Again the analogy is, in the 3 dimensional ocean of ice, when islands of water appear, any water movement is in just 2 dimensions (not in 3rd dimension, as there are no 'waves').

Again the analogy is, the perturbations in ice at first creates a small crack filled with water, followed by a much larger breakdown in which this crack expands and a larger water body is formed in the ocean of ice.

Pretty much this is happening in all the biological beings (or multiple cracks filled with water/consciousness). Depending on the chemical combination of matter forms in which the initial consciousness is freed up or expressed, their evolution  takes them in different paths.

The scalar quantity that we call as 'consciousness' is the 'Shiva', the Atmanas. The condenser is the Vishnu. By freeing up the condensation, Vishnu creates the 'manas' of beings. The substrates on which this freeing up of consciousness occurs due to accumulated perturbations is the Hiranyagarbha, the golden womb or the biological bodies. Specifically those chemical combinations of matter forms in which the condensation is freed up and consciousness is expressed. Shiva (Atmanas) and Vishnu (manas) are puruSa, the observers or sAksis, whom we can only infer through the effects.

If we believe puruSa sukta, then this original 'crack' that happened was just ten angulas and that's what expanded into all biological beings as we see it now with RNA world, prokaryotes, eukaryotes, plants, animals and homo sapiens (till now).  The oceans referred to in our scriptures are oceans of consciousness and land is the 'manas' that comes due to freeing up of condensation.

Shiva being the 'Cit- ambara' the 'consciousness sky' (roughly put), shiva realized internally through meditations (as shiva is the underlying consciousness) etc arise from these. Vishnu descending into biological beings with 'manas' also arises from this.  Vishnu being called mahA-manah (in vishnu sahasranama) comes from this.