Is Shankara the first Hindu fundamentalist..? 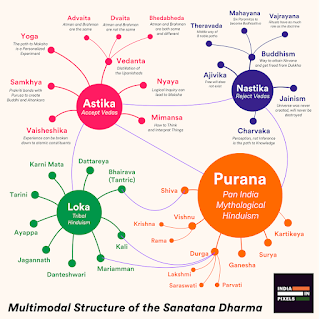 This post is with respect to the article (1) in National Herald India about the various doctrines that existed before advaita vedanta. My aim here is to offer an alternative understanding of advaita, saMkya, vaiSesika, cArvAka etc, that shows how they are all connected as compared to a notion that they are disconnected philosophical frameworks.

If we executive summarize the content of vedas and upanishads, the entire Universe came out of puruSa-Stri (where stri was a part of puruSa) (2). The  'Stri' (also called prakRti) evolved and became the Universe we see, while puruSa just remained an observer/witness/sAksi to this evolution of prakRti. puruSa never interacts with prakRti. We perceive this existence of puruSa only through the evolution of prakRti. What existed before this puruSa-Stri split (at the start of all) could be called 'Atman' (3) which we may not be able to fully fathom ever (4).

Whether it is upanishads (chandogya, brhadharanyaka, katha, kena) or gita (bhagavad, ashtavakra) or saMkhya (5), all of them state the same position or allude to it. Advaita or dvaita or visishta-advaita vedanta also base their understanding on the same position.

The common understanding of all vedic scriptures is that there is a sAksi (observer or witness) that cannot be perceived except through the acts of prakRti/stri/shakti. That sAksi does not interact directly with prakRti and is only a sAksi.

In comparison, buddhism and jainism discounted this sAksi or witness and said there is only shUnya behind. shUnya means emptiness or void or nothingness.

How does a shUnya and non-interacting, non-observable sAksi differ..? We can understand this from an analogy of modern science.

We often talk something called 'Energy' or 'Consciousness' in modern science. What is it..? How to define them..?

In quantum science, Energy is defined as Energy-Momentum (6) couple. Energy is defined in terms of the 'momentum', which is the impact that is observed. Energy can't be separately defined from Momentum and vice-versa. We perceive or talk about energy because there is momentum. It is analogous to ardha-nareeswara or shiva-shakti couple.

In classical science, Energy is perceived through mass (mass is energy condensed by Higgs field) or heat (vibrations of energy or kinetic energy) or  bonding between matter forms (potential energy) or internal energy (sum of potential and kinetic energy) or light (electromagnetic radiation) or work (expansion or motion through space) etc etc.  Again we perceive or talk about energy because of its effects in these various forms.

We can also say from 'nothing' or 'shUnya' all these effects arise.

But defining it as 'energy' gives us a way to measure the cumulative sum of the impacts of energy, 'locate' it specifically,  which in turns helps to design our machines. Same-way defining it as consciousness, helps us to improve our understanding of birth and death by 'locating' where all it plays.

Defining the one that is behind as a witness/sAksi (and not shUnya) gives us a way to measure the cumulative sum of the impacts of that sAksi and 'locate' it specifically somewhere.

If we apply this jist of our understanding (or this model)  to our daily social life,  we can say, as there is a sAksi or witness behind all that is evolving, our knowledge (buddhi) evolution has to have a sAksi (buddhi-atman) behind. Such a sAksi is the ultimate guru (7).

As that sAksi is detached witness from all happenings of the Universe and hence guides that Universe evolution,  if we inculcate a 'detached self' in us, then that 'detached self' helps guide our buddhi evolution by analyzing multiple perspectives without attachment to some particular perspective. Such a detached self itself is a manifestation or form of that Atman.

This 'detached self' or 'observer'  is found across in Rg veda (8), upanishads and is the platform on which advaita vedanta has been built.

In modern parlance one can call it manas-sAksi or conscience. We all do recognize a 'conscience' or 'manas-sAksi', right..?

The key point is that such a 'self' (or conscience) has to be detached, witnessing and hence treat our thoughts (perspectives) and other's thoughts (perspectives) equally and analyze like a third party. Such a detached witnessing self treats the 'body' in which the attached self is located as same as other bodies and is able to guide evolution of buddhi much better. Hence such a detached self is the 'Guru' (the heaviest one).  Any external person who can guide us like our detached self could be our 'Guru' (9).

Atman is what exists at the start, before everything (aitareya upanishad). 'At' means beginning at the far extreme etc. The 'self' (ma, man) that existed at the beginning is Atman. When it decided to expand it becomes 'brahman'. 'brahman' literally means expansion.  Brahman is the expanding self.

Where is this brahman, the expanding self..? it is inside us (and inside all) as the 'sAksi' the witnessing self. We have to realize this in our conscience.

Shankara never discounts puruSa or the sAksi but simply calls it the brahman, the expanding self as compared to Atman, the self that existed at the origins. This brahman manifests inside us as the witnessing self is the basis of his advaita vedanta.   Advaita vedanta is all about the realizing this brahman (10).

The article errs in not understanding this concept of puruSa as the detached self and same as brahman.

From philosophy to socio-religious framework

Realizing a detached, witnessing self inside us based on the understanding that such a detached self can only truly guide our evolution is like building a socio-religious framework based on science.

Shankara gives this socio-religious framework in sAdhana panchakam where he defines 5 steps through which one can lead that realization.

The first step is learning and development of knowledge by performing duties excellently. Second step is devotion/bhakti to external divinity. Third step is introspection/investigation into vedic scriptures in more detail and giving up that 'I' pride (which becomes possible in this step, because you develop devotion or bhakti to an external divinity).  Fourth step is to live frugally, independently (or least dependently), speaking measuredly etc that develops a fully detached, witnessing self in us.  Fifth step is to be fully like that atma, being totally detached and witnessing (11).

By defining bhakti as a way to jnAna (realization of witnessing self or brahman) in five steps, Shankara made it possible for everyone to realize that jnAna, without living the life of an ascetic or giving up everything.

Anyone can achieve this realization. The five steps are not 'Asrama' or stages of life. A scientist or doctor or researcher or laborer or soldier or farmer or software engineer or anyone focused on daily life can develop such a realization in them and live life with a detached, witnessing self.

This makes advaita vedanta available to all and converts a purely philosophical framework into a socio-religious framework.

How is mokSa and nirvAnA different..?

In the repeated births and deaths that happen (punar api jananam, punar api maranam), mokSa, the realization of detached self/brahman leads to beings with no fear of birth or death.

The english word 'liberation' could indicate mokSa only if it is about liberating from the attached self and developing a detached self, which leads us to see our body as another body in the sea of bodies, see multiple perspectives equally and this guides our evolution of buddhi. This mokSa is available to all types of people.

In contrast nirvAna specifically means sound-less. vANa means sound. nirvANa is soundless. It indicates the 'calming' or 'thoughtless' state. The english word 'liberation' could indicate nirvANa only if it is liberation from the 'sounds' and quietening.

In the repeated births and deaths that happen, quietening of mind leads to no fear of birth or death. But this means  we need to give up our life or become ascetic to truly realize it. To enjoy the fruits of realization, one has to give up everything, an ascetic with a quietened mind. Further evolution of buddhi is not even considered here.

But a lack of indepth understanding of these two concepts leads people to say shankara copied nirvAna as mokSa in advaita.

Advaita or shUnya matas are socio-religious (dogmatic) frameworks that suggest ways of 'realization' to people. In that way they are 'matas' (opinions or ideas).

In comparison, saMkhya or vaiSeika are not socio-religious frameworks at all. They do not suggest any living ways or realization, nor it is their intention. They are simply models or design patterns or templates that detail how our Universe and our body might exist or work.

saMkhya models this Universe as an interplay of puruSa and prakRti based on puruSa-stri model of upanishads. It details this model more granular level. saMkhya simply means all that is known. It is a design pattern for all that is known.

vaiSesika models this Universe as an interplay of pancha-bhutas and parmaNus that make these pancha-bhutas. vaiSesika is about a 'special' (viSesa) subject and that subject might well have been 'physics' in modern terms.

Comparing saMkhya/ vaiSesika with Advaita / shUnya matas is like comparing 'theory of everything' book by Stephen hawking with Bhagavad gita or quran or bible.  They deal different subjects.

We know very less about cArvAka, even lesser than vaiSesika or saMkhya. Most of cArvAka ideas come from literatures that refute or condemn them. For eg. Jain literatures, rAmayaNa, mahAbhArata talk or quote them only to condemn them.

arvAka means 'this side' (lower side). cArvAka is about our side, in comparison with thinking about on the 'other side' (atman, brahman etc).

If people want rAma back in Ayodhya, don't worry about vows made to a dead father, just go back and help them. After death, there is nothing more and vows made to father are also dead along with him.  After killing all relatives, elders and ordinary people in a cruel war, what's the use of Yudhistra doing Yajnas and living as an emperor..? Better die as he cannot enjoy that life. These are some thoughts classified as 'cArvAka' thoughts (12).

To me cArvAka are more about a materialistic social framework than any philosophy or religion. It's about materialistic enjoyment not adhering to any rules as seen in rAmAyaNa example and not believing in redemptions based on beliefs (like Yajna is going to redeem yudhistra).

Shankara did not call for everyone to become ascetic and give up enjoyment. Advaitins can very well enjoy life materialistically like cArvAkas, not follow social rules.  Advaita simply gives a way to enjoy life with a detached self, that leads to no fear of birth, death or the pains.

Advaita is not about liberation in the sense of reaching a swarg or narag. It is not even about cutting rebirth as it is colloquially understood. If we realize the brahman, the detached witnessing self inside us, then, there is no fear of birth and death. In this case, here and then, there is mokSa.

Is Adi Shankara, the first fundamentalist..?

The NHI article says Adi Shankara is the first fundamentalist of sanatana dharma in the sense that he brought back the 'belief' to vedic scriptures in comparison with other schools of thought in sanatana dharma (hinduism).

The matas (ideologies) that Shankara refuted (shUnya matas) were opposed to vedic scriptures. Hence the question of fundamentalist belief breaking other beliefs within the same dharma does not arise at all, as there is no competition between them at all.

Further what Shankara actually propagated in advaita vedanta is not really a belief, but a rational to be dispassionate observer, to say the least. Rather Shankara brought out the collective understanding of vedic scriptures in a simplistic way for the understanding of the masses.

1. Indian philosophy beyond Vedanta: Meet the Charvakas, the realists and sceptics (nationalheraldindia.com)