Does Rgveda indicate speed of light..? 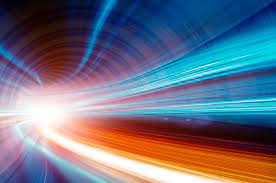 There are a lot of internet 'stories' and 'posters' talking about Rg veda indicating the speed of light. Here is my analysis of it.

The suryas of the Universe including all the stars that progress at night,  burn the janA (particles) as if in agni/fire and their brightness is carried by this agni deva moving forward, the created jyoti/flames cross over the universe (causing) visibility, manifesting a pleasing Universe.

sAyana translates sUrya as 'Our Sun', which is not surprising.  He understands Rg veda 1.50.4 sloka as "Surya produces the jyoti which crosses over swiftly the Universe. Universe is illuminated by Sun's radiance".

Surya is the leader of others in the dharaNi, the earth. It is capable of greatly enveloping the earth. It progresses 2202 yojanas in half nimesha. sAyana (not rig veda) gives this figure.

Since the Rg veda sloka talks about 'Surya' jyoti switfly crossing the Universe, sAyana remembers the speed at which sun envelopes the earth by crossing 2202 yojanas in 0.5 nimisha.

Irrespective of what its value is, this shows that there was a 'specific' value assigned for light to reach the earth.

From arthasAstra alone Yojana is 16.4 kms, nimisha is 120 milliseconds.

From artha sAstra alone, the values of Yojana and nimisha seem to match the modern value of speed of light.

Why I call it curve-fitting..?

Though my entire definition of Yojana and nimiSha is from artha sAstra and straight forward, I termed it as curve-fitting. The reason is 1 pAda, I assumed as 30 cms. Now this is my mapping, based on how we use pAda now (as 30 cms).

Artha sAstra defines angula as equal to the breadth of middle-finger of an average man or 8 yavas, where 1 yava is size of a barley. These are difficult to translate into current metric measurements. The only nearest measurement I could get is pAda which is used till now as 1 foot or 30cms. This could be wrong.

Points to be noted

sAyana uses the phrase 'smaryata yojanAnAm", which means it is to be remembered/recollected.. So somehow in some text sAyana got the information that surya jyoti travels 2202 yojanas in ardha nimisa. He recollects it when talking about the Rg veda sloka which talks about surya jyoti swiftly spreading in the Universe.

Thus sAyana does not define the yojana or nimisha or the numbers 2202 and 0.5 nimisha. He is merely recollecting that number from somewhere he read. So it should have been in some scripture which we lost.
So yes, sAyanA seems to indicate a right number for speed of light, if we correlate it with measurements of artha-sastra, as I defined here. Even if it is a right or wrong number it is 100% certain he indicates that light travels at a 'finite' speed.
But it is not from Rg veda, but probably some scripture that we might have lost.