kanyA dAnam - Is it patriarchal..? 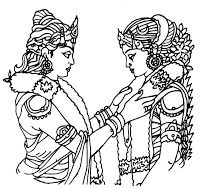 The sequence of kanyA dAnam, pAni grahaNam and sapta-padi convey a specific set of meanings. They have to be seen together as a series of steps and not stand alone procedures. These are common across different grhya sutras that different  communities follow.

Often people say that kanyA dAnam is a regressive patriarchal procedure as kanyA is traded as a property or given out (dAsyami) by father to a groom.  Is that what is conveyed by our grhya sutras..? Let's see.

What is kanyA dAnam..?

Human beings are supposed to have evolved from primates like chimpanzees. It is estimated that  70% of human genome could be  similar to that Chimps (15% to that of gorillas), stating how closely we were to Chimpanzees in evolutionary tree (2). Chimpanzees have a patrilinear society in which males tend to stay together in groups, while females move out into other groups(1). This helps avoid in-breeding and enables better natural selection processes.

The practice of female going out of a family for breeding thus stems from the time of chimpanzees. kanyA dAnam is a procedure of patri-linear tradition, wherein females move out to newer families to avoid in-breeding. In humans this is ensured by females changing their 'gotra' and becoming part of the new family.

Thus kanya dAnam is a patri-linear tradition adopted for giving natural selection processes to work better. The question that we ask is, does kanya dAnam denotes male superiority..? (is it patriarchal..?)

All our sAstras and scriptures are clear that we own nothing and can transfer nothing to others. What we own actually is 'attachment' to beings or objects and nothing else. We cannot own any being or object. We own only our attachment to them.

dAnA is an act by which we give our 'sole' attachment to an object or being and enable others to develop attachment on something/someone we were attached with earlier.

In Go-dAna, we enable someone else to develop that attachment with the 'Go' (Cattle) that we were attached with earlier.

In bhu-dAna, we enable someone else to develop attachment to the land that we were attached with earlier.

In jnAna-dAna, we enable someone else to develop attachment with information/knowledge that we had developed or were attached with earlier.

In shram-dAn, we enable someone else to use or attach with fruits of our labor, which was earlier attached only with us.

In rakta-dAna, we enable someone else to use or attach to our blood that we had developed or have been attached with earlier.

In this light, kanya dAnam is giving up our 'sole' attachment to the kanyA of our family and enable the groom to develop attachment with our kanyA.

But kanyA dAnam is not giving away our kanyA to someone else. So the question of kanyA being a property or a male giving her away to another male does not arise at all.

kanyA dAnam is performed by parents together. Basically the parents (father and mother together) or the guardians as a couple, perform this procedure. So there is no masculinity involved in it.

What is being given by them is their attachment to the kanyA, which is given to the groom, to enable the bride and groom to attach to each other and grow/evolve further.

Why are they giving up this (sole) attachment to our kanyA and enabling the groom to develop that attachment..? The kanyA dAna mantra explains this very well.

This mantra is common to many grhya sutras and recited during kanyA dAnam ceremony. The father recites this mantra, with the mother on his side.

The bride's father tells the groom, that he is giving the Lakhsmi (the kanya bedecked with golden ornaments) to Vishnu desiring brahmaloka.

Since people don't understand brahmaloka, they translate it is heaven. Brahmaloka is not heaven. No scriptures say, people die and go to brahmaloka. So what is brahamaloka..?

Brahmaloka is the world without extraneous aid or a world that is completely independent, on its own (ahaitukam) that sustains other worlds (Srimad Bhagavatam chapter 9.5.22).  It is simply the world of Universe's expanded space (brahma) that holds all the matter and beings of the Universe.

Like the Universe's expanding space that  holds all the matter and beings which evolve on their own,  when bride (vishnu) and groom (Lakshmi) unites, they become the fountainhead of a new generation of families that expand and evolve on their own.

This is the bramaloka desire of the bride's father and not 'heaven' as it is interpreted.

All the divinities (sarva deva) are observers/witness (sAksinya) to bhutas (matter and biological beings) (evolving) in the Universe's expanded space (visva ambara), which is the brahma-loka. The pitrs who have crossed over are so for giving this kanyA.

The devas/natural forces/divinities help the bhutas (matter and biological beings) sustain/evolve on the Universe's space, by being the 'witnesses' or 'observers' of the evolution of bhutAs. Observers drive the evolution (3).  In the same way we invoke our pitrs (ancestors) to be the observers for the evolution of this couple.

Simply put, the bride's father says, Vishnu, this is your Lakshmi. Become independent fountain-head of a new generation that evolve on their own. I desire that brahma-loka from your joining.

So the answer to the question, why we are giving up the (sole) attachment to our kanyA is our desire for brahma-loka. The kanyA dAna mantra explains it as the desire for brahma-loka, the world of brahma, that sustains expansions, like the expanded space sustains the bhutAs of  Universe, with devas acting as observers.

In the same way with Pitrs as observers, the bride and groom unite and sustains further evolution, like brahmaloka (the Universe's space) sustains the evolution of bhutAs.

kanyA dAnam is giving the attachment with the Kanya/bride by the parents to the groom, desiring brahmaloka, the world that sustains evolutions. pAni grahanam is symbolizing a new attachment between the bride and the groom. Sapta-padi defines this new attachment as a type of asymptotic freedom. Hence in a brahmadeya vedic marraige ceremony, they are performed after one another.
All these are defined for a patri-linear tradition, in which males stay together in a family and females move out of family, change their gotras, to enable better natural selection processes.  What we can infer from the above series of grhya sutras is that these procedures are for sure patri-linear in the sense, males don't move out of families, while females move out and change their gotra. But they are not patriarchal (male dominance) or treat women as property or cattle.
The primary confusion on this comes from seeing dAna as giving up 'ownership' rights and not as giving their attachment to the groom, so as to enable the groom to attach to the bride, seeing kanyA dAnam as standalone procedure and not seeing the three procedures of kanyA dAnam, pAni grahanam and Saptapadi as a series of steps after one another. All these three together makes a vivAha.
But one cannot dismiss the fact that for several centuries these grhya sutras have been interpreted by the society as males trading young females between families. Hence the mistaken notion that these are patriarchal procedures.
sampradAyas (traditions) are subject to change. Hence there is nothing wrong in changing and evolving our sampradAyas. So this article does not seek to justify any of these procedures. The idea is to highlight what dAna in reality is, what the kanyA dAnam mantras say, explain why kanyA dAnam, pANi grahanam and saptapadi come after one another.