A look back at our understanding till now.. 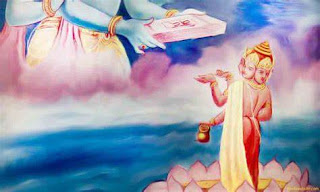 
It's a challenge always to have a starting point in describing Vedas and Upanishad, like starting in a limitless expanded space. I am starting at some point arbitrarily.

Let's start this from the 'devas', which are more easily understood. Devas make our Universe.

There are 33 devas, of which there are 12 Adityas which are primitive (pre-molecular) matter forms and processes born out of creative energies, 11 Rudras which are 11 force-fields of Universe, then there are 8 vasus, which are eight states of atom/molecules based matter forms.

1. Urukrama or Vishnu, the mass component in three generations of particles due to higgs interaction
2. Zatru, the Valence quarks of Hadrons
3. Mitra, the sea quark pairs off QCD vacuum due to quantum fluctuations
4. varuNa, the QCD vacuum (non vanishing quark and gluon condensates of this vacuum)
5. vidhAta, the Charged hadrons
6. dhAta, the Neutral hadrons
7. bhaga, Neutral atoms with electrons to share with other atoms
8. Savitr, the atomic nucleus with multiple protons and neutrons

The four Adityas, the processes that drive the evolution of these pre-molecular forms of matter are

The 11 rudras or the eleven force-fields are

Maruts are the 'quanta' of the force-fields/rudras. They are the 'children' of Rudra (force-fields) and prSNi (quantized).  They are the particle manifestation of force-fields. There are 63 maruts of which are there 49 Pustis/fermions and 14 tuSitas/bosons.

5. Particles that make up the Dark matter

Then there is energy (Shiva) and processing of that energy (Narayana). Shiva, the energy, in the form of dark energy expands the Universe,  is called maha-deva as that expansion started the Universe evolution.

Vishnu - The mass of 'matter' forms due to higgs

Uma/Pravati/Durga- The energy locked in the matter forms

The energy that manifests in the matter forms (vasus) is called in various names. It is the 'vAsavi'. It is primarily, the energy in the Electromagnetic field between protons and electrons  (potential energy) or radiation (kinetic energy).

'diva' are higher luminary forms or stars like our sun. Hence 'diva' is used to denote day, dawn or other higher planetary forms. 'deva' are energy and matter forms that constitute the Universe which dawned. If soma is strong interaction, Suras are those that are distilled out of Soma. Suras are the quarks that are 'distilled' out of strong interaction. Surya is the process of nucleosynthesis. Hence our Sun is called "surya' as it emits light in the process of nucleosynthesis.

A design pattern in evolution of Universe

The observer is the PuruSa. The observed that evolves is the Pra-krti. The characteristics of prakrti like entropy, energy and form that changes are the 'gunas'.

What drives these evolution of Universe cannot be know or only partially known. What we know partially, we term it as 'Atman', the extreme (At) form of manas (man) which is present as 'manas' in all matter forms, biological beings and in the consciousness of beings. This manas or At-manas is virtual, something that is inferred to exist, but cannot be caught or measured by anything and hence is termed only partially known.

The four stages of evolution or brahman

The Universe is said to be evolving or 'expressed' in four stages. The first stage is the 'unknown' part or beyond everything in the Universe. This is the 'parA' or 'Atman'. The second stage is the undifferentiated state of energy or energy bundle that comes out or manifests. The third stage is where Universal matter forms manifest subtly as in quantum domain. The fourth stage is where Universal matter forms manifest grossly as in classical domain.

This is equivalent to a person with mind, with consciousness, sleeping, dreaming and waking up. The waking up is like the explicit/gross state of expression, the classical domain. The sleeping state is like the subtle state of expression the quantum domain. The deep-sleep, undifferentiated state is the undifferentiated energy bundle that manifests. Beyond these three states is the 'manas' of the person with consciousness.

As the 'manas' of the person cannot be taken out of deep-sleep, dreaming or waking up states, the 'Atman' manifests in all parts of Universe, in everything in the Universe. That's where the concept of Aham brahma asmi comes in.

The above is the crux or essence of Vedic literature, as we swam till now. I could have missed some of the learnings.

Almost all my previous posts and books