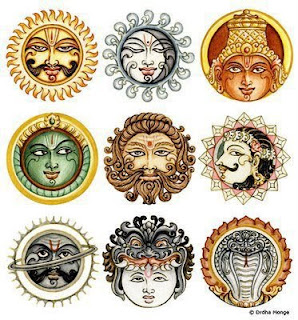 The definition of jyotiSaa in brhat samhita is a person who has multi-dimensional knowlege and makes use of this knowledge to do predictive modelling and make predictions out of them. Since it is not possible for one person to do it all, brhat Samhita calls for a team of jyotisaa to work together and make predictions for a King.

Simply put, jyotiSa is a science of predictive modelling with data from various information sources and using that model to make reasonable inferences about the future. Like it or not, it is just like economics (1).

This is all about information becoming knowledge to make reasonable inferences for future, which are approximations, but which keeps on becoming better and better. A person practising jyotiSa can neither claim to make accurate predictions nor can allow the instincts to over-run the inferences. I had also described the 'luminaries' that have pround impact on planet Earth and they are visible even to our naked eye (2).

In this post, let's understand how the Solar System and the planets might have formed, the reason for the order of days in a week and the design pattern that is seen in this evolution.

deva tarpaNam - The order of days in a week

In the Sandhya Vandana mantras, we offer deva tarpaNam. Deva tarpaNam is offering obeisance to 'devas' by offering them 'water' (saying tarpayami). It's like offering water to guests coming to home to their satisfaction.

In our cultures, whenever we offer anything, we always start from elders or those who originated first and then offer others in the descending order of their age. The same is followed in Deva Tarpanam also.

We offer water (tarpayami) to Aditya, Soma, Angaraka, Budha, Brhaspati, Shukra, Saneeswara in that order. This signifies Aditya, the sun came first, then Soma the moon, then Angaraka the mars, Budha the mercury, Brhaspati the jupiter, Shukra the venus and Saneeswara the Saturn.

So the question is, are the planets that we observe born or were established in this order..?

The answer is, if we believe modern science, the answer is yes. The planetary systems got established with characteristics as we see now, exactly in the order of 'tarpayami' or as in the days of the week.

Not just that, the evolution of planets in solar system also follows a 'design pattern', which became the 'basis' of many 'beliefs' in the jyotiSa, which I will deal with subsequently.

Sun formed roughly 4.6 billion years ago from a Solar nebula which was a giant gas cloud. As 99.8% of matter went into sun, the remaining became the planets around by the Sun by a process called accretion, where by matter remnants continuously stick together by electrostatic force and become bigger and bigger.

From a design pattern perspective, Sun symbolizes the 'source' or 'source energy'.

Earth got established roughly 4.5 billion years ago as a molten ball of lava at that time. Heavy matter forms (metals) sank to the bottom of the molten lava forming the core and lighter forms (silicates) formed the Earth's crust. Gases like hydrogen, helium, methane, water vapour get belched out from the bottom of the molten lava and form the first atmosphere around this planet earth.

The first 100 million years of Earth was a violent time for earth as it got bombarded by comets which brought in more water vapour (3). Earth was also bombarded by rocky objects swirling across the space as at that time a huge rock-sucker planet like Jupiter was not yet born. In the later days, after several billions of years, when Jupiter became huge, it invited all these attacks on itself and even now protects planet Earth from these collisions.

At this point of time, Earth was pretty much covered by an atmosphere filled with CO2 probably due to methane and hydrogen sulphide become Co2 and sulphur. It is in this time, a huge rock hit Earth, devastated and 'dusted' its crust. The dust around Earth soon accreted into present day moon (3).

Thus within the first few hundred million years of birth of Sun, Earth and Moon were born together as a 'bonded' system where moon moves around the Earth.

Though almost all planetary accretions got established in the first 100 million years of formation of Sun, they were not in their current sizes or shapes. This means that Mars, Venus, Earth, Jupiter, Saturn etc were formed but not in the way we see them now. But Earth and Moon got established as a bonded system by then.

From a design pattern perspective, Earth and Moon symbolize the 'bonded' systems or fate that becomes the basis of sustenance and evolution.

The early noachian period of Mars, which is from 500 to 650 millions years from the time of Solar System formation (4.1 to 3.95 billion years ago) had abundant surface water, much like Earth (4). From the mid-noachain period, which is from 3.9 billion years ago Mars started burning up in a process that probably lasted millions of years and soon became the burnt up planet as we see it now with all the surface water gone. Basically because of the small size of Mars, the planetary heat gets radiated away, atmosphere becomes thinner and water on the surface is lost, thus burning up the planet.

From a design pattern perspective, the burning up Mars symbolizes the instability that matter forms undergo.

After 750 million years of Solar System formation or 3.85 billion years ago, Mercury was bombarded which created caters on its surface. It also created a 3:2 spin-orbit resonance lock with Sun for Mercury (5). With Mercury's 3:2 spin-orbit resonance locked with Sun, the planetary orbits of inner solar system became Stable by this time (6), which is vital for further evolution of matter forms and biological life in planets.

From a design pattern perspective, Mercury symbolizes stability of matter forms on which further evolution can take place.

After 800 million years of Solar System formation, around 3.8 billion years ago (7), Jupiter after going through several growing pains (8) which retarded its growth, grew so big as to protect the Earth from bombardments, by attracting the objects towards it, due to is huge gravitational pull.

From a design pattern perspective, Jupiter symbolizes 'continuous increase' or 'increasing entropy' or 'knowledge/information content' that protects the evolution.

From a design pattern perspective, Venus symbolizes 'heat' or 'internal generation of heat in matter forms'

After 4.3 billion years after Solar System formation, Saturn did not have rings. The previous generation of moons around Saturn collided and formed the rings just around 100-200 million years ago (9). The rings seems to be temporary in nature. Gas giants like Jupiter and Saturn radiate more energy than what they receive from the Sun due to internal heat of their core. But those emissions are always in the 'infra-red' spectrum which is the spectrum for thermal radiation.

Saturn is the only planet it our solar system that radiates energy in visible, UV and infrared spectrum, similar to Sun (10). This is due to 'helium rain' unique to Saturn that causes emission apart from the intense heat core. Aptly our Vedic scriptures call Saturn, son of Sun, as it emits much much smaller light compared to Sun, but wider spectrum than Jupiter.

From a design pattern perspective, Saturn symbolizes 'light' or 'radiation' or 'giving out'.

The Order of evolution in Solar System

The design pattern in the above evolution can be seen across multiple domains from beginning of Universe to human social evolution and human characteristics.

In my view, planets have been named based on the design pattern approximately seen and design pattern is not derived from the planetary evolution. For eg. Surya, Soma, prthvi, brhaspati, zukra, sani are Vedic names associated with cosmic evolutionary characteristics, from the times of Universe's beginning. Our planets have been named after these cosmic evolutionary characteristics.

The 'horas' were named after the seven luminaries that affect Earth and they were repeated. Thus a 24 horas day and night had these seven luminary names repeating in day.

But the interesting point there is 'order' in which the names of luminaries were chosen for the horas. That order indicates that those days people had indeed known more than what we knew 100 years back.