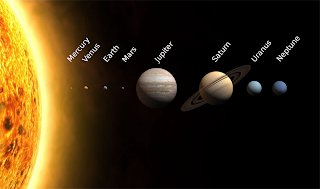 The correlation of information from various fields, applying it on previously known models or design patterns, is what enables the person to extrapolate inferences and not instincts.When things actually span out, the inferences are tallied with actual events, factors that caused the difference are analyzed and understood and a new model created that could be used /refined in future.

This is how the field of economics works. This is all about information becoming knowledge to make reasonable inferences for future, which are approximations, but which keeps on becoming better and better. A person practising jyotiSa can neither claim to make accurate predictions nor can allow the instincts to over-run the inferences.

Now let's look at how the planets are seen in the jyotiSa and in the science as we know now. In this post, let me only explore those 'luminaries' that have most profound impact on planet Earth, as they are even visible to our naked eye. Let me talk about their naming convention in detail later.

The entire solar system came out of a solar nebula which was a large gas cloud or large molecular cloud. Actually a large part of this gas cloud became our Sun (Surya) due to stellar nucleosynthesis. Let me discuss why Sun was named 'Surya' later.

The other smaller part of this ancient solar nebula became 'Jupiter', the largest planet in the Solar system. Since Jupiter is the largest planet in our solar system, it is called 'Brhas-pati', which means the Largest one. Brhaspati is actually a large gas cloud with a very little or no core in it. It is primarily a Hydrogen gas cloud with some amount of helium and little ammonia. 'Guru' means 'heavy' one. Brhaspati is called 'Guru/Heavy' because its mass is 2.5 times that of all other planets combined(1).

Since Brhaspati does not undergo nucleosynthesis, it does not generate its own light unlike the Sun. But due to its huge size, it impacts the orbits of all planets in the solar system (except Mercury) including Earth aligns their orbit with its own orbital plane. Thus the 'Guru/Heavy' Brhaspati is the silent 'observer' that evolves the Solar system (like the heavier dark matter evolving the matter forms). Hence is called the 'puruSa'.


A puruSa is the observer of evolution that drives the evolution and prakRti is the one that evolves. The solar system's evolution is driven by brhaspati, the Jupiter. The Earth's water (and hence its subsequent biological evolutions) is said to be caused by the gas giant Jupiter in the solar system (2).

The brightest planet in Solar Sytem is Venus. But more important, Venus is antithetical to all other planets in the Solar System. It is the only planet that rotates around the sun in clock-wise direction, while all other planets including Brhaspati rotate around the sun in anti-clockwise direction. Hence it is named after the Guru of asuras, Zukra (as opposed to Guru of Devas, Brhaspati).  I will deal with this naming convention more in detail in later posts.

Planet Earth is called 'bhUmi'. 'bhU' means 'existence' of life. bhUmi is the planet where life comes to existence.

Curiously Planet Mars is called 'bhauma', that descended from bhUmi.  Since Mars was supposed to have water in the past, there are theories that life on Earth came from Mars. But if we believe the jyotiSa, it is possible that Mars got 'spun' off from a Planet Earth which had water in it. That explains how water is present in Mars.

Mars is also called 'Angara' which means the burnt-up one or charcoal. Mars is indeed a 'burnt-up' planet where the water has evaporated due to a thin atmosphere. If Mars indeed had spun off from Earth in some way, it is possible that the small size of planet Mars could not hold the atmosphere for long. As the atmosphere dissipated, the resultant heat/fire would have made the surface water to get evaporated.

The satellite of Earth is called 'Candra'. 'Candra' means the reflecting one. Since moon reflects the light, it is named 'Candra'. The light given by Candra is not its own, but caused by someone else.

Planet Mercury which is closest to Sun has an interesting story in jyotiSa. It seems one of Brhaspati's wives named tAra ran off with Candra and they together got a Son called Budh, which became a planet by itself.

If we tie up this story to celestial happenings, it is possible one of the Jupiter's satellites wavered off from Jupiter's orbit and hit Candra. The collision resulted in acceleration of the rock that hit Candra, which got caught in  Sun's orbit and became Mercury the closest planet to Sun.

While this is just an inference, that our Moon got hit by a collision as indicated by its craters, Jupiter has large number of moons out of which some could easily veer away from orbit, some of those moons have similar to Earth with water-ice, both Moon and North-pole of Mercury has icy deposits indicates these events are thoroughly possible.

Unlike all other planets in solar system, Mercury has no atmosphere or very little of it. Since there is nothing that covers the planet, it is called the 'awakened' planet and hence named 'Budh'.

Planet Saturn is again an unique planet in the sense it is the least dense of all planets and less than density of water. Planet Saturn can float in a waterbody.  Hence planet Saturn is named 'Zani'. Zana means 'soft'  or that with less density.

Apart from Sun, Moon and these planets that impact the Earth through their gravitational pull, there are two other major events that Earth is impacted by. They are the Solar Eclipse and Lunar Eclipse. Solar and Lunar Eclipses affect the Earth not only affect by their gravitational pull, but also alter earth's magnetic field, affects behavior of biological beings that depend on light and confuses them (3).

These Eclipses follow a cycle called 'Saros' cycle. Any two eclipses separated by one Saros cycle share similar characteristics. They occur at the same node with the Moon at nearly the same distance from Earth and at the same time of year. The 'Saros' Cycle repeats itself with a periodicity of 6,585.32 days which is 18 year 11 days and 8 hours.

There is a relationship between Saros Solar Cycle (rAhu) and Saros Lunar Cycle (Ketu). After a given lunar or solar eclipse, after 9 years and 5.5 days (a half saros) an eclipse will occur that is lunar instead of solar, or vice versa, with similar properties. That is, rAhu and Ketu are spaced totally opposite to each other (5).

Remember I am not describing rAhu and ketu as lunar ascending and descending nodes as seen from Earth, but as Saros cycles of 18 years which is what jyotiSa says as rAhu and Ketu's duration to repeat themselves.