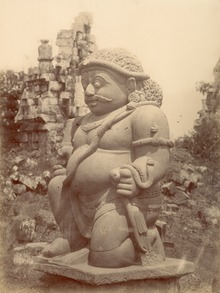 Rsis of the Vedas are not human beings. They are symmetry breaking events that originated everything in the Universe (4).

There are ten types of Higgs couplings to particles which are the ten prominent avatars of Vishnu These ten types of Higgs couplings defeat the weak decays, win over them and establish the ten particle types over three births/generations. This is the story of ten avatars of vishnu defeating the daityas over three births/generations (18).

Jaya and Vijaya are the 'door-keepers' of the Weak-field.

Jaya is the 'door keeper' that decays particles (allows interaction with weak field in such a way) that it originates new particles out of QCD vacuum.

Vijaya is the 'door keeper' that decays particles (allows interaction with weak field in such a way) that it originates new particles out of QED vacuum.

The three births of  Jaya and Vijaya

daityAs are those particles that are subject weak decays that manifest and lead to newer primitive and composite particle types out of QCD vacuum. These daityas manifest not only in the early universe, but all through its life. The daityas, the weak interactions play a huge role in nuclear fusion, radioactive decay and such processes of Universe which are needed to evolve the Universe's matter and beings.

A class of daityas are the 'dAnavas'. dAnavas are those decays that lead to class of leptons (electron, positron, muon, tau lepton etc).  These are the particles that are subject to weak decays but they give rise to particles from QED vacuum.

dAnavas are said to be 'sons' of dAnu. dAnu is the electromagnetic energy that originates the class of leptons. 'dAnu' means a 'drop of fluid' or a 'dew-drop'. dAnu is the energy that creates independent 'drops' of particles.

dAnu the electromagnetic energy out of which new particles evolve is visualized as a 'wife' of kAshyapa, the electroweak symmetry breaking event.

daityAs and dAnavas of early Universe

The early Universe post Electroweak symmetry breaking epoch was dominated by Weak Interaction or weak decays which lead to variety of primitive and composite particles.

This lead to Hadron epoch of the Universe in which Hadrons (Composite quark based particles) dominated the Universe. But these hadrons eliminated each other. This is the time daityAs dominated and mahA-Vishnu took several avatars to overcome the daityAs (the weak decaying particles). This corresponds to the satya yuga and treta yuga.

As the Universe expanded, the energy density of the early Universe fell resulting in lepton epoch or epoch in which particles arose out of QED vacuum. This is the epoch of the 'dAnavas' in which electrons, muons, tau lepton and their anti-particles dominated. This corresponds to dvApara yuga.

Sura are the particles that makes the atomic nucleus. They are the nucleons. Surya is the nucleo-synthesis process (19). asura are the non-nucleons.

Asura are the mesons, baryons (non-nucleons) that do not become the atomic nucleus. These are all subject to weak interactions and hence called 'daityAs' as they decay due to weak force back into QCD vacuum and arise as newer type of particles.

These particles that arise out of the decay are also further subjected to weak interactions and they become lighter particles than before. Hence asuras are said to have power to change forms continuously.

Some of these particles decay to QED vacuum and give rise to leptons. These are the dAnavas. Hence some of asuras (non-nucleons) are daityas and some are dAnavas.

Hence the name such as asuras, daityas and dAnavas are interchangeably used.

Abduction of Paulomi by Indra - Capture of Electron by Proton

Then finally paulomi, the daughter of puloma dAnava is born. She is the energy of the electron. Indra (energy that binds the proton) abducts paulomi (electron) and makes her IndrAni or Saci (a satellite). IndrANi means wife of Indra. 'Saci' means a 'satellite'.

Pula means multiple. Uma is a wharf or docking place. Puloman are the decays of composite quark particles as well as heavier leptons through multiple ways which gives rise to electrons out of QED vacuum.

The energy that makes the electron is called paulomi.

kAlanemi - Particles that decay to muons

kAlanemi are the decays that lead to heavier muons.

kAlanemi is the son of HiranyakSa, the weak decays to QCD vacuum but which gives rise to muons out of the QED vacuum. This is the stroy of Hiranyakasipu cursing kAlanemi and his sons to be born in pAtAla only to be reborn as kAmsa and his relatives.

kamSa the incarnation of kAlanemi is overcome by Krishna. Krishna are the higgs coupling with muons.  Hence kAlanemi, kamsa are various decay modes that leads to generation of muons. This marks the dva-apara Yuga (20).

This maya, the particles that decay to their own class of particles, is said to be an 'architect', like Tvasta and visvakarma.

Tvasta is the creator of Quarks that serve as the vehicle of binding energies (due to strong interaction) that create the protons and nucleus. Hence Tvasta is said to be a ratha-kAra, the chariot-maker.

Visva-karma is the creator of neutral atoms, complex elements and compounds due to electromagnetic interaction and hence the 'maker' of the Universal matter.

mayA the self-decays by creating particles of its own class through weak-decays is also said to be an 'architect' as the weak decays leads to newer particles of matter.