Invocation is Worship - An analysis 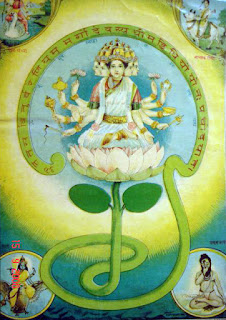 Worship in Vedic dharma is to get the divine inspiration from the characteristics of 'devatha' in us. Vedas talk about several 'forces' such as Atma, Purusha, Agni, Indra, Adityas, Rudras, Vishnu, vAyu etc that guide and evolve the Universe and its intelligence.

During the vedic times several of these divine forces were extolled to invoke their power in us so that we evolve further in our intelligence, learn from these 'forces' and become capable of solving the challenges we face in our daily life.

This was the concept of ‘worship’ in the Vedic dharma. Mantras, Yajnas, Homas and Poojas were meant to invoke the deity in us.

pUrva-mImAmsa - The earlier reflection on Vedas

mImAmsa is translated as 'profound thought' or 'reflection' or 'examination'. It is the 'reflection' or investigation of Vedic scriptures that resulted in development of Vedic worship rituals such as 'Yajna', 'homa' and 'puja'.

But over a period, the realisation and learning from rituals lost steam. Worship become just a ritualistic procedure devoid of logic.

The advent of Buddhism and Jainism to oppose a purely ritualistic mimAmsa lead in turn to 'philosophising' of Vedas and advent of Vedanta.

Why do I say worship is invocation..?

SavitR is the energy in the atomic nucleus (16).

The protons are positively charged. Hence two protons can never combine. But multiple protons are the basis of multiple elements which create this Universe. But this electromagnetic barrier is broken and protons fuse together creating new elements.

SavitR indicates this barrier-breaking and creation of new elements. This savitR is facilitated by Brahma, the curvature of spacetime leading to physical compression (gravtitational collapse) or Bhrgu, the quantum tunneling. Hence SavitR is associated with Brahma as well as Bhrgu (16).

In a way our minds are 'charged' or 'biased'. New thoughts do not come into our mind as they get repulsed by our existing biases. By meditating on Savitr, we want to inspire ourselves with that ability to overcome our biases, which then helps our mind to fuse with new thoughts and develop our knowledge, much like how neutrons help protons to fuse with each other.

This is the 'secret' of Gayatri mantra. Gayatri mantra is all about invoking (prachodayat) the most respected Savitr (tat savitr varenyam) in us/our thoughts (dhiyo yah nah) that produces all the luminance of this Universe (bhargo devasya dhimahi)..

In the Sandhya Vandanam procedure, that is followed by Brahamanas till date, after the Pranayama, the following mantra is recited, which are from Maha Narayana Upanishad.

The indivisible akSaram,  becomes/attains (AyAtu) the 'brahma samhitam' (collection in spacetime) due to the granting devi (varada devi) gAyatri, the mother of chandas (the verses), invoke in core of my heart (juSa sva me) that spacetime (brahma)

gAyatri is the 'meter' or Chanda, which is a 'collection' of akSaras that makes the 'knowledge' of the Universe.

When indivisible atoms become a collection, they become the matter and biological beings, which are the knowledge /entropy of the Universe.

When indivisible thoughts in us become a collection, they become the knowledge of us, the human beings.

We invoke the space in which this collection of thoughts/atoms manifest in our heart. (juSa).

This collection of atoms/thoughts is called gAya-tri because it is 'sung' (gAya) in three (tri) lines.

The divinity, the thoughts around that divinity (dhimahi)  and invocation of that thoughts in us (prachodayAt). This three-line collection is the gAyatri. Hence any divinity's gAyatri mantra follows this pattern.

Invocation of gAyatri, Savitri and Sarasvati

Subsequently the following is recited from maha-nArayaNa upanishad

This is the Sandhyavandana mantra that everyone is supposed to recite three times a day. This is not just a 'ritual', but a message to ourselves.

This invocation of 'divinities' and their characteristics continued through the itihAsa and purANas.

We did not 'worship' Ram to obtain favors from Lord Ram. We all know Ram was a mortal man, though an incarnation of Lord Vishnu. Why do we invoke Ram..?

We invoke Ram, because his life had a message. We invoke that message.

Follow the dharma at all times. At times when we are forced to veer off dharma, atleast follow the Sastras. And never repeat that mistake (of not following the dharma) again in our life. And be rest assured for whatever mistakes we committed, we will get them back, for there is no pardon, no escape in real life. This is the message of Ram's life.

Ram followed the dharma of his time very meticulously. When he was asked to go to forest, he did not raise even his eye-brows as at that time, King’s word was the Law. He obeyed the law as a law abiding citizen.

But he veered off the Dharma in his fight with Bali. Dharma clearly prohibits a person attaching another, who is not fighting with him. But Rama killed Bali with his arrow.

Ram's circumstances pushed him to veer off the dharma (which happens to all of us). But then he followed the Sastras at that time, as Sastras say that an arrow that crosses seven trees and hits a person no longer belongs to the person who released it.

It is highly possible that such an arrow that crosses seven trees would not have hit Bali or hit him very meekly showing off Ram to Bali, which would put Ram in danger (as Bali would get Ram's strength). Ram need not have to follow the Sastra, as following the Sastra would put his life at risk.

But Ram chose to follow the Sastra though he had to veer off the Dharma. He killed bAli through deceit, though he can claim he followed the sAstras, though not the dharma.

But Ram resolved that he would never again veer off the Dharma. In his battle with Ravan, at a time when everyone was fatigued and wanting to end the war, Ram had a chance to kill Ravan. Ravan had been made defenseless and was willing to die as he had been defeated.

But Ram had resolved not to veer off Dharma again. He let go Ravan. In fact it was highly possible that Ravan would come back with double the vigor and Ram might not have won again. But Ram took the risk, as he did not want to veer off dharma again.

We worship Ram to invoke those attributes of Ram in us. Take pains to follow the dharma and if we veer off, do according to Sastras and never repeat that mistake again, even if it means risking the life.

Hanuman was a meek monkey according to Valmiki. Hanuman sincerely wanted to help Sugriv. He did whatever he could.

Hanuman’s transformation happens when they were searching for Sita. Having to cross a huge ocean that they have never seen before in their life, the group of monkeys (or primates) were resigned to fate of futility.

That’s where Jambavan stepped in and propped up Hanuman. That was the transforming moment for Hanuman. Not just that Hanuman realized the physical prowess in him, but Hanuman became more astute, courageous and confident. From that moment there was no stopping of Hanuman. He could do anything.

We can see this Hanuman moment in many of us, in our life. A moment that transforms us, brings out our inner persona forever.

So many sports players, politicians, businessmen have their Hanuman moment in which they get transformed into someone else. Their inner persona comes out in full force and nothing can stop their march from then on.