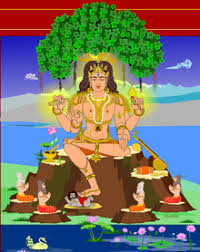 Here is the post (4) that I made on a 'snippet' from dakSinamUrthy Stotram written by Adi Shankaracharya.

The sloka and its meaning

When we are sleeping, we see events happening around us. But that’s not the reality. It’s a perception. There is duality here. There is one reality and second our perception. This is dvayam.

The Universe is like this, a ‘city’ seen inside a mirror. What we see inside the mirror is not the reality. It is the reflection of the City. The City has buildings, lanes big and small. The city has people moving all around. All these are inside (our) mirror. But neither the sizes, shapes, characteristics of what see in the mirror are original characteristics of the City.

What we understand from the image of the City in the mirror is our perception. What the real city is, the reality. There is this duality here.

This maya and mAyA arises when our thoughts are bonded, attached to the physical bodies and the worldly beings.

When mAyA, the self-perspective is defeated by bringing in multiple perspectives caused by detached observing thoughts, we evolve further and further. This Observer driving the evolution of Universe is a design pattern of Universe (2).

Hence this Atman which manifests as detached, observing thought in us, is described as the 'Guru' in Guru Gita (1).

This Guru is the dakSinamUrthy.


Another snippet from the same sloka

Physical body (deham), Breathe (prAnam), also (api) the senses (indriyani) are wavering/unsteady (calAm) and buddhi is also empty/void, wise with such opinion (vidhu), are worriers/confused people (bhrAnta), afraid (bhiruzam) as the 'self' /minds (aham) of women (Stri), young (bala), the blind (andha), the senseless (jada) in this way (iti).

Wise who are with opinions that physical body, breathe, senses are all fluctuating and buddhi is also empty/void are worriers/confused and fearing like the 'self' of women, young, blind and the senseless.

According to Shankara, the Universe exists. It is not void or vacuum.  But the way it appears to us is due to our  self-perspective and hence illusory (as a city seen in mirror).

When our thoughts are attached (vyamoha) to this self-perspective, then mAyA, the illusion arises in us, giving us false depictions of Universe. The one who eliminates this mAya, the attachment to self-perspective is the 'Guru'.

The 'Guru' is the Atman, which manifests as the detached, observing/witnessing thought in us, that makes one see  multiple perspectives, that makes one own the entire Universe, its matter and beings.

This Guru, the Atman is the seed from which this banyan tree of Universe came. This Guru is dakSinamUrthy sitting at the roots of banyan tree (of Universe).

Surrender to this Guru, develop the detached, observing/witnessing thought. Let the Atman manifest.

Why should even wise develop mAyA..?

Shankara is talking about 'Vidhu', the wise and not foolish people. The wise are those who are knowledgeable, who hold and process information. Why should they consider this Universe as void and vacuum and ultimately nothing exists..?

It could be because they discount all sensory perceptions and become like a 'Jada'.

At the first look, it appears that Sankara called Stri as brAntha or confusers/worriers. Sankara worships Shakti in several slokas which is a feminine version of divinity. So does he really berate women..?

Sankara is describing the 'Vidhur' the wise people. If it is to berate these people (with ideology of universe is empty) then why should these people be even described as 'vidhur'..? They could be described as fools or idiots.

It's a fact that women have large pre-frontal cortex and process lot of information leading them to be worriers. But it also gives them the ability to make in-depth and informed decisions.

So Sankara's point is when we think too much or less, when we lack emotions or have over emotions, we get to develop fears and confusions which leads to wrong conclusions (in his view) of Universe being nothing.

Surrender to the Guru in us

According to him,  the Universe exists, but it is our self-perspective, our illusions that make us see universe in a particular way like a city seen inside a mirror. The Guru dakSinamUrthy is the Atman which manifests as detached, witnessing/observing thought in us. If that detached observing/witnessing thought manifests in us, then we own the entire Universe and its beings, we develop multiple-perspectives and evolve further and further.  So surrender to the Guru dakSinamUrthy.