Rsis of the Vedas - Part 9 (daityAs and dasavatharas) 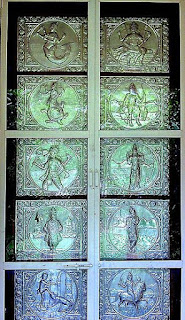 purANa means a thing of past. Something belonging to very ancient times or more precisely the 'first of the times'. The ancient times of purANas are much before times of the human beings and even planet earth. They describe the 'what' of the cosmic events at the origins of Universe in form of Human stories.

'Iti-ha-asa' means, thus it was.  ItihAsas describe how it happened, in much more detail.  itihAsas could be detailed descriptions of any thing. purANas are top-level summary of events that happened.

If purANas are description of cosmic events in human story forms, itihAsas are legendary tales mixed-up of purANic stories and what really happened with human beings.

Let's say there is a person named 'proton' who lived with many exploits that are documented for future. When a future civilization looks at it without complete understanding, then it can mix up the person proton with actual proton which make the atoms.  Hence we can generate stories that say how proton, the emperor hides himself in miniscule space, becomes immortal and creates the whole Universe. This is what is happening with our purANas and itihAsas.

Rsis of the Vedas are not human beings. But they are symmetry breaking events that originated everything in the Universe (4).
The Rsis till now are described here (13) and here (14).

The energy that manifests in Weak force-field is Diti. The Intermediate Weak bosons are called the 'daitya'.


The fight between Vishnu and daityAs

daityAs are the descendants of 'diti' the destructive energy of the weak force. These are the Intermediate Weak Bosons that appear during weak interaction.

The Intermediate Weak Bosons appear in a weak interaction, only to be overcome arising of another massive particle. Hence these remain intermediate.

Weak force-field causes slow decay of particles into other forms of particles. It is ‘massive’ as it interacts with Higgs scalar field and acquires mass. Since mass is Vishnu, Weak-force-field is called Chakra (Vector field) held by Vishnu (the property of Mass). For more details, refer (15)

Jaya and Vijaya are said to be the door-keepers of vaikuNTha who facilitate the weak interaction of 'particles'.


The 'Oceans' of QCD and QED vacuum

The energy of the QED vacuum is Apa, the Celestial 'waters'.  QED Vacuum is visualized as an 'Ocean' of 'electromagnetic energy' in which non-vanishing photons and leptons are the 'waters'.

'Nara' is used to indicate particles that are subjected to decay only by charges. For eg. Up and down quarks decay by weak force, but they turn into one another. They get totally annihilated only by electromagnetic collisions. Similarly electrons don't decay by weak force. They get annihilated by electromagnetic collisions. These Up, Quarks,electrons are the nara, the mortal matter particles that make all the Universe.

Hence the QED vacuum is also called the 'naras', the waters of  QED vacuum (like Ocean of QCD vacuum)

The hadronic weak decay mode is the Simha. In the hadronic decay mode, the weak decay causes quarks to decay to other form of quarks. Essentially it causes the particles to submerge back in QCD vacuum and arise as different types of quarks.

These two are said to be the 'dvAra-pAlakas' of vaikuntha as these two allow the way in which particles couple with Weak interaction and decay.

In the 'Ocean' of QCD vacuum, the first fundamental particle to manifest is 'Top Quark'.   Matsya is the Higgs-coupling of Top Quark with Higgs field.

'mad' is the 'weak interaction' (from madhu, which decays). matsya is that is filled with weak interaction. Top Quarks weak decay the moment they appear. Hence they are the matsya. Top Quarks don't hadronize as their higgs coupling is so strong that it they immediately decay to other hadrons.

The  weak interaction with Top Quarks is the Jaya, which is purely hadronic decay.

In the Ocean of QCD Vaccum, it is because of the Top Quarks that appear and decay to other hadronic particles, that all the matter particles (and biological beings) are brought to the 'Shore' or 'Land'.

This is the 'matsya' story, wherein a Fish appears and brings all matter and beings to the land.

Kurma is the Higgs-coupling of bottom Quark with Higgs.

Bottom quarks can't exist independently. They manifest as composite bottom quark-anti-quark mesons. This bottom quarks form the 'land/earth' in the ocean in the sense they form hadrons, which is the basis of all matter in the Universe.

The visualization here is QCD vacuum is the Ocean, the matter that manifests on this ocean is the land/earth on the ocean.  This composite quark forms are called the ;kUrma', the tortoise, because kUrma lives in land as well as in water.  But since the hadrons form the land/earth, kUrma/tortoise is also equated to 'Mother Earth'.

Hence this Higgs coupling to bottom quarks is equated to Kurma, the tortoise that can exist in the Ocean (of QCD vacuum) as well as that forms the land. This is the reason kUrma (the hadronizing bottom quarks) is said to have 'held' the mandara mountain during samudra manthan.

The weak interaction with Bottom quarks is Vijaya. It is both hadronic decay and electromagnetic decay mode that gives rise to leptons.

The Universe does not stay like that. It evolves further. This evolution is due to Jaya (the hadronic decay) and Vijaya (hadronic and electromagnetic decay) getting cursed and taking birth again and again forming three generations of particles ten fundamental particle types.

Let me describe the story of curse later. But let's go through the births of Jaya and Vijya.

In the very early days of hadron epoch, when Quark Gluon Plasma was just forming hadrons,  the bottom quark-antiquark pairs should have dominated the Universe. This was the kUrma or the tortoise that formed the land/earth. This is the Mother Earth.

At that time there was this Ocean of QCD vacuum and Mother Earth (or visualize them as 'Eggs') of Bottom quark -antiquark hadrons.

Hiranya-akSa is the Weak interaction of primarily hadronic decay modes, which is decaying into quarks. akSa is 'eye' or 'narrow core' of something. Hence akSa is translated as axle, eye etc.  Hiranya-akSa are the narrow hadronic weak decay modes. This is the first birth of Jaya.

The Electromagnetic decay modes (to photons and then to leptons) is strongly suppressed in this weak interaction.  HiranyakSa results in Bottom quark matter getting decayed and drowned back in the ocean of QCD vacuum.

The higgs coupling to Charm Quarks, the varAha, manifests this time. It brings the J/Psi mesons (which are charm quark-antiquark pairs)  out of this weak interaction decay and establishes a newer particle 'earth'.

The charm quarks based J/Psi mesons lift a new 'earth' out of the Ocean of QCD vacuum defeating the hadronic weak decays that slayed the Mother Earth.

Soon Hiranyakasipu takes over the Universe.  Hiranyakasipu is the first birth of Vi-jaya, the hadronic and electromagnetic decay mode.

The charm quark (J/Psi meson) universe is decayed to both hadrons and photons (and then to leptons) due to Hiranyakasipu. Kasipu means 'bed' or 'couch' etc. Since the decay modes are spread over, it is called the 'Kasipu' (bed of weak decays). This is the first birth of Vijaya

These wide decay-width weak interactions of J/Psi mesons produces strange quarks and muons largely. But these particles are also decayed till nRsimha manifests.

Hiranya-kasipu are the wide decay-width, both hadronic and electromagnetic decay interactions. Hence prahlAda, the electromagnetic mode decay of J/Psi mesons appear along with Hiranyakasipu.

This is how the story of prahlAda (a smaller electromagnetic mode decay) fighting with Hiranyakasipu (the larger weak decay) comes up.

The Quarks that decay into QED vacuum, gives rise to release of high energy photons. This process of releasing of photons is the Virocana.

The photons split into variety of particles. One set of particles that arise are the neutrinos and anti-neutrinos.

The higgs coupling to neutrinos are the 'vAmana'.

Due to the overcoming of weak decays, vAmana, the higgs coupling to neutrinos oscillate across three generations of higgs coupling. Hence vAmana is said to have overcome the three worlds in three steps.

With advent of vAmana, the weak decays are completely overcome and a new Yuga is born. The Higgs field coupling to particles become lightest of all. Hence vAmana is also used to denote 'short' or 'small'.


Parasurama - The Higgs coupling to down quarks creating neutral matter

At this point of time, the Universe filled with charm, strange quarks and mesons based on these. Most of these mesons, which are combination of charm and strange quarks are 'charged' mesons. These charged mesons were annihilating amongst themselves and forming mesons again.

Jamadagni, a symmetry breaking Rishi manifests this time. Ja-mad-agni means born (ja) from the weak (mad) energy (agni).  A new class of matter emerges due to Ja-mad-agni from the existing quark based matter forms.

A new type of Higgs coupling arises overcoming the weak decay of Charm Quarks that were the heaviest quarks in the Universe at this point of time. These are the higgs coupling to down quarks.

These down quarks hadronize with strange quarks creating Neutral Kaons.

Since down quarks create neutral hadrons, they are called the 'brahmana' who destroys the ksatriyas (charged particles). The higgs coupling to down quarks are the 'parasu-rAma'.

The weak decay of vector mesons is rAvaNa. The electromagnetic decay of these mesons is Kumbhakarna.

These Up quarks combine with much more heavier/energetic down quarks and manifest as pions. The Pions are psuedo-scalar mesons with spin 0. This is how rAma gets the 'Shiva dhanuSu' from parasu-rAma (the heavier, previous generation down quarks).

The higgs coupling to Up Quark and Down Quarks make all the matter in the Universe. These are also charged particles. Hence they are the 'Nara'.

Now the Universe is filled with vector, scalar mesons which are all quark based matter. All the quarks from Top to Up quarks have manifested in the Universe.

This is when balarAma  manifests.

Sankarshana means who is dragged away.  Hence the story of balarAma being dragged away from Devaki's womb to Rohini's womb.

Now the Universe is filled all types of Quark based matter and Tau lepton.  The lightest of quarks (Up and down) are present as Pions, the pseudo-scalar mesons.

The electromagnetic decay of these pseudo-scalar mesons, the pions is the ShisupAla. The weak decay of pions leads to photons and there arises a new Higgs coupling in leptonic field. This higgs coupling gives rise to 'Muons', a new class of leptonic particles. Hence shisupAla is said to have been killed by the 'Chakra' (Weak vector field) (16)

Finally Kalki the higgs coupling to lightest of leptonic field arises.  Kalki are the electrons.

The electrons do not get decayed by weak field at all. They can only be annihilated by electromagnetic collisions.

Hence Up, Down Quarks and Electrons from the 'Nara' particles of the Universe. Kalki, the higgs coupling to electrons, absorbs photons, get excited and move around. Thus kalki travels on the 'White Horse' (of photons/light).

Most important, the Universe will end up as a bunch of positrons. That's the positron decay of Universe (17). Hence Kalki is said to be coming in the last leading to end of the Universe.