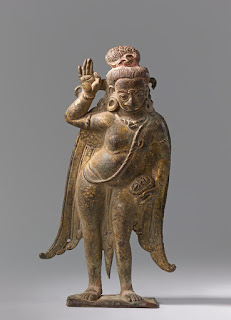 There are twelve Adityas in total.

Of the above eight, QCD vacuum existed even before Rishi Kashyapa (Electroweak symmetry breaking). Hence the rest seven are said to have risen from the dead egg (mrta anda) and called mArtANDa.

Let's see about Kadru, Vinata and their sons nAga and Garuda now.

Rudras are distribution (vibration) of energy associated with a particular force-field. prANa is the energy flow in the force-fields. Due to the flow of energy, different forces manifest.

Energy is an 'abstract' concept in general, while 'forces' are what are clearly perceived. A force is felt by the physical movement or change in entropy of something.

Like Aditi is Creative energy around different matter forms creating them, Diti is destructive energy that decays the matter forms, Kadru are what moves/flows. 'Ka' is what/which. 'dru' is flowing, running etc. Ka-dru are what flows/moves.

Kadru means that which/what (ka) flows/runs (dru). It is 'what flows'.

The forces that results from the flow of energy are the 'nAga'. The 'nAga' (forces),  are hence called sons of 'kadru'(energy that flows).

A force is perceived by some physical movement or change of state or entropy change. A force can never be stationary. 'aga' means stationary.  Hence force is described as 'na +aga', nAga, which means which is not aga (not non-moving).

These forces lie underground as they we don't 'see' them, but we perceive the result of these forces. Hence these forces or 'nAga' are said to be pAtaLa Loka.

The name 'nAga' are used to identify snakes and reptiles as they live in holes underground.

nAga are 'forces' that are produced by the energy flow in the field. Hence they are said to be sons of Kadru (which flows).

When such forces are caused by massive particles they are called 'ahi'. Both nAga and ahi represent the forces. Both are visualized as 'snakes'.

The force produced by massive particles could be color force, electromagnetic force or mechanical force.

The first and foremost famous force in Universe is the force of the Higgs field.  This force is the first force (Adi) starting point of matter evolution in Universe.

It is the 'remainder' (Sesha) that exists even when all other force-fields and particles are gone. It is endlessly (ananta) spread across the Universe's spacetime. Hence this is called Adi Sesha or Ananta Sesha. This is the first son of Kadru.

This is the force that 'holds' all the Universal matter and beings. Hence Adi Sesha, the force of the higgs field is said to 'hold' the earth/universe etc.

Since electromagnetic force is only energy, it is said to be worn around Shiva, the energy.


The weak force of TakSaka

The third son of Kadru is TakSaka. TakSaka is the weak force that separated from electroweak force.  produced by weak charge that decays matter particles over a period. Hence takSaka is visualized as  a venomous killing snake.

TakSaka is depicted as enemy of Shesha nAga. It is because the weak force decays the 'higgs force' slowly over a period and decays particles.


The Strong force of Iravat and Residual force of Airavat

The fourth son of Kadru is Ira-vat.

Iravat/ Airavata are depicted as 'nAga malla" or an 'elephantine force' or huge force that carries Indra. In purAnas it simply becomes a white elephant, but in reality it is called 'nAga malla' or elephant nAga.


Manasa - The force of dark energy

Manasa is said to be another nAga, which is the force exerted by the expanding dark energy scalar field.

'Manas' is the dark energy scalar field that keeps expanding. 'Manasa' is the force produced by this energy flow on spacetime, matter and beings.


The different types of 'ahi'

The oscillating weak force (SvarabhAnu, which become rAhu and Ketu) are also a 'ahi' as they impact physically on particles and produce mechanical forces.

There are zillions of forces produced by massive particles (ahi) and forces produced by energy flow in force-fields (nAga) acting below the surface of matter and biological beings. Hence nAga and ahi are said to reside in  pAtAla loka.

vRtra is the electromagnetic force that attracts the dAnava (the electron) to Indra, the proton.  If electron falls into proton, proton would have decayed.  But Indra ensures the electron becomes like a 'calf around the cow', (enslaving the electron) and creates neutral atoms.  Thus Indra overcomes the vRtra also.

These 'particles with mass' move across the spacetime unlike the forces (nAga) that are point of impacts in a given region. Hence the massive particles are said to be 'winged' and called su-parNa, which means 'well winged'. Hence Vinata is also called Su-parNa.

aruNa is the QCD Binding energy that gives the most mass to hadrons.

The sons of aruNa are said to be the sampAti and jatAyu.

sampAti means flying together.  It is the energy of the gluon-gluon interactions that is a part of the QCD Binding energy. This is a potential energy.

This gluons are massless but have energy.  It is the gluon-gluon interaction energy, a potential energy, that causes the 'mass' . Hence sampAti, though a bird (massive),  is said to lose its wings.

jaTAyu means 'matted'. It is the kinetic energy of the matted quarks and gluons.

Quarks move at near light speeds inside atomic nucleus, because they are massive due to higgs interaction. Gluons are masselss and move at light speeds.

The Kinetic energy of the quarks and gluons is the jaTAyu, which has wings.

Higgs interaction is the nectar of immortality that drives the Universe evolution. It is the amRta.

This amRta or higgs interaction causes an amount of energy to be present in the particle, even when the particle is at rest (with respect to observer).  This rest-energy carries the property of 'mass' (or rest-mass).

The rest-energy due to Higgs interaction is the Garuda and rest-mass it carries is the Vishnu.

Zravas are real mesons/particles that are streamed forth (X). Uchhai-zravas are maximally (ucchai) streaming forth real particles.  These particles are acted on by 'forces' (nAga) at the back (tail).

Garuda, the rest-mass energy, brings the 'nectar' of 'immortality', 'the mass' to particles and thereby makes Vinata win over Kadru finally.


Enmity between Garuda and nAgas

nAga are the 'forces' impacting on particles. Garuda is the rest-mass energy. The forces that impact a particle (nAga) cause its physical motion. The rest-mass energy of a particle (Garuda) opposes this motion and reduces its speed. Hence Garuda and nAga are said to have enmity with each other.