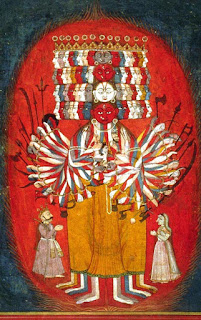 When events in the evolution of Universe and matter/energy forms of the early Universe are visualized as human beings, we end up in bizzare descriptions.

The mythical characters in Puranas, when visualized as human beings, give rise to strange phenomena. We have people being sneezed out from nose, arising from perspiration, born from hands etc. We have characters whose father and mother seems to change with every purANa. We have situations of incest, group-sex etc.

This visualization also gives rise to perception of 'sons', 'daughters', 'Kings', 'courtiers', 'dancing damsels', 'musicians' , 'singers' etc etc and stranger relationships between these. Subsequently this lead to variety of ideologies and philosophies as people struggle to reconcile the puranas with vedas and upanishads.

See them as events, energies and matter forms in the early Universe. Then all the conundrums disappear.

Rsis of the Vedas are not human beings. But they are symmetry breaking events that originated everything in the Universe  (4).

The Rsi's till now


The sons and daughters of Adityas

Eight Adityas are mentioned in Rg veda. They are described as energy that create the matter forms (12). There are twelve Adityas in total according to Srimad Bhagavatam.

Srimad Bhagavatam describes the eight Adityas in more detail  from 6.18.1 to 6.18.8.   Srimad Bhagavatam describes the sons and daughters of eight Adityas as SavitR, bhaga, dhatR, vidhAta, VaruNa, mitrA, Indra and uru-krama from 6.18.1 to 6.18.8. These Adityas, which are the energy around the 'bodies' or 'matter forms' establish the Universal matter forms.

Suka said "The patni of SavitR, the prSni,  the daughter of savitR, the sAVitri (which is) the three vyAhrti, Pazu, Soma being the oblations to Agni, the four-monthed greatly restless/active/sacrifice"


savitR - The energy around atomic nucleus

savitR is the energy around complex atomic nucleus. It evolves in four steps or four sacrifices that run one after another like the cAturmAsya vrata.


cAturmAsya - The 4 vratas that come one after another

cAturmAsya are 4 sacrifices or vows that run one month after another for four months. Vishnu (mass) sleeps in this period of 4 months and the sacrifice in these months belongs to Shiva (energy).

Likewise, four sacrifices or vratas come one another in the sacrifice of 'agnihotra' in which visible matter (pazu) and strong interaction (soma) are sacrificed and complex nucleus gets built. In this process of nucleosynthesis building up complex atomic nucleus, the mass due to Higgs (vishnu) is very little and vishnu is said to sleep.

The four that come one after another in this agnihotra are prSNi and the three vyAhrti. prSNI are the quantized shells of energy that exist inside nucleus. The three vyAhrtis are sva, bhu and bhuva.


prSNi - The quantized shells in nucleus

Pati means 'one who possesses'. It is the 'sthula' form.  Patni is the associated characteristic/property of the pati. It is the 'sukshma' form.  Hence if pati is husband, patni is wife.  The characterists of Savitr, the atomic nucleus is being quantized, exisitng in different energy levels/nuclear shells and hence is prSNi.


sAvitri - The daughters of savitR


Bhu - Matter that holds the energy in nucleus

Bhu means becoming or arising or manifesting. Bhu are the mass through Higgs (matter) that arises or manifests. The massive quarks holds some part of energy in the nucleus. Hence Bhu is a daughter of savitR. Bhu is also mentioned as a form of Vishnu as it indicates the matter with mass.


Bhuva - Energy that manifests in nucleus

'bhuva' is that lives or exists or abides on top of 'bhu'. It is the energy that exists /lives /abides in nucleus on top of matter forms of nucleus.  Hence bhuva is a daughter of savitR. Bhuva is also mentioned as a form of 'Rudra'.


svar - Energy/light that is emitted in nucleosynthesis

This property of emission of light/energy (photons) during formation of atomic nucleus is called a daughter of savitR.

The quantization of energy in nucleus is followed by matter that holds the energy in nucleus, binding energy of the nucleus and light emitted from nucleus during nucleosynthesis.  Like the cAtur mAsya vrata, these four evolve one after another around savitR, the energy around atomic nucleus.


dhAtr - Energy around the hadrons

dhAtr are the hadrons marry the daughters of  'Angirasa' in the sense they acquire these properties of spontaneous and chiral symmetry breaking.

The spontaneous chiral symmetry breaking (raka and anumati) in which quark condensates form losing their handedness on rotation leads to 'sAyam darzam'.  sAyam darzam means sight of letting go free.  sAya means unyoking or unloosing or letting go free.  The quarks are unyoked and they get hadronized.  Since the Sun unyokes in the dusk, that time-period is called sAyam or evening.

The hadronization and hadrons start a new dawn the universe.  These are the prAta purnamasa or the early morning/first full moon. As the QCD binding energy/strong interaction (Soma) of hadrons reflect most of the light in the Universe and hence Soma is called Chandra for that reason. The hadrons thus become the early morning/first full moons that appear in the Universe.


vidhAtR - The energy around charged hadrons

Varuna's carsAni manifests, from whom bhrgu was born again. carsAni are quantum fluctuations of varunA, the QCD vacuum, which manifests as Bhrgu, the quantum tunneling (4).

And the mahA-yogi vAlmiki, indeed took birth from valmika. Agastya and Vasistha from the Mitra-VaruNa.

vAlmiki - The creation of Up quarks

The mahA-yogi vAlmiki, took birth from valmika (of varuNa). valmika is translated as ant-hill. But then the valmika referred here is that of varuNa.

valmika is a 'swelling' that is thrown up from the below the ground/surface. The ants (valmi) from below the ground throw up a swelling over the ground and build their ant-hill. Hence any swelling in the body at neck or legs is called valmika. vAlmiki is the one derived from/descendant of or that results from valmika.

varuNa is the QCD vacuum, the ground state in which non-vanishing condensates and quarks and gluons exist. vAlmiki is that which results from the 'swelling' thrown up from below the ocean of varuNa, the QCD vacuum.

Will describe later, why vAlmiki is the swelling of Up Quarks in specific.

Vasistha and agastya are born to Mitra-varuNa (11).

Agastya and Vasistha were born from semen that spilled from Mitra and Varuna on seeing Urvasi (11).

Revati is the quantum fluctuation crossing a threshold.  Hence Revati is translated as 'shining'.

The particle-pairs emitted or excreted out of QCD vacuum are unbroken (ariSTa) in the sense they don't emit/radiate energy.

'pippala' is used to refer to fig tree that flowers all through the year, whose fleshy fruit covers the flower, thus becoming the rich source of food for host of other animal species.

The particle-pairs emitted or excreted out of QCD vacuum are pippalam in the sense these pairs form the flesh of particles and overflow abundantly on QCD vacuum.


The sons of Indra

Indra is the energy in the Proton with three valence quarks (12).

vRtra is a 'nAga' the electromagnetic force between proton and electron. If vRtra falls on Indra, then Indra would collapse. But Indra uses vajra to slay this attractive force into pieces, becoming the 'one deva' around which the Universe evolves.

Puloma is a dAnava, a lepton or electron. Paulomi is the energy in interaction between nucleus and electron. This paulomi leads to three sons.

Jayantam is the Atomic binding energy of the electromagnetic field mediated by photons..
Rsabham is the Ionization energy to free up the electron in the outermost shell
midhuSam is the Bond energy in the disassociation of chemical bonds.

The vAmana rupa mAya of the urukrama of the deva, through patni kirti in which is seated the  brhacchloka of saubhAga and rest

mAya - The perception of 'mass'

The mass of massive particles (which is a perception and called mAyA) range from minutest in neutrinos (vAmana) to largest in the Top Quarks (uru-krama).

mAya is illusion. Energy is real. mass is an illusion about energy. Ultimately this Universe originates and dissolves into energy. 'Mass' is the perception when energy is impeded by higgs field. Thus the property of mass (vishnu) is called 'mAyA'.

In Vedantic literatures, this 'mAya', the perception of mass became the 'illusion' that covers the reality, as these principles got applied to human society and thus originated 'mAya-vaad',

From vAmana to Uru-krama

Uru-krama is 'large-stepped'. It refers to the most massive particles. There are three generations of mass of massive particles across quarks, electrons and neutrinos. This is the tri-vikrama.

kirti is the property of expression and expansion. The larger worlds (brhacc loka) made of saubhaga and the rest are seated on the expression/expansion of uru-krama to vAmana.

The expansion of matter forms creates the larger worlds on which saubhaga and rest are situated. From this comes saubhAgya which means endowed with matter (wealth).