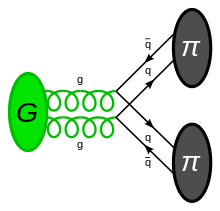 
The daughters of dakSa through prasUti are those properties of force-fields brought out (pra-sUti) by dakSa.


What makes something visible..? It is the breaking of Symmetry. In a human society, those who break the existing symmetries, make new things visible, evolve the society in a new direction are called the Rsi (4).

Now let's discuss about Pulastya and scions of Rsi Pulastya.


RSi pulastya - Excitation of bosons made of composite fermions

Rsi Angiras is the excitation of massless quark condensates that eventually break the Chiral Symmetry leading to 'hadronization'. Hence Rsi angiras is said to be similar to formation of 'Charcoal'.

Hence Rsi Pulastya is the excitation of 'bosons' from composite fermions.

RSi pulastya produces 2 sons. They are 'agastya' and Vizravas.

Vizravas means streams forth, which are scattering of composite particles in collisions of other particles. For eg., due to temporary excitation (pulastya or horripilation), mesons are streamed forth in collision of particles. These are 'real' excitations that can be detected.

Vizravas also means 'heard'. Since these mesons are scattered during collisions, they are said to be 'heard', as they move out in space and are detected (like sound).


Calm (Scalar) and Crying (Vector) bosons made of fermions

The 'real' bosonic particles made of composite fermions can be divided into Scalar bosons and Vector bosons.

'Kekesi' is the 'property of Crying'. These are mesons that 'cry' or have some intrinsic angular momentum. These are Spin 1 particles. For eg., these are the Vector/Pseudo-vector mesons (5).

'ilavila'  is the property of expression' or 'being calm'. These are mesons that are simply expressed without any 'crying'. They do not have any intrinsic angular momentum. These are Spin 0 particles. For eg. these are the Scalar/pseudo-scalar mesons (6).

The Spin 1 particles, for eg, the vector/pseudovector mesons, are the sons of 'Kekesi'. They are asuras and pisacas.

The Spin 0 particles, for eg., the scalar/pseudoscalar mesons, are the sons of  'ilavila'. They are gandharvas and yakSas.

The Composite Scalar and Pseudo-scalar mesons are particles with zero intrinsic angular momentum (Spin 0). These are made of several quarks which are half-integer spin particles, but as composite particle have zero spin.

Gandharvas are electrically charged Scalar/Pseudo-scalar mesons. These gandharvas are always associated with apsaras, which are the electromagnetic radiation produced by particles.


'Gandharva' Marriage - Union of opposite charges

'Gandharva' (or YakSa) marriage is like an union of two oppositely charged quarks, just out of attraction of each other, without involving any other 'large-scale' binding energies (as in say atomic nucleus or atoms).

The Composite Scalar and Pseudo-scalar mesons are particles with zero intrinsic angular momentum (Spin 0). These are made of several quarks which are half-integer spin particles, but as composite particle have zero spin.

YakSas are neutral scalar particles. They have zero spin but are electrically neutral and do not take part in electromagnetic interaction.

YakSas remain 'not attracted', wander here and there and decay to photons or light.  Because of this nature they are often compared to 'ghosts'.

The Composite Vector and Pseudo-vector mesons are particles with integer intrinsic angular momentum (Spin 1). These are made of several quarks which are half-integer spin particles, but as composite particle have Spin 1.

Raksas are electrically charged Vector/Pseudo-vector mesons. These Raksas mediate force on other particles due to their integer spin nature. Hence they are depicted as 'powerful' and also 'evil'.

Charged vectors are at times, excited version of scalar mesons. So they decay to scalar mesons again. This is depicted as RakSas becoming Gandharvas due to liberation of their curse.

The Composite Vector and Pseudo-vector mesons are particles with integer intrinsic angular momentum (Spin 1). These are made of several quarks which are half-integer spin particles, but as composite particle have Spin 1.

Pisacas are electrically neutral Vector/Pseudo-vector mesons. These Pisacas do not attract any other particles, wander alone and decay to photons. Hence they are depicted as 'ghosts'.

'aga' means that does not move. 'agastya' is the result of 'horripilation' (temporary excitation or Rsi pulastya), but that does not 'move'. In comparison with Vizravas which is streamed or let out, agastya does not move. It is excited but remains 'potted' and not let-out.

Agastya are the 'exchange' of 'virtual' mesons that mediate forces like residual nuclear interaction. For eg, excitation of 'virtual' pions in atomic nucleus mediate the residual nuclear interaction, binding protons and neutrons (7). Hence agastya is described as born inside a 'pot'. Agastya is born in the pot of atomic nucleus.

Like the Vindhya range that arises in the collision of land masses, exchange of virtual mesons bind the protons and neutrons into atomic nucleus.

'ap-saras'  is translated as 'going in the waters' or 'between the waters of the clouds'. Ap-saras are the 'excitation' caused by electromagnetic energy/radiation.

Urvazi means 'widely/largely extending'. Urvazi is produced by nara-nAryaNa. nara nArAyana are particles with mass (naryana) and charge (nara) (4). Uru-azi are excitation produced due to electromagnetic energy absorption by quark particles with mass and charge.  Angirasa (formation of quark condensates due to gluons) is said to be 'Uru'.

Rambha is the Electromagnetic excitation of electrons (or muons, tau).

Tilotamma is the excitation caused by Cosmic Microwave Background radiation that exists throughout the 'Spacetime'. Hence tilotamma is said to be daughter of Brahma or Visvakarma, the expanded spacetime.

Ap-saras are said to be dancers, because they are excitations of energy in electromagnetic field. They are said to be associated with Gandharvas and RakSas, which are charged mesons, Indra which is the energy making the proton, visvamitra, which is the production of electrons/photons from QED vacuum.

The spinor particles are particles with some intrinsic angular momentum (half integer spin).  For eg. Quarks and electrons have half-integer spin. They are spinors.

There is one more composite boson that is purely made of 'gluons'. Gluons are mediator particles of Strong Interaction or Soma between the Quarks. But gluons also carry 'Color charge' and hence interact amongst themselves also. Hence Composite gluons form 'bosons' called 'glueball' (9).

This glueball, the composite bosons made only of gluons is the Kuvera. Kuvera is called Vaizravana, because it is a composite particle.

Kuvera is also called as 'Chief' of Gandharvas, YakSas, RakSas and Pisacas which are said to be present in Kuvera's court. That's because Glueballs are difficult to detect and always surrounded by Charged or neutral scalar, vector mesons.

Kubera means only who is 'deformed'. Glueballs are always deformed into other forms of matter. Kubera is the god of wealth because it is the glueballs that originate different quark based matter forms.