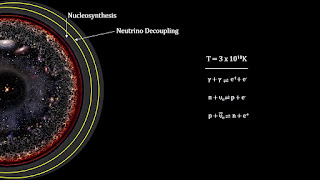 In the 'expanded space' (Brahma) rudras (force-fields) manifest one by one.   The force-fields are different ways in which energy is distributed with different properties. There are eleven force-fields and they are explained here (2).

The three Svaras are  udAtta (High), anudAtta (low) and Svarita (medium). The energy of the weak force-field oscillate between high, low and medium masses.

In the Hadron epoch, the energy of weak force-field is so high that it keeps interacting with protons and neutrons by weak interaction. This oscillates the protons to neutrons and neutrons to protons. This inhibits the formation of stable nucleons or even heavy or excited baryons, as the neutrinos keep interaction with baryons and mesons and oscillating them to other forms.

This decouples the neutrinos. Neutrinos leave and travel all over the space forming what is called Cosmic Neutrino Background.

The neutrino decoupling leads to lighter baryons, heavy baryons and excited states of baryons remaining in the Universe.

This de-coupling property is called 'anasUya'. This is translated as not being spiteful. In other words remaining de-coupled and not having murmurs/oscillations is being 'an-asUya'. Hence Atri is said to have married 'an-asUya'.

Once neutrinos leave, the oscillations between protons and neutrons stop.  This process rekindles the formation nucleons as now protons and nuetrons are unable to oscillate back.The proton and neutron ratio get fixed and that's what progresses the Universal matter evolution.

The neutrino decoupling process stops the interaction of neutrinos with baryons and thus the oscillation of baryons (from proton to neutron to protons) and production of electrons and neutrinos further.

Soma or Chandra as son of Atri symbolizes this predominance of strong interaction after neutrino decoupling process.

datta-atri is called the 'Guru'. Guru means 'heavy'. The weak bosons are massive/heavy and hence weak interaction has become weak.

Weak interaction is about giving up/decay of  'mass' over a period. Hence Dattatreya also became examples of  Sannyasa or 'ascetic' way of live (giving up) and has spawned several philosophies.

This weak interaction becoming weak and 'benovolent' establishing the Universal matter forms, due to a combination of Brahma, Vishnu and Shiva is called as Datta-Atri.


DurvAsa - Son of atri - The unstable states of particles

Before Ati, the neutrino decoupling process, particles could not sustain in excited states for long.

In the pre-higgs Universe, excited states of composite particles of quark (Indra) when faced with durvAsa (excitations of energy) cannot sustain it as they lose their excitation quickly.  Hence devas are advised to do samudra manthan and acquire interaction with higgs (mass).

'Immortality' is the property of matter forms to be overcome weak force decay. Formation of protons, atomic nucleus and elements that are not subjected to weak force decay is the acquiring of immortality of 'devas'.

Two forces play a great role in it. One is the  Strong interaction and other is the Higgs Interaction. Both these interactions cause the property of 'mass'.

Samudra manthan, the churning of Ocean in which Vishnu resides is the process of Higgs field acquiring Vacuum Expectation Value. The nectar or amrtam that is got is the Higgs Interaction. During Samdura-Manthan, Suras (Quarks) drink the nectar (Higgs Interaction) and form various devas.  The mass caused by Higgs on Quarks and Electrons gives rise to protons, elements and more complex forms of matter.

Thus Soma (Strong interaction ) and Amrtam (Higgs Interaction) cause immortality in their own ways.


The 'split' of rAhu and ketu

Most of the Universe is made of charged particles except the neutrinos. Thus Svarabhanu is also often used as a single name for ‘Rahu’. Since Rahu is a charged weak interaction, it is said to have great power, as it decays all charged particles.

The neutral neutrinos do not interact with any other particles and keep travelling across like a ‘ketu’. ‘Ketu’ means a ‘Comet’. The neutrinos are like the comets that keep moving. Hence the neutral weak interactions are called the Ketu.

rAhu kAlam is the time 'impact of neutrinos' causing oscillation of neutrons to protons to neutrons in the early Universe. It's an unsteady state of universe. It is the time when svarabhAnu had cast the 'mAyA' on Indra (protons) and hidden the nucleo-synthesis process. Hence it is believed that whatever we do in rAhu kAlam results in oscillations and does not progress well.

But I have no idea, how rAhu kAlam gets related to the 'timings' of the week.

But any action we start at any time with lot of vacillations is rAhu kAlam. The vaccillations have to de-couple for the action to proceed