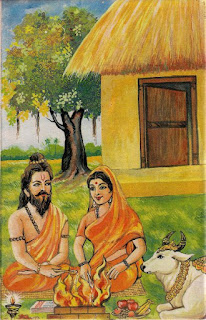 
The daughters of dakSa through prasUti are those properties of force-fields brought out (pra-sUti) by dakSa.


What makes something visible..? It is the breaking of Symmetry. In a human society, those who break the existing symmetries, make new things visible, evolve the society in a new direction are called the Rsi (4).

Rsi Pulastya is excitation of Virtual and Real 'mesons' which are composite bosons.  The excitation of virtual mesons is Agastya (potted in nucleus). The excitation of real mesons is Vizravas,which is streamed forth. These can be Charged Scalar, neutral Scalar, Charged Vector, neutral vector bosons which are the Gandharvas, YakSas, RakSas and Pisacas respectively. The glue-ball is the Kuvera and apsaras are the electromagnetic radiation (5).

Mitra-Varuna produces fractionally electric charged quarks interacting through strong interaction. Such Quarks and Quark condensates are subjected to Strong, Residual strong and Electromagnetic interactions, depending on their place of existence.

Visva-Mitra are the energy in the fluctuations of QED vacuum states. Visva-mitra means universal fluctuations of energy and pair production.  Compared to strong interaction which is a very short range force and the fluctuations that produces pairs in it in short range, the electromagnetic radiation is of unlimited range and is spread universally. The pair-production from Electromagnetic radiation is caused all over the Universe. Hence it is called 'Visva-Mitra'.


The story of Mitra-varuna and Urvasi

Once Mitra-Varuna saw 'Urvasi' the apsaras. Urvasi is the daughter of Sages Nara-nAryaNa.


Birth by spilling sperm on 'seeing' - Exchange of virtual particles

The fluctuations of energy in QCD vacuum produces particles made of Quarks.  These particles have the ability to interact with Electromagnetic radiation due to the property of 'fractional electric charge' they have in them. These quark pairs out of QCD vacuum are the 'Mitra-Varuna'.

Inside the atomic nucleus, the excitation of proton and neutrons (by absorbing energy from electromagnetic radiation or apasaras) results in them binding together by exchange of virtual mesons.

Since Agastya is exchange of virtual mesons, Agastya is said to be son of Pulastya as well as son of Mitra-Varuna.

This introduces a concept called asymptotic freedom, wherein Quarks and Gluons are bound together by strong interaction, but are not merged into each other. This is like a 'marriage' of two beings who are two independent beings but remain bound to each other. This is the Vasistha and arundhati symbolism.  The exchange of virtual gluons is the Vasistha.

This symbolism of asymptotic freedom is what is in the 'bi-star' of Vasistha and arundhati also. Here there are two independent stars, which revolve each other. Hence during marriages, bride and groom are asked to see and emulate Vasistha and Arundhati.

Bridge and groom remain independent, but bound to each other, as in asymptotic freedom.

When quark pairs of QCD vacuum get excited due to electromagnetic energy absorption (mitra-varuna spill sperm on seeing urvazi), they also start interacting with weak field. They exchange virtual weak bosons due to weak interaction and decay due to weak force.

Rishi Matsya is the exchange of virtual weak bosons in the process of weak interaction.

The only quark that is not subjected to strong force (hadronization) is the Top Quark, which decays by weak interaction before it could even hadronize.

Hence Vasistha is the Brahma Rsi and it expresses/establishes Visvamitra as the next Brahma Rsi.