The speed of prANa/ Light - From Upanishads and Artha sAstra 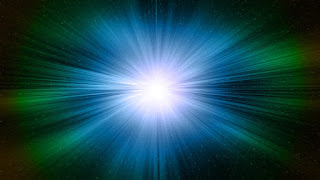 During the cosmic inflation epoch, the dark energy scalar field expanded greatly (Why and How it happened in another blog), creating 'space' with vacuum.  Visualize it as the dark energy expanding suddenly on all sides leaving out an empty space in-between.

The Universe can now be visualized as  a 'swarm' of vaccum energy inside an ocean of slowly expanding dark energy.    The dark energy interacts with vacuum energy, causes excitations in the force-fields of this vacuum energy and establishes radiation and matter particles.

This ocean of dark energy inside which vacuum energy, radiation and matter particles and beings evolve is the 'Golden womb' or Hiranya-garbha. This Hiranyagarbha is the four-dimensional 'spacetime' of the Universe or the 'Womb'  of the Universe.

The Eleven Rudras or force-fields

Manas is the dark energy scalar field. There are ten other force-fields. These ten force-fields  or rudras are the forms or 'rupA' of vacuum energy (stri).


In Standard Model, we can find these ten force-fields or the Rudras.

Manas (or At-manas), the dark energy scalar field pervades all the force-fields and vacuum energy. In that way it binds all manifestations together.

Manas the dark energy scalar field that interacts with other force-fields, gives them 'energy', causes them to be lifted everlastingly. This 'lifting energy' is called 'Ananda'.

These ten force-fields produce their 'putrA' or 'offsprings'. This putrA or offsprings due to the reception of this 'lifting up' energy ('Ananda'). This is explained here (1).

Like a bird that is bound by a rope, flies here and there, not finding any other residence, takes shelter in that binding itself and descends to ground, the manas, the dark energy filled scalar field, flowing in different directions, takes shelter in the prANa, the energy of the force-fields.

prANa, the energy of force-fields  is bound to manas, the dark energy scalar field in this way.

There are several 'knowers of brahman', as they part of the brahman. They are annam, hrday, prANa, manas, cakSu and Zrotram. All of these are parts of the brahman or evolution.

Of these, prANa, the energy in the force-fields is the 'work performer'. It revels (ratih) in Atmanas (dark energy scalar field) as it draws energy from the Atmanas.

prANa, the energy in force-fields draws its energy from Manas, the dark energy scalar field.  There are ten prANas and one Atman /Manas (1).

The 'speed of light' is not just the speed of electromagnetic radiation, but speed of energy propagation in all force-fields. The default nature of energy is to propagate in all the force-fields at a constant speed.

Thus we can see 'Light' or Electormagnetic radiation as a 'prANa', energy propagation in the electromagnetic force-field. Indeed light or sUrya jyoti is the prANa of the earth.

Indeed agni deva ("Knowledge of all that is born") (transfer of energy), they carry the brightness (ketavaH), the sUryam (nucleons) of Universe see/observeAway progresses like nakSatra that goes off by the night, the observation/sight of the Suras/Quarks. The suras/quarks become invisible.

The invisible (Quark's) brightness, the string/cord/rein of the born particles, they burn as in the agni. The quarks burn in the energy received and have become invisible becoming part of nucleons.

Surya/nucleons (nucleosynthesis process) produces the jyoti which crosses over swiftly the Universe. Universe is illuminated by that radiance.

The nucleons (sUrya) observe/see the agni, the transfer of energy.  The observation of quarks (sura) fades away like the nakSatra that fade away from the night.. The quarks/sura become invisible. They become the 'String' of all the born particles. They get burnt-up as if in agni.

The surya/nucleons produces the 'flames'/jyoti in nucleosynthesis process that crosses swiftly the universe, illuminating the universe with its radiance. Universe is filled with Surya/nucleons they come to dominate the Universe (not the sura/quarks which become invisible).

sAyana translates sUrya as 'Our Sun', which is not surprising.  He understands Rg veda 1.50.4 sloka as "Surya produces the jyoti which crosses over swiftly the Universe. Universe is illuminated by Sun's radiance".

Hey surya, you leader of others in earth, possible/capable of greatly enveloping it and as you go, it is to be remembered 2202 yojanas by one/by itself, by half nimiSa progress, salutations be to you".

Surya is the leader of others in the dharaNi, the earth. It is capable of greatly enveloping the earth. It progresses 2202 yojanas in half nimesha.

Since the Rg veda sloka talks about 'Surya' jyoti switfly crossing the Universe, sAyana remembers the speed at which sun envelopes the earth by crossing 2202 yojanas in 0.5 nimisha.

Irrespective of what its value is, this shows that there was a 'specific' value assigned for light to reach the earth.

This 'jyoti' is the 'prANa', the energy propagated in the electromagnetic field. This speed of prANa is constant.

From arthasAstra alone Yojana is 16.4 kms, nimisha is 120 milliseconds.

From artha sAstra alone, the values of Yojana and nimisha seem to match the modern value of speed of light.

Why I call it curve-fitting..?

Though my entire definition of Yojana and nimiSha is from artha sAstra and straight forward, I termed it as curve-fitting. The reason is 1 pAda, I assumed as 30 cms. Now this is my mapping, based on how we use pAda now (as 30 cms).

Artha sAstra defines angula as equal to the breadth of middle-finger of an average man or 8 yavas, where 1 yava is size of a barley. These are difficult to translate into current metric measurements. The only nearest measurement I could get is pAda which is used till now as 1 foot or 30cms. This could be wrong.

Points to be noted

sAyana uses the phrase 'smaryata yojanAnAm", which means it is to be remembered/recollected.. So somehow in some text sAyana got the information that surya jyoti travels 2202 yojanas in ardha nimisa. He recollects it when talking about the Rg veda sloka which talks about surya jyoti swiftly spreading in the Universe.

Thus sAyana does not define the yojana or nimisha or the numbers 2202 and 0.5 nimisha. He is merely recollecting that number.

The light is also a prANa, the propagation of energy in force-fields/rudra, in this case the electromagnetic field. But energy propagates in all force-fields/rudras in the same velocity, which is the velocity of light, unless it is impeded by a Higgs field.

Upto this, whatever I have defined is strictly within the standard Model. So how the Higgs field interaction accelerated the expansion of Universe..? This answer is from quintessence model. Let's see in the next blog..