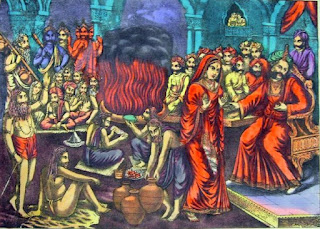 During the cosmic inflation epoch, the dark energy scalar field expanded greatly (Why and How it happened in another blog), creating 'space' with vacuum inside it. Visualize it as the dark energy expanding suddenly on all sides leaving out an empty space in-between.

More precisely, visualize it as the surface of dark energy moving away on all sides leaving out an empty space in between, creating vacuum.

While the 'womb' of space with force-fields/rudras with bed of vacuum energy surrounded by expanding dark energy is called Hiranyagarbha, the space/vacuum that keeps expanding due to expansion of dark enregy scalar field is called 'Brahma'.

According to Standard Model, there were three force-fields that existed during cosmic inflation epoch. They were Electro-weak force-field, Strong force-field and Spinor field (of Quarks, Electrons, Nuetrinos).

These force-fields or rudras manifest in the space/vacuum on top of Stri, the vacuum energy as the 'rupA' of Stri. This is at times visualized as rudras originating from Brahma, the expanding space.

The Story of dakSa and dakSa Yajna occurs in this time.

Since Shiva, the wandering dark energy is all alone and it wanders alone. Hence Shiva is also depicted as 'mendicant' or a 'beggar' 'wanderer'.

During the cosmic inflation epoch, the dark energy scalar field expanded greatly (Why and How it happened in another blog), creating 'space' with vacuum.  This space is manifested with different force-fields or Rudras.

In this space filled with Rudras and underlying vacuum energy, the Universe  evolves as a baby evolves in a womb.  Hence this space with vacuum energy and force-fields inside the dark energy is the 'golden womb' or Hiranyagarbha in which Universal particles evolve.

This inflation potential is the 'dakSa'. 'dakSa' indicates the 'potential' and hence is translated as 'able' or 'ability'.

Thus dakSa is visualized as the 'father' of several daughters (energies) who are given in marriage to different Rishis (symmetry breaking events of different epochs), dharma (law of conservation of energies), Chandra (strong field interactions), Shiva (Quark/matter field interactions) etc..

Hence Sati is called dAksAyani (which means one which resides in dakSa).

When the energy in force-fields, the prANA,  propagates in speed of light, it is called 'Radiation'.

These particles of spinor field are un-impeded by Higgs field, as Higgs did not start interacting with other particles at this point of time in the Universe.

Hence these particles of spinor field were propagating in the maximum speeds of light. Hence Universe is said to be filled with radiation at this point of time.

This can be visualized like 'the energy of dark energy scalar field' moves into these fields of spinor field or radiation (movig at speed of light) and there is little energy left to expand the scalar field.

As more and more energy flowed into spinor fields, the particles of matter get more and more
excited and heated up. The particles acquire higher and higher temperature. This process is called 're-heating'.

The huge inflation potential (dakSa) caused by cosmic inflation does not give back (havis) much of energy to dark energy scalar field. Hence it expansion comes down, while matter particles get heated up.

This re-heating is the dakSa Yajna. Hence it is said that in dakSa Yajna, dakSa refused to give 'havis' to Shiva, the dark energy.


The immolation of Sati

When the re-heating or dakSa Yajna occurs, the particles of spinor field gets heated up and get burnt up. As they get heated up and burnt up, the whole matter particles become a 'Quark-Gluon Plasma'.

The Quark-Gluon-Plasma is a state of matter where Quarks are 'immolated' or can't exist as Quarks or Quark combinations. The Quarks are consumed into a Color charged plasma of Quarks in strong force, due to the high temperatures.

This subsuming of Quarks/particles of spinor field into Quark Gluon Plasma during re-heating is the immolation of Sati in the dakSa Yajna.


Veerabhadra and beheading of dakSa

Due to manifestation of Vira-bha-dra, the dakSa, the potential is destroyed.  There remains an unborn potential in the inflation potential, which causes the dark energy scalar field to expand, but very slowly.

'aja' means 'unborn'. 'aja' also indicates 'goat'. The remaining or left-over unborn potential of the inflation potential is indicated as dakSa with a 'goat' head.

Thus Universe expands, but very slowly at the end of cosmic inflation epoch, as dakSa, the inflation potential is beheaded by manifestation of Virabhadra, the radiation of particles of spinor field.

Sati is immolated as the particles of spinor field become Quark-Gluon-Plasma due to high temperatures of reheating (dakSa Yajna).

The particles of Universe are stuck at Quark Gluon Plasma state, causing the Universe not to evolve further.

How did the Universe evolve further..? What was the role of Vishnu (Higgs) and his Sudarshan Chakra (Weak force field) in bringing back the Universe's matter evolution..?

More in the next posts..