The 51 letters of saMskrt and Universe - Shakti pItha 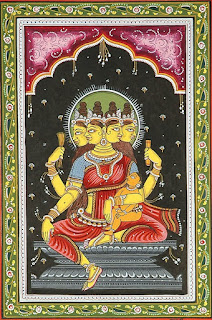 During the Cosmic inflation epoch, the dark energy scalar field expanded,  creating 'space' with vacuum inside it. Visualize it as the dark energy expanding suddenly on all sides leaving out an empty space in-between.

All energy flows into the force-fields, they get heated up and the particles become Quark Gluon Plasma. This is the dakSa Yajna and burning of Sati (matter particles) in the dakSa Yajna.  This is called Re-heating

Now the Universal matter has turned into a Quark Gluon Plasma from which it cannot evolve. Puranas say shiva wandered with Sati's dead body (QGP) till Vishnu (Higgs field) appeared and cut the body into 51 pieces, which become the 51 Shakti peetas.

Let me describe how Vishnu (Higgs field) appeared and used his Sudarshan Chakra to cut the body of Sati (QGP) in the coming posts. Now let's focus on this 51 shakti pItas.

A pIta is a pedestal or a 'base'. There are 51 bases or 'letters' that appear from the Quark Gluon Plasma on which the Universal evolution proceeds. These are the 51 shakti pIta.

The language of the Universe and language saMskrt, both are based on these 51 shakti pItas. Hence saMskrt is referred as 'deva bhAsa'.

What are those 51 letters of Universe..?

The language SaMskRt is modeled based on the 51 Universal letters/syllables that occurs post the breaking of Sati's body into 51 pieces. The 51 syllables are the 51 'letters' of Universe as in the Standard Model.

Vowels add  volume (5)  (to speech because they are generally produced by opening of vocal chords. Try saying a word without its vowel. However you shout, it won't have enough volume as added by a 'vowel'.  The volume added by the vowels are the 'life' to the word.   Without vowels the word becomes lifeless, though the word can be pronounced and it gives the same meaning.

In matter particles, the one that adds ‘volume’, gives ‘life’ to the body are the ‘mass’ couplings. The mass couplings of Quarks,  Electrons, Neutrinos, Weak bosons and Dark Matter are the 16 ‘vowels’ of the Universal expression.

Though there are 6 quarks and 6 anti-quarks there are only 6 different masses in Quarks. Quarks and Anti-quarks of a particular type have the same 'mass'. Hence Quark family has 6 higgs field couplings are six types of masses.

There are electron, muon and tau with 3 different masses. The anti-particles of these positron, anti-muon and anti-tau have the same 'mass' as their particle. Hence electron family has 3 higgs field couplings or 3 types of masses.

There are W+, W- and Z which are massive bosons of Weak force-field. These have three different higgs field couplings and 3 types of masses.

Then there is dark matter which has a higgs field coupling and one type of mass.

These 16 higgs couplings can be classified into 5 hrasva (short), 9 dIrgha (long) and 2 pluta (prolated) couplings.

Quarks of Up, Down, Electron, neutrino and Strange have short higgs couplings and hence lower masses. They are the 5 hrasva of SaMskRt.

Quarks of Charm, Bottom, Muon, Tau, Muon-neutrino, tau-neutrino, Weak bosons of W+, W- and Z have long higgs couplings and hence larger masses. They are the 9 dIrgha of saMskRt.

Top Quark and Dark Matter have the largest coupling with Higgs field and hence very large masses. They are the pluta/prolated  and support vowels of saMskRt (am, aha).

Semi-vowels are called 'antastha' in saMskRt. They stand in the middle of being a vowel and a consonant.

The semi-vowels of Universe are equivalent to the Color and Electric Charges in Universe.

The color charges help build up more massive nucleus of atoms, while electric charges build more massive molecular structures. Like consonants of a word, they make the body of the word and also gives 'volume/life' to it.

There are 3 color charges (Red, Green, Blue) and 2 electric charges (Positive, Negative). These five are the semi-vowels of the Universe.

Consonants are called 'vyaJjanam' in SaMskRt. vyaJjanam are those that manifest. vyaJkanam means manifesting. They are sounds that manifest as the 'body' of a word. They get life from the swaras.

Consonants and Particles of Universe

There are 30 basic particles of Universe that manifest as the Universal particles.

They are
There are 12 Quarks that manifest in the Universe, though there are only 6 type of higgs couplings to Quarks and 2 types of electric charges.

There are 6 electron, positron, muon, anti-muon, anti-tau particles though there are only 3 types of higgs couplings and 2 types of electric charges.

There is only one Nuetrino, though it has 3 higgs field couplings oscillating. Neutrinos are their own anti-particles. Though this is not proved at this point of time, my understanding of scriptures as cosmic science defines without doubt that neutrinos and anti-neutrinos are one and the same.

There are 3 Weak bosons manifesting with 3 different types of higgs field couplings.

There are 8 gluons manifesting due to 3 type of color charges.

These together make 30 particle manifestations (12+6+1+3+8) of Universe or the 'consonants' of the Universe.

Particles of Universe and SaMskRt consonants

The 30 particles of Universe are equivalent to 30 consonants of SaMskRt.

As the consonants mix with Swaras and antastha and make a word,  the 30 particle manifestations of Universe mix with higgs field couplings, color and electric charges and make the matter expressions of Universe.

The 16 vowels or 16 Higgs couplings to particles, 5 semi-vowels or 5 color/electric charges of particles and 30 consonants or 30 particle manifestations  make the 51 shakti pIta or 51 letters of Universe.

All the matter in the Universe are expressions of that Atman based on these 51 letters. Like a human being writes 'information' or 'knowledge' in saMskRt in 51 letters, the Atman has written the entire Universal matter and biological forms with just these 51 letters.

The energy in matter is called 'Shakti'   The foundation of energy in the matter are the 51 letters of Universe, which drive the evolution of Universe in various ways and creates matter locked with lot of energy.  Hence these 51 letters are called shakti pIta or foundation/pedestal of shakti.

saMs-kRt means total creation.  saMs-kRtam is the language of the Universal creation. How..?

Puranas say after Sakti immolates herself in dakSa Yajna, her body is cut into 51 pieces and these 51 pieces become the shakti pIta. Vedantic philosophers also mapped it to 51 letters of saMskrtam.

The 51 letters of saMskrtam is divided into 16 vowels, 5 semivowels and 30 consonants.

Since these 51 came from the body of Sati, (which I said is Quark-Gluon-Plasma), I am saying the 51 letters of Universe are

1. 16 types of Higgs couplings that causes 'mass' in the Universe (6 of quarks, 3 of electrons, 3 of neutrinos, 3 of Weak bosons and 1 Dark Matter)