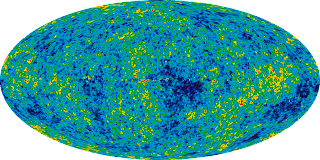 The early Universe with energy and force-fields is the Quantum Universe. This is before determinism or particle nature permanently manifested. This is the Universe of Rudras and prANa (1).

The Universe in which particle nature has acquired permanence is the Classical Universe. This is the Universe of deterministic matter particles.

The Classical Universe evolves from Quantum Universe because of cakSu and Zrotram. cakSu/Observation/Sight brings the Satyata as explained(1).   Zrotram is the 'Hearing' that happens when energy flows in a medium of particles.

Difference between Quantum and Classical Universe

The classical Universe is different from Quantum Universe in


Zrotram - When energy flows in a medium

Directions originate because of zrotram. Directions are endless. Whatever moves in any direction, end is never reached as it is expanding endlessly. So zrotram invokes the endlessness.

How can zrotram, hearing, which is reception of energy through medium of particles cause directions and endlessness of directions..?

Universe also has no 'sense' of direction. It is expanding at the same rate in all directions.

Assuming there is no matter in the Universe, then the Universe looks the same in all directions. It means, the vast Universe has no differentiating 'directions' without the presence of matter. It is same everywhere.

It occured by 'zrotram' or Hearing.

Science says the current structure of Universe is explained by Baryonic Acoustic oscillations(2) or Cosmic sound. Vedas and Upanishads say it is caused by OmkAra or praNava.

The early Universe in the Photon epoch was an Universe of hot, dense, plasma of baryons, electrons and photons.

This hot, dense plasma with dark matter and matter bends the spacetime it occupies and produces gravitational warping that compresses matter. But the energy of the photons, travels/radiates towards  outside on these matter.

Thus zrotram, the hearing of the baryonic acoustic oscillations or praNava, brings in the anisotropies of matter and the concept of 'direction' or 'diSa' to the Universe.

At the same time, the Universe spacetime also expands due to dark energy. Hence these anisotropies (directional properties) also get inflated along with it. The spaces between the aggregated matter which were smaller in the early Universe, become huge as the spacetime expands.

Think of a balloon which originally had some ice-cream drops aggregated on it. When this balloon expands, the drops become much far apart.

Since the spacetime is ever expanding, the directions are ever-expanding and endless.

In short anisotropies (directional properties) happen due to matter getting accumulated by Baryonic acoustic oscillations, the space between the accumulated matter expand endlessly due to spacetime expansion says Standard Model.

In short direction/diSa originates because of Zrotram, whichever direction matter travels, it is endless as the directions are endless says Brhadharanyaka Upanishad.