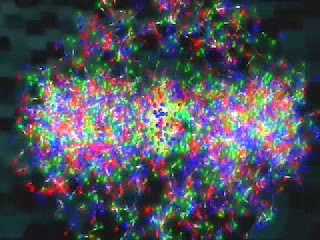 The desire (preyas) for Atman that is deep inside in every being is spoken externally, spills out as love (priyam) of other beings also, and thus this desire/love gets 'banked', binding all the matter/beings of the Universe.

This was the message of Upanishad upto sloka 1.4.8.

But that love, priyam that binds beings, if excessive, may not allow beings to evolve further or have their own self. This is seen in the sloka with mahA vAkya 'Aham Brahma asmi'.

Atma tore apart the Purusha. Stri filled the empty space/vacuum. Yajnavalkya says tearing apart was like a pea torn apart, which means it is so swift. In cosmic science parlance, it is the Cosmic inflation that expanded the space and filled it with background oscillations of vacuum.

The 'Svah' (the heavens) which was just AkAsa (empty space or vacuum) got  filled with Stri. (Stri are the background quantum oscillations of vacuum).

Stri are the oscillations that becomes the blood of all manifestations. Stri was 'alomaka' (hairless) at the start. It was hairless in the sense, oscillations of energy was homogenuous all through the space.

From mouth of the Yoni of Stri, Agni, usable/transferable energy comes out. Agni leads to Soma. (Now Agni develops 'Hair' (loma) or different regions of space become different with different manifestations). Soma and Agni lead to best of Devas.


All creations are from Stri and through Stri.   On Stri, all manifestation occurs in pairs. From these manifestations, the manuSya take birth.

Manifestations of Universe have different forms/shapes/functions (rupA) with identifiable 'names' (nAma). Like a Sword shut in a case, Agni is shut inside the names (nAma) and forms (rupA) that thrive on it. Agni is called Visvambhara, the universal sustainer, as it is the usable/transferable energy that sustains all the manifestations.

What is that uniquely identifiable 'rupA' that can have a nAmA..?  Each 'rupa' or 'form/shape' has some 'karma' or 'function' associated with it. A 'rupa' is one that performs a particular 'karma'. That 'rupa' gets a particular 'nAmA'. (That's how primitive particles, composite particles, atoms, matter forms and biological beings evolve)

While a karma performing rupA gets a nAma, that rupA does not have information to function independently, like all our body organs have a function, but cannot work independently

Atma makes all the rupA (forms) with nAma (names) to function together and hence makes them complete. (Thus Atma virtually manifests in all the rupA that perform a karma)

Every rupA excessively desires the Atma than sons, wealth and all others, as Atma only makes them complete. This Atma is deep inside (and hence not perceivable).


The desire for Atman that is deep inside in every being is spoken externally, spills out as love of other beings also, and thus this desire/love gets 'banked', binding all the matter/beings of the Universe.

But that love, priyam that binds beings, if excessive, may not allow beings to evolve further or have their own self. That's seen in the next two slokas.

Brahma or (brahma va) this (idam) seated at first/before (agra asit) that (tad) beings (Atmanam) alone (eva) knows (avet) myself (aham) brahman in me (brahma asmi) thus (iti) From that/therefore (tasmAt) that (tat) everything (sarvam) took birth/gets created (abhavat), that (tad) which which (yah yah) energies (devanam) at its command/to be at hand (pratyabhubyata) together with they manifest (sa tad abhavat), same way manusya (tatha manusyanam).

The matter forms (Atmanam) manifest with whatever energies (yah yah devanam) at their command/at hand together with these energies.

The same happens for Rsi and manuSya manifestation. They manifest with whatever energies at their command together with these energies.

On seeing matter forms (Atmanam) manifesting with whatever energy at their command, Rsi vAmadeva offers 'aham'/the self, makes visible the Surya and Manu.

This left-handed dominance leads to formation of baryons or what is called hadronization. In this quarks with very light mass form heavy baryons due to the energy at their command, which is called the QCD binding energy.

The evolutionary 'self' (aham) is offered to matter by Rsi vAmadeva (Chiral symmetry breaking) and particles manifest with whatever energies at their command together with those energies.

That (tad) this (idam) at the end (apaya) then (tarhi) which knowledge /which knows/realizes (ya evam veda) i am myself brahma (aham brahma asmi) iti, with this (sa idam) they become (bhavati) everything (sarvam). Unto them (tasya) certainly not (ha na) energies (devas) not the matter (abhutya) control/govern (iSate), All those (esam) become/manifest (bhavati) with Atma (sa atma).

Only those that know brahman in the 'Self', they become/create everything. Neither the energies (with which they manifest) nor other non-physical/non-matter forms control or govern them. They all manifest/become with Atman.


This evolutionary self (aham with brahman) was offered by Rsi vAmadeva and those with this aham manifest and create further (or evolve). These are the baryons that evolve the Universe further.

Then those other devas, dependent on other devatas, like the pazur, not with the knowledge of the differentiated 'self' (He other, me other), not with this knowledge (of brahman, the evolution).

Then there are also those particles/devas that do not have this evolutionary knowledge of the Self, but become like pazu, domesticated cattle, dependent on Purusha for sustenance.

If one cattle manifests love/desire in us(to hold it), what about multiple..? Likewise Purusha holds a lot of these devas/energies that do not have a differentiating self, that do not have the Brahman in the Self, with a lot of 'priyam', as manuSya holds their multiple pazu.

Therefore manuSya needs to unlearn this love (of pazu) in us. What is tied with 'Priyam', with 'love' or or with 'desire', does not evolve, does not have its own self and does not have the evolutionary Brahman in it.

So what is the Brahma-Vidya or Evolutionary learning that every matter has to have to evolve further..?

Every matter form (AtmAnam) has to 'know' that Brahman (evolution) is in its 'Aham' or 'Self'. Only those matter forms that have this 'knowledge' manifest with whatever energies they have at hand. So every matter form has to have a 'differentiating' self.

This is illustrated by Rsi vAmadeva.

The Universe was a 'completely bounded' Quark Gluon Plasma at one point of time. It had no particles that had their own differentiating 'Self'. Hence there was no Brahman or evolution in them.

The Chiral symmetry breaking event 'vAma-deva' leads to formation of hadrons. Some of the hadrons like Protons and Neutrons form the nucleus and hence they are called nucleons. Surya are Nucleons (1).

Thus the Chiral symmetry breaking event, Rsi vAmadeva, creates particles with 'distinct' self from a bounded set of quarks.  This distinct 'self' has the 'brahman' or evolution in it.

The evolutionary 'self' (aham) is thus offered to matter by Rsi vAmadeva (Chiral symmetry breaking) and particles manifest with whatever energies at their command together with those energies.

Such particles acquire distinct identity (aham anya, asau anya) and a differentiating self. Only such particles become/create everything further. Neither the energies with which they manifest nor other non-physical/non-matter forms control or govern them. They all manifest/become with Atman.

Then there are those other particles/energies, dependent on other devatas, like Pazu (domesticated cattle). They are not with the knowledge of the differentiated 'self' (He other, me other). Hence they do not have this knowledge of brahman, the evolution.

These matter forms do not have a differentiating 'self' and hence become like 'pazu/domesticated cattle' for the Purusha. The particles/energies are tied to Purusha and hence do not evolve further.

Just as a manuSya enjoys multiple pazu (multiple pazu serve a manuSya), each and every Purusha enjoys these (multiple) devas/energies that are tied to it. Hence these forms are tied to Purusha like the pazu and do not evolve further.

If one cattle manifests love/desire in manuSya to hold it, what about multiple..? That love is excessive.

Therefore manuSya needs to unlearn this love in us. What is tied totally with 'Priyam', with 'love' or or with 'desire', does not evolve, does not have its own self and does not have the evolutionary Brahman in it.

When a manuSya is bounded too much to the extent manuSya loses the self, then the evolutionary zeal, the brahman in the manuSya is also lost.


The right kind of priyaM

All the matter forms are physical manifestation of Atman. Every matter form desires that 'Atman'. This desire for Atman spills out as 'Priyam' or 'love' of the self and other beings. This love is the 'Izvara'. This Izvara, the bonding between different matter forms controls or governs the Universal evolution.

Izvara is priyaM. But the priyaM to extent of making oneself a domesticate cattle, a pazu, makes one lose the differentiating self and hence the brahman or evolution.  In such a mater form without self, brahman does not manifest and that form does not evolve/create further. So manuSya should unlearn this kind of priyaM.