An analysis of Sabda and vAk - Part 10 - The finale 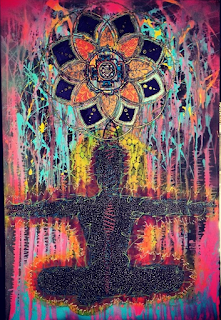 Starting from Brhthari's vAkyapadiya, Sabda and vAk have the same meaning as in other texts like Rg Veda, Brhadharanyaka Upanishad, Mandukya Upanishad and saMkhya kArika, irrespective of their timelines, geographies and philosophies that were 'dug'out of them.

The seven parts and nineteen faces of Mandukya Upanishad are not specific to a particular state  though they are talked about in the antaH-prajna and bAhis prajnA alone. It is because these two are are the external part of expressions of Atman or Human being.

These nineteen faces of Mandukya Upanishad including the five tanmAtras are the 24 principles that saMkhya philosophy is all about.

Aham-kAra is that makes the 'Aham' the 'Self'. It is the one that 'differentiates' or 'diverges' or 'divides' between matter forms and gives them the identity.

From the state of ekibhuta prajna, the prakrti, the energy of background quantum oscillations in vacuum, various force-feilds or Rudras manifest or get divided and diverged. From a Unified Electro-weak-Strong force, strong force separates, then electromagnetic and weak force separates.  From a Unified Higgs field that does not interact with matter, higgs field that interact with matter manifest.

All these are 'Aham-kAra' or creating individual identities.

Thus Aham-kAra, that differentiates and gives different identities arises from prakrti (background quantum oscillations) but exists at all times in the Universe.

In Classical thermodynamics it could be the 'internal' energy of an object/matter form or zero-point energy of a particle manifestation, that differentiates objects and gives them specific identities.

In Quantum world, it is the Rudras the force-fields that continuously divide from being a single unified force into multiple manifestations of force-fields.


The antaH-prajna the 'dreamy state', has seven parts, nineteen faces, enjoyed alone (internally), the taijasa is the second quarter.

In Universe's expression, the second part is like a dreamy state, in the sense, it is a probabilistic state of existence unlike the 'sthula' which is deterministic.

Both Classical and Quantum state are matter forms. Classical is deterministic/gross/sthula and Quantum is probabilistic/subtle/taijasa.

The seven parts and 19 faces are characteristic of matter forms irrespective of being probabilistic or deterministic.

Where in 'supta' neither 'kAma' nor 'svapna' exist, where the 'Supta' establishes one bhuta (just consciousness remains or deep sleep), that is Ananda and enjoys Ananda, that is the third quarter.

In Universe's expression this is the 'Virtual' particles manifestation that exist within every particle manifestation of Universe from baryons, mesons, nucleus virtually, that joins them, that creates everything and hence knows everything in the Universe. It is the 'Manas'.

Om is the akSara of everything, unto it, is explanation for matter present, future etc (and past). All the matter past present and future are made by Om and hence the Universe is om-kAra, made by OM. OmkAra means 'made by Om'. This is beyond time, time as we see in tri-kAla (past, present, future).

All of these (Universe) are brahman (evolution). This Atma is brahman/evolution. This evolving/brahman, expression of Atma is of four parts.

The first part is Vaisva-nara.  It  means the Universal matter. Nara is the mortal matter. Visva is universe. Vaisva-Nara are those Universal mortal matter forms. It is like 'waking up' state of consciousness. Hence it is called 'bAhis prajna'.

Vaisvanara is the 'Classical' matter that we observe. They are the 'sthula' or 'gross' or more precisely 'deterministic' matter form.

The second part is Taijasa. Taijasa is like a dreamy state, in the sense, it is a probabilistic state of existence unlike the 'sthula' which is deterministic. It is called 'antaH-prajna' or the prajna inside.

Both Classical (Waking up) and Quantum state (dreamy) are matter forms. Classical is deterministic/gross/sthula and Quantum is probabilistic/subtle/taijasa.

The fourth part is not just the source of everything. It is what exists inside of everything, joins them and makes them to function homogeneously. Since it is 'inside' and controls, it is called 'Easwara' of everything.

The design pattern of vAk