Learning physics through Vedas and Puranas - 1 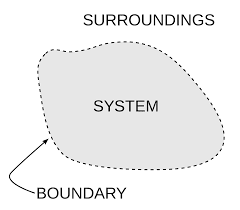 Energy and Entropy are two key thermodynamic concepts. Let me explain them and the second law of thermodynamics with reference to Shiva/Ganapati/Skanda and their 'jnAna-pazham' story here.

I already wrote about it, but covered a broad spectrum of it. Here the focus is narrow and the attempt is any 'interested' layman should be able to understand it.

All things in our Universe lie in Energy. Universe is made of energy that came out in Big-Bang says science. Energy is the Cause of all things in the Universe.

In Sanskrit, Shi-va means ‘in which all things lie’(1). Shiva is a ‘Divinity’ or ‘God’ in Hinduism. Shiva is the Energy. Shiva is interpreted as energetic, auspicious, beneficial etc as Shiva is the cause of all Universe.

This Shiva, the energy, Causes two effects, in the Classical world that we see, in the world of matter.

The Effects of Energy are ‘Work Energy’ and ‘Heat Energy’. Hence Shiva is said to have two Sons. Work and Heat, famously called Ganapati and Skanda.

Work is physical movement. It is movement in a region of space from one fixed point to another fixed point. In that sense it is an 'ordered' movement.

This physical movement is caused by either by physical contact or a long range force-field.

God of ‘Work’ in Hinduism is said to be Ganapati, a son of Shiva. Ganapati is worshipped before any work is started because Ganapati is God of Work.

Work is 'Ordered' movement of molecules/atoms, from a definite starting point to ending point. In Sanskrit 'Gana' means 'Ordered set' or 'troops' (which are ordered formations) (1). Hence Work is called Ganapati, the Lord of ordered sets/troops.

Heat is vibrations or oscillations of matter.

Atoms and molecules or say protons and electrons that make them,  exhibit a movement of hopping up and down continuously, which is a vibratory or oscillatory motion. This motion is what we perceive as ‘Heat’.

In Sanskrit, Skanda means "anything which jumps or hops up and down" (1). This Skanda is said to be another son of Shiva, the energy.

Skanda is also said to be son of Agni or fire, because Heat is produced from Agni, the fire.

Thus Shiva, the energy has two sons. Ganapati, the Work and Skanda, the Heat.

Ganapati, the work, is ‘macroscopic’ movement, physical movement of molecules across a region of space.  Skanda, the ‘Heat’ is ‘microscopic’ movement, vibratory/oscillatory/up-down movement of atoms and molecules in the same place.   Since Ganapati the work is Macroscopic and Skanda the Heat is microscopic, Ganapathi is said to be the elder brother.

Ganpathi, the work, is ordered movement, from one place to another place. Skanda, the Heat is Random Movement. Hopping up and down is a totally random movement with no order or organized movement.

Both Work and Heat cause Entropy in all matter forms.

Let’s take a coin. This coin is a fair coin with head and tail on either side. The coin is idle, lying on the table, with 'head' upside.  In that case, only 'head' is seen always.

The coin is in the state of ‘head’ always. We can say that the coin has ‘zero information’ in it. Because there is only head and no other reference to compare. It is much like a ‘bit’, a binary digit, being always 1 or always zero.

A ‘bit’ which is always zero or 1 has no information. But if it is changing continuously then it has some information.

So the coin has 1 state and zero entropy or information content.

We can give energy to this coin in two ways.

One is simply flipping it in the same place. It is like the microscopic oscillatory movement, the heat. The coin exhibits a rotational movement but does not move in region of space. Another is tossing it up, which is like macroscopic movement, the Work,  moving across a region of space. Yet another possibility is to do both at the same time (flip and toss).

Once the coin acquires some movement in either way, the head and tail of coin becomes visible. If head is bit 1 and tail is bit 0, then the information content of the coin is a series of 1's and 0s.

The microscopic and macroscopic movements exhibited by atoms and molecules of matter causes them to exist in series of multiple energy states, similar to heads and tails of the coins.

Thus the energy of matter can also be described in terms of distribution of these multiple energy states of atoms and molecules.

This internal energy is represented by Entropy, distribution of energy states, which is the information content of the matter forms.

These two representations, the Energy and Entropy of a matter are equivalent.

Like an analog signal can be quantized and processed digitally, the internal energy of a matter form can also be represented as distribution of energy states and processed as information using statistics.

Like the amount of information generated from analog signal depends on the level of quantization, the entropy of a matter form with fixed energy can vary based on how particles in it are distributed and bound.


jnAna - Utilisation of energy or information

Now the question is, Can we make use of all this internal energy of matter, completely, say to 100%.?

Another way to frame the same question is, Can we make use of all the information content created by the energy, say to 100%?

That brings to concept called 'jnAna'. jnAna is traditionally translated as Wisdom.

Veda is knowledge or information.  jnAna is utilization of that information or knowledge.

This is the question of second law of thermodynamics.

The Second Law of Thermodynamics puts a limit to the extent to which Heat of matter can be made use of.  It says the 'Heat' energy of matter forms cannot be 100% utilized. But there is no such limit on the energy caused by 'Work' on the matter forms.


Why did Ganapti get jnAna..?

By strengthening the bonds, Ganapati, the Work gets jnAna, which is 100% utilization of energy.


Why not Skanda get jnAna..?

When asked to go around the world, Skanda is said to have mounted his peacock and left.  Peacocks actually do a series of hopping up and downs, as they can't be airborne for long.

From energy perspective,  when random hopping up and down motion is converted to useful work by physical collision with atoms, it spreads across the place or is all over the place (go around the world). Hence a part of the energy is always lost.

Like all matter forms have energy caused by work done on them and heat imparted on them, all biological beings have 'brain' and 'heart'.   Ganapati is the brain and Skanda is the Heart.  Any external work done on us goes into our brain, becomes its information which can be fully utilized.  Any external 'heat' imparted on us 'goes' into our 'heart', becomes its information (passion) and it cannot be fully utilized. But more on these later..