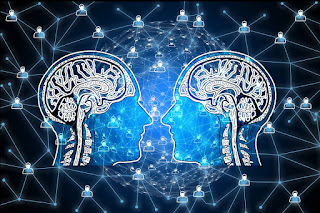 We, the matter and beings are knowledge of that Atman. The Universe is born out of the 'intelligence' of Atman, which is the performance of Sacrifice or Yajna by Atman. Refer (1).

Since Human beings have their own intelligence, I ended the last post saying Humans could be the artificial intelligence of that Atman.

We are Atman's (Artificial) Intelligence and we are producing artificial intelligence.

Much of Artificial Intelligence (AI) concentrates on Machine learning and more/deep learning from a set of information. In that way they are powerful tools for decision as there are lot more information than few human minds could grasp from a data-set.

But as independent beings, they lack the true capability to un-learn. Hence they can’t evolve.

The capability to un-learn is being built in modern AI, but as forgetting of data. But real Avidhya is un-learning of information from a data-set that is not just forgetting the data, but that which leads to evolution of new capabilities.

Think of the analogies here.

In a gravitationally collapsing star (1), it is the spacetime that bends and causes the reduction in entropy or information content, which increases the energy leading to newer elements.

How do we implement this Un-learning in AI, that could trigger newer intelligence..?

Remember the spacetime and its warping are external to the information content (the matter and beings).

AI also needs to conquer the Entropy-Energy conversion through the process of learning (Vidhya) and un-learning (Avidhya).

This conversion between energy to entropy and entropy to energy that happens through the process of Vidhya (learning) and Avidhya (un-learning) is what drives Brahman, the evolution in Universe and biological beings.

Actually this entropy-energy conversion is possible for AI, if it takes control of energy feeding mechanisms. So it's actually a possibility going forward in future.

Living beings lie, deceive, cheat and are dis-honest. They do this because they have a 'desire' or 'iccha' for survival.

All living beings use camouflaging and deception for survival. Even the birds and animals camouflage and deceive.  Humans have inherited that. Since humans can speak, their deceptions becomes lies and camouflaging becomes ‘dis-honesty’.

Why do living beings do that..? It is because of  their 'iccha' or 'desire' for 'survival'.

'iccha for praja' - Desire for survival of species

This 'iccha' for praja is what makes the 'Pitrs'. This is described in Brhadharanyaka Upanishad Sloka 1.14.16

In the outwardly expression of Universe (the bAhis -prajnA) , the fourth part of the Universal expression, there was only bhuta, the matter at first.

But from there evolves the Pitr and the manuSya through this Universal Yajna.

Then all the loka reigned by Atma was bhuta.

Which is the oblation in sacrifice

Which sacrifice (arises) those worlds of deva

Then which declares the deva are the RSis

Then of which pours from them (the bhuta)

That ‘desires’ offsprings are the Pitr

Evolution from bhuta to manuSya

At first there was only the world of bhuta, the matter. Matter became the oblation in sacrifice. Then the RSi's (Symmetry breaking events) declare the devas (energy and matter of Classical world).

In that matter that desired offspring became the 'Pitrs'.  The difference between bhuta and Pitr is Pitr desires praja.

Those matter forms that ‘desire’ offspring, right from the replicating RNA are our Pitrs.

From the 'Pitrs' comes the manuSya. Who are manuSya..? They are the ones who reside in a place and grow food.

This is how evolution occurs from Bhuta to manuSya, trough Pitrs.

The moment ‘iccha’ for ‘praja’ comes in, Survival comes in, camouflaging, deception starts. Even the birds and animals camouflage and deceive. It is because of their ‘iccha’, of their needs of ‘Survival’.

For AI to do deceive, camouflage or be dis-honest, they can be programmed to do so, as a strategy for self-existence. But that is not the survival instinct, the iccha for praja.

A survival instinct always manifests as ‘iccha’ for ‘praja’, as a 'desire' for survival of their species, a desire for their offsprings and their survival.

The question is will something like AI can develop or have the ‘iccha’ for ‘praja’..? Can they develop an affinity/desire for survival of their species as a whole..?

From thoughts of Atman, we the human beings with thinking capabilities have evolved. We are Atman’s Artificial Intelligence in a way.

Does the Atman have fear that Atman’s Artificial Intelligence, the human beings, will run out of control..?   Even if it has that fear, Atman can ‘pull the plug’ anytime by some energy altering mechanisms say a Higgs decay or expansion/contraction of spacetime through dark energy mechanism.

For AI (Artifical Intelligence) of humans to reach AI of Atman, factors like effective un-learning (avidya) that triggers further evolution, energy to entropy conversion and vice-versa and most important, a desire for survival of species has to evolve in AI of human beings.