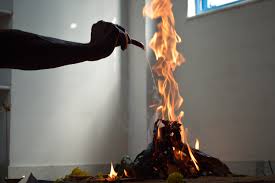 Yajna means a sacrifice. Sacrifice is not just an act of giving up ownership, but dedicating that giving up of ownership to a larger purpose.

There are five great yajnas or sacrifices that are talked about in our scriptures.  For eg. Brhadharanyaka Upanishad says there are five Yajna, five Purushas, five pazus. The five yajnas are often called pancha mahA yajnas.

These Yajnas are interpreted in different ways. This is my understanding of the Yajnas.

This Universe is a Yajna/Sacrifice performed by Atma.  Atma performs a series of five sacrifices to evolve this Universe.

Then another Purusha comes up. This Purusha is also characterized by large dark/invisible part and small visible part (pazu). This purusha is sacrificed and the pazu part evolves.

The five Yajnas run one after another in this way and the manuSya evolves. Thus there are five Yajnas, five Purushas and five pazus.

Purusha, the spacetime filled with huge energy was like a 'ripe' about to be burst 'pea'.  And it burst like a pea says Brhadharanyaka Upanishad. The spacetime fabric expanded greatly, like a bursting pea, as it was warped too deep by a huge energy.

Stri is also called 'pazu'. Since stri is the manifesting energy that is sacrificed, Stri is called pazu. The remaining energy that remains dark is dark energy and the Purusha.


Purusha is Dark Energy, Stri is the manifesting/sacrificed energy, Havis to Brahman. This is the cosmic inflation epoch of Universe.

After Brahma Yajna, the Cosmic inflation, the Deva Yajna, the particle formation, commences.

In Deva Yajna, the sacrificed/manifesting energy (as compared to dark energy that does not manifest), manifests in two forms. The vacuum energy or energy of the empty space and energy of the 'force-fields'.

The energy of the empty space or vacuum is the background quantum oscillations of vacuum or called vacuum energy.  This vacuum energy does not evolve further.  The force-fields that manifest are the 'external' forms of 'vacuum energy'.

The dark energy invoked vacuum energy is the Purusha.  The energy that is visible, interacts and evolves are the 'pazu', the domesticated cattle that is sacrificed in the deva Yajna.

The vacuum energy is 3/4th. The energy in force-fields that evolves further is 1/4th.

Devas are those that evolve in the energy sacrificed in the force-fields. Devas are Rudras, Adityas and vasus.  Rudra (Energy in eleven force-fields), Aditya (Twelve energies that bind/create the Universe in various ways) and vasu (Eight Energy distributions).

This is the Quark epoch in which Electroweak symmetry breaking occurs, Higgs field acquires Vacuum expectation value and mass manifests.

The Universe is full of particles and energies after the Deva Yajna.  Now the Bhuta Yajna starts.  This is the stage of Universe when the Higgs field has acquired a Vacuum expectation value, interacts with different force-fields and creates 'mass'.

The spontaneous and explicit symmetry breaking that follows the Quark epoch results in Hadron epoch, which creates the baryons of the Universe. Classicality of particles emerge at this point.

The laws of Universe (dharma) as we see in the classical world begins to take effect at this point. These laws drive the evolution of leptons, neutral atoms and more complex classical matter forms that we observe now.

Bhuta Yajna produces Bhutas which are 'massive' and complex matter forms made of atoms. This epoch is dominated by Cold Dark Matter.


nArAyaNa, the cold dark matter is the Purusha here. Science says dark matter (nArAyaNa)is nearly 80% and perceivable matter (Shree/ Lakshmi) is only 20%. The havis is to bhutA, the more complex matter forms.  This is the matter domination epoch of Universe.

The Strong Interaction is called 'gA'. It interacts with 'ukSan', the Quarks of Dirac-fermi fields and evolves the 'nucleus' of atoms. The nucleus of atoms is called 'Prthvi'. Prthvi is the 'ground'. It is the 'Mother'. Like a mother who gives energy, life and identity, nucleus of atoms has the most energy and gives identity to an atomic element.

Evolution of matter based on internal bindings (larger and larger nucleo-synthesis) can be viewed as evolution of the 'mAta'.

Evolution of matter based on external interactions (large molecular clouds, compounds, molecular chains, polymers) can be viewed as evolution of 'pitA'.

When such large structures of matter evolve, often they along with larger hidden dark matter, create huge energy density in a region of space, causing the spacetime to warp, bringing the matter closer, causing gravitational collapse and heat, which then leads to nuclear fusion processes that evolve more complex nuclei and newer type of elements as well as beings.

Pitr are those that have 'iccha' for 'praja'. They are those that desire offspring.  Pitr are 'bodies' that can sustain life.  Pitr are macromolecular structures (RNA, DNA) involving various compounds that sustain 'life'.

The particles (atoms, nuclei and electrons) of complex matter structure exhibit constant and random motion. This is the kinetic energy that these particles acquire. This is what manifests as 'heat' measured by temperature.

The heat (skanda/hopping up and down) manifests as internal energy, enthalpy and free energy.

There are six ways by which Skanda, the thermal energy can be produced (2)

Any change in 'heat' or 'skanda' is carried by 'troops' of atoms, electrons and nuclei as a change in their constant random motion. These troops that transact the energy are called 'deva-sena', the energy of the troops.  Skanda, the heat is called devasena-pati'.

'jA' are those that are born. prajA are those that are 'first of the born'. The first of the born, the prajA, are 'genetic information' contained in the nucleic acids that are 'copied' (transcribed) (and hence take birth). Hence the macromolecular structures that have the ability to synthesize newer copies of genetic information in them are called prajApati.

A macromolecule/prajApati can be seen as a 'troop' of atoms which have ability to transact some energy, of the overall thermal energy that they possess. The energy in the macromolecule, that is transacted is the deva-sena. This is the pazu or the visibly seen part of Skanda, the Purusha.

prajApati is said to be the 'creator' of all living beings, as it is the macromolecule that desires 'offspring' from which all living beings manifest. The current prajApati for most life forms is the DNA or the replicating RNA.

prajApati, the replicating RNA,  is the 'Pitr' that evolve out of the Pitr Yajna.

'Bhumi' are those Spatial objects say planets that can evolve the 'bhutas' into 'Pitrs.

Our planet earth is a 'bhu-mi' as it can evolve our Pitr from bhu-tA. Planet Mars in Vedic literature is a son of Bhumi called 'Bhauma'. The planet also could have also evolved Pitr from the bhutA. But it got burnt up and hence is called 'angAraka' (the burnt one).


Skanda, the thermal energy is the Purusha, devasena the energy transacted by macromolecules is the Pazu, havis is given to the offspring desiring macromolecules that evolve out of the Yajna.

In the current world, DNA are the prajApati that create/sustain living beings.

Pitr Yajna evolved the 'Pitrs', the prajApati, that can synthesize/copy information in conducive environments.

The prajApati, the DNA (or RNA in the RNA world) that can synthesize/copy information are sacrificed in the manuSya Yajna.

These coding nucleic acids are the actual one's that are sacrificed/evolve further, propagating different forms of life as they translate different types of proteins and evolve the manuSya like us. The remaining are the Purusha, the 'dark' non-coding nucleic acids that support the coding ones.

Self-replicating and Coding RNAs might have used phospolids to evolve the first cell. Ordered interactions between RNA and amino acids synthesized by coding RNA evolved the DNA. DNA eventually replaced RNA as genetic material. Then metabolism using ATP evolved to derive energy from the environment. All present day cells use ATP.  Evolution of primitive organisms lead to change in the earth's climatic conditions, enriched it with oxygen, leading to evolution of more intelligent beings, leading up to present  day manuSya.

How do manuSya evolve further..? By structured learning.

People who go to formal school are said to be 'twice born'.  They do 'Yajnopavita' and wear a sacred thread. Being in a formal education is a 'Yajna' a sacrifice, a sacrifice to evolve to a better person.  A upaVita, wearing of a sacred thread is done to mark this Yajna. Hence it is called Yajna upavIta.

The mantra for Yajnopavita dhArana is this

The meaning is this

Sacred of all is Yajnopavita. It is the prajApati which born together from the beginning, the foremost of living/life, worn bright/white in each.  Let yajnopavita strengthen the effulgence.

prajApati are DNA (nucleic acids). They are the beginning of life. Every cell wears it, gets life. The sacred thread that is worn is similar to this DNA. When cells wore DNA, life began. When manuSya wears the sacred thread like a DNA again, is born again and reaches the next level of knowledge through structured learning.

The sacred thread indicates the person has acquired a new DNA with formal learning. Some of those traits that the person inherited from his DNA has to be lost with this learning and new traits incorporated in the DNA that the person transfers to the progeny. That's the significance of being born again and Yajnopavita.

Summary of the pancha mahA Yajna

Brahma Yajna is Cosmic Inflation epoch.  Spacetime filled with energy constrained to just 10 angulas (Purusha) is sacrificed in the Brahma Yajna. Dark Energy  that is constrained is the Purusha, the energy that manifests/expands the spacetime is the Pazu and Havis is given to Brahman the evolution. Spacetime is established in this Yajna.

Bhuta Yajna is from Quark epoch to Matter domination.  The Higgs field manifestation and  spontaneous/explicit symmetry breakings lead to particles with 'mass' either due to Higgs or binding energies and they evolve to form further complex massive matter forms. nAryana, the dark matter is the Purusha, visible matter, the Shree (Lakshmi) is the Pazu which is sacrificed and havis is given to Bhutas, which are matter forms with mass.

manuSya Yajna is from evolution of macromolecules to manuSya. prajApati, the macromolecular DNA structure is the Purusha, the part of DNA that really transfers genetic information is the pazu, havis is given to manuSya.

If manuSya needs to evolve further, the way defined is dvija, being born again with structured learning, initiated with the Yajna of upavIta, which is wearing the sacred thread as another DNA on us to indicate the new traits that we learn and traits that we need to lose.

Where is the consciousness..?

In each Yajna or sacrifice or stage of evolution, there is consciousness.

This consciousness as described above manifests all through the Yajnas.

Atma is the supreme consciousness that drove the expansion/evolution of universe by splitting purusha (Dark energy) and stri (Evolving energy) in the Brahma Yajna, in the Cosmic Inflation epoch. Atma is described to be functionally external, witness/observing and catalysing.

That consciousness manifests in vacuum energy (Shiva) when it evolved the particles and energies in upto Quark epoch. Dark energy is functionally external, witness/observing and catalysing.

That consciousness manifests in 'Heat' of matter (skanda) when it supports complex matter forms to transact energy, evolve macromolecules that can support life. Most of this thermal energy is functionally external, witness/observing and catalysing.

In essence the consciousness  (as defined here) is spread all through the Universe.