An analysis of Sabda and vAk - Part 5 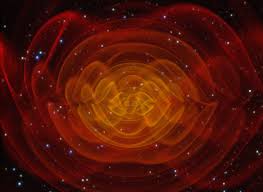 Rg Veda Mandala 1 Hymn 164, Upanishad and vAkyapaidya  talk of four-fold vAk. Rg Veda Mandala1 Hymn 164 says  what is being talked about as Indra, Agni, vAyu are all those in the fourth stage only. The rest three are only known to the learned of the Brahmanas.

The four-fold Universe are

What is known to everyone  which we can talk about is this thermodynamics part of Universe, the classical part of Universe. This is the part of the Universe which is perceived outside. The other three parts is not easy to be known. Only the learned of the Brahmanas know it.

This external expression of Universe, which is the thermodynamics part  is what we see as large empty spaces with galaxies and matter sprinkled all over.

Why do we see the Universe in this way..?

Science says Big Bang created the energy of Universe, which was followed by 'Inflation/Expansion' of spacetime, in which spacetime expanded hugely. This is called 'Cosmic Inflation'.

Purusha suktam says the same thing. Adi Purusha, the first of the pancha purusha, which was constrained to just 10 angulas greatly expanded and that's how Vizvam manifests.

In either case, if a cosmic inflation of spacetime created the Universe, then Universe should have got matter spread uniformly all through spacetime.

Think of a balloon that expands when air is pushed inside. Whatever exists on the surface of balloon uniformly expands along with surface of the balloon.

So if energy/matter that was constrained to ten angulas (only according to Purusha Suktam) expanded, then matter should be seen uniformly spread across the spacetime.

But what we see in Universe today is different. There is a huge AkAsa, empty space of vacuum, everywhere. Then there are clusters of galaxies and matter sprinkled in this AkAsa. Can just bending of spacetime (gravitation) alone explain the huge empty space..?

Science says the current structure of Universe is explained by Baryonic Acoustic oscillations(1) or Cosmic sound. Vedas and Upanishads say it is caused by OmkAra or praNava.

The early Universe, was an Universe of hot, dense, plasma of dark matter, baryons, electrons and photons.

This hot, dense plasma with dark matter bends the spacetime it occupies and produces gravitational warping that compresses matter. But the baryons and electrons are charged and the electromagnetic forces repel. Hence they push back the matter.

This is like pebble dropping in a pond. An oscillating wave of photons pushes the baryonic matter to the edges.

Actually it is like multiple pebbles dropping in a pond. Multiple oscillations carried by photons push the matter differently in different directions.

Again think of a ballon which originally had some ice-cream drops aggregated on it. When this balloon expands, the drops become much far apart.

But the initial anisotropy was created by praNava, the baryonic acoustic oscillations.


PraNava - The basis of matter and beings

The Baryonic Acoustic oscillations or praNAva, creates the accumulated matter, thereby creating the 'gravitational seeds' of galaxies and stars. The molecular clouds that were aggregated became galaxies, spawning several stars. These stars, by different types of stellar nucleo-synthesis created different types of elements and compounds. These also created the planetary systems.

Those compounds with carbon then became of basis of long chain molecules, organic seeds of life and living beings.

Thus the praNava, the cosmic sound at the origin is the one responsible for the evolution of matter forms and life.  This means no new elements, compounds and life could have formed without this pranAva or OmkAra.

Thus praNava is the beginning of everything in this Universe

pra means first. Na is 'sound'. PraNava is the first sound produced in the Universe. It is the baryonic acoustic oscillation.


PraNava - The OmkAra- The cosmic sound

The Cosmic sound or baryon acoustic oscillations are produced by photons travelling in different directions and aggregating the baryons and electrons, creating anisotropies.

When pebbles drop in a pond, it produces 'harmonic' waves. Harmonic waves are waves with a frequency and its positive integer multiples. In this case, matter is pushed towards the edges at a specific rate or the multiple of it.

A simple harmonic wave, to the human ear appears as 'rigkhA' which means motion of a pendulum (which indeed is close to simple harmonic motion). It produces a 'mmmmm..' sound.

The early Universe situation was that photons were pushing the dense baryonic matter in all directions, creating these harmonic motions. At the same time gravitational force (spacetime warping) also acts on the matter and tries to pull them inside.  This would have lead to occasional flare-up of matter being pushed back and forth. This is more than harmonics. This is the sound of 'Om' where occasional flare-up sounds are followed by harmonics.

Om-kAra means that which is created by Om. The Universe is indeed Om-kAra, created by OM, or baryonic acoustic oscillations or praNava, the first sound.

Om is the akSara of everything, unto it, is explanation for matter present, future etc (and past). All the matter past present and future are made by Om, om-kAra. OmkAra means 'made by Om'.  Which is beyond the tri-kAla (past, present, future) that also is made by Om (OmkAra).