An analysis of sabda and vAk - Part 1 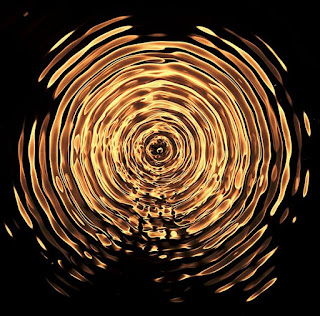 This understanding from the Vedas and Upanishads (in my view) triggered several vedanta speculations and philosophies later. More on it in the next blog.

This 2-part series is inspired from this article. and as a response to it.

According to Jaimini’s mimAmsa(3), Sabda is a quality of AkAsa. The characteristics of sabda in AkAsa is eternal and unchanged, as it is defined as the ‘dharma’ (law of Universe). Depending on manifesting agency, the sabdas are perceived and transmitted. Veda (knowledge) is born in that manifesting agency.

In this case the Sabda, the quantum energy oscillations, is eternally present in the vacuum, but is far off from perception. Hence it is called para.

Different manifesting agencies make this sabda or para perceptible. For eg. the force-field of quarks impel/vibrate the quantum energy oscillations manifesting quarks/anti-quarks, thus making the sabda perceptible. From this para, three divisions of expressions happen as explained in vakyapadiya(1).

If we take AkAsa as the ‘sky’ with air, then sabda (sounds) are mechanical push and pull vibrations of air. The characteristics of these sabda/vibrations like frequency, wavelength, velocity of propagation in a medium of sabda are all eternally defined as ‘dharma’ (law of Universe). They don’t change.

In this case the Sabda, the mechanical push/pull vibrations of air, is eternally present in the air (air is always moving/vibrating), but is far off from perception. Hence it is called para.

The principle of brahman in Sabda is akSara (that 'drip' away from the samudra, in Rg Veda Mandala 1 hymn 164), its changing/growing into objects from which the worlds gets created. Brahman is the principle of this evolution (of the sabda).

akSara is OM. Om is the first cosmic sound, the baryonic acoustic oscillations of Universe that created all the matter particles of Universe.

Brahman is evolution, that evolves quantum energy oscillations into quanta/primitive particles and into more complex particles from which the worlds get created.

Human expression
Brahman is evolution, that evolves vibrations of air (air molecule movements) into akSara/primitive sounds (syllables) and into more complex sounds from which the speech get created.

The one as mentioned gets divided (becomes multiple) because the unfiltered gets filtered into different ones.
Universe’s expression
The different force-fields filter that quantum energy into different primitive particle/quanta types.

Human expression
Our prAna filters the air into different sounds. Based on the manifestations of prAna, based on the way we inhale and exhale, sounds are produced in air.

From the time of birth six-fold changes are the source of differentiation due to which the soft/inarticulate decays over time.

Universe’s expression
From the time of birth, six different flavors (of quarks and leptons) are the source of differentiation due to which the inarticulate tone decays over time (into lightest of quarks and electrons).

Human expression
From the time of birth, six different sounds (a (aa), e (ee), ae (aae), ai, o (oo), vu (vuu)) are the sources of differentiation due to which the sound decays over time.

The one seed/cause of all of which this becomes multiple into enjoyer, enjoyed and also the form of enjoyment.

Universe’s expression
Thus one quantum energy oscillations, filtered through different force-fields, create the particles of Universe, which is the enjoyer, enjoyed and enjoyment.

Human expression
Thus prAna, filtering the air through vocal chords,  create all the speech, of the enjoyer, enjoyed and is the enjoyment.

'Sphota' are those that take the 'rupA' from Union/compression and dis-engagement/expansion of instruments (like vocal chords). So clearly Sphota is human or other artificial sounds produced by beings. Hence it is translated as 'words' produced by human beings.

Now that we know what is zabda, sphota and dvani more clearly, we can go back in the slokas and check what vakyapadiya has to say and nityatva and anityatva of sabda and dvani.

As light reveals the objects near it, on account of (nimitta) non-changing (avikAra) vibrations (zabda), on changing/transforming (vikruta) audible vibrations (dvani) are caused.

The eternal zabda, the vibrations in air or vacuum, is the 'light' that causes the more perceivable 'dvani' that is produced by compression and expansion.

The compression/union and expansion/dis-engagement actions (say of vocal chords) vibrates more the already present vibrations (either in air or in vacuum). The word/sound produced out of that action is sphota, the vibrations that are set up in air/vacuum from the production of sphota is dvani.

If there is no air molecule vibrations (sabda), dvani can't be produced. So sabda is the like the light which makes the dvani perceptible.

Same way, if there are no quantum oscillations in vacuum, the Universe's expression is not possible.

anitya (the dvani) which manifest due to certain niyama and not established as decayless, eternal , unborn, not wasted, destroyed.

The dvani born out of the Sphota, which is born due to some observances/niyama (of compression and expansion) is anitya compared to Sabda, which is decayless, eternal, unborn, not wasted, not destroyed.

The sabda are decayless, eternal, unborn, not wasted and not destroyed. They are anitya. The dvani that radiates from Sphota, which is produced by compression and expansion is not anitya. it is nitya.

Sabda is nitya. dvani is anitya.

Those well versed in Vedas know the pariNAma of sabda, the vibrations. The Universe changes/evolves primarily to the Chandas due to this pariNama.

Universe’s expression
Those who are knowledgeable know the transformation of quantum energy oscillations in vacuum (sabda). The Universe changes/evolves primarily to the chains of compounds and complex substances from these mere oscillations.

All the actions/deeds of Universe are by these sabda. From the youngest, step/word by step/word it grows building on previously placed preparations/accomplishments (past experiences).

Universe’s expression
All actions/deeds of the world are made of the quantum energy oscillations. It builds on step by step, word by word, on the previously placed joint-actions/works (saMs kAra)

Human expression
All actions/deeds of the world are made of vibrations of air. It builds on step by step or word by word, on the previously placed joint-actions/works.

The starting action arrangement, is setting the prAna in motion, prAna striking the unnamed places not without producing the vibrations.

Universe’s expression
The starting arrangement is setting the force-fields in motion, striking unnamed places/positions not without producing quanta of particles. prAna are the force-fields here.

Human expression
The starting arrangement is setting the prAna (breathe) in motion, striking at unnamed positions, not without producing the different vibrations of air. prAna is breathing here.

Nothing becomes convincing in the world when accompanying zabda is not honored. All knowledge are found when by the appearance of the sabda.

Universe’s expression
All matter are found by the appearance of the quantum energy oscillations.

Human expression
Only when people honor the words/speech that accompany (an object or an action or an explanation), they develop new knowledge. Thus any knowledge that people find are due to speech rather than without the speech.

vAg-rupA is if ascension of the consciousness perpetually, no light shines just by thinking. (it has to become words or action for light to shine).

When does the 'rupA' or external forms of consciousness occur..? It occurs when the thoughts continuously ascend (and make the prAna to go up and strike the unnamed positions producing sound). No light shines just by mere thoughts or thinking.

Universe’s expression
The outwardly form of matter is if there is ascension from quantum energy oscillations of vacuum. No electromagnetic force (or any other force-field) manifest if these oscillations do not rise and manifest in these force-fields.

Human expression
The outwardly form of speech is if there is an ascension of the thoughts from perpetual consciousness. No light shines just by thinking. Likewise for any outwardly speech, thoughts have to work on prAna.

vAg - The rupA of avabodha

vAca is outward expression. ‘Uvaca’ is speak/expressed. Uvaca indicates something expressed intended to be meaningful for the receiver.

The air molecules are always vibrating. They don't produce human speech.  When human beings express through compression and expansion of say vocal chords, the sounds acquire the 'rupA' form and it becomes vAca. Then the expression together with the default vibrations of air is called 'vAg'.

The four levels in vAkyapadiya(1)

Para is the ‘shelter’ on which three divisions of vAca namely vaikhAri, madhyamA and pazyanta become three extraordinary multiple paths.

Often people quote that vakyapadiya accepts only three forms of vaca, while other texts quote four.

But I don't see actually a difference. vakyapadiya considers three divisions of outwardly expressions of vAca and the para from which the vAca rises.

In Universe’s expression, para are Quantum energy oscillations of vacuum. It is beyond universal expressions (hence parA).

In human expression, parA are the oscillations of air molecules that are ever present. It is beyond expression of human speech (or behind that expression) and is not subjected to human grammar.

According to the vrtti (4) of vakyapadiya(1), pazyanti is the perception/thought of producing a sound, in human mind. This is in the human expression. This is thought arising from the consciousness.

According to the vrtti of vakyapadiya (1), madhyama is action performance of generating a sound. It is invoking/instructing the prAna to ascend, strike unnamed places and produce sounds.

In Universe’s expression, madhyama are the interactions (forces/sweep that do not have a 'form' or rupA) between multiple force-fields and their particle manifestations that lead to manifestation of matter forms. For eg., strong, weak, Higgs interaction with Quarks, weak,Higgs, electromagnetic interaction with electrons etc..

According to the vrtti of vakyapadiya (1), vaikhAri is actually conveying sounds with grammar as defined by human intellect, agreed between sender and receiver.

In Universe’s expression, vaikhAri are the atoms, elements, compounds that make the matter in Universe.

The Sabda /para, as quantum oscillations in vacuum is beyond Universe's expressions of matter as guided by the pancha-purushas (2). Hence it is aupurusheyatva.

The sabda or para as vibrations of air molecules is beyond Human expression/grammar. Hence it is aupurusheyatva.  The three outwardly expressions (vAca) sheltered on para/sabda, viz pazyanti, madhyama and vaikhAri are based on 'buddhi' of human beings.  Hence it is said to be purusheyatva.

Sabda and vAk in Veda, Upanishads and Vedanta and comparison with kanzas paper..