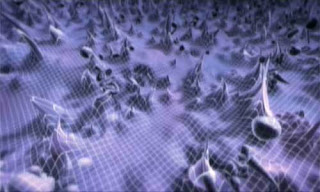 Atma tore apart Purusha and Stri due to 'desire' or 'iccha' to enjoy (rame) and not due to fear. Of these purusha does not have desire to manifest. Stri becomes filled in vacuum or empty space. All matter and beings are born from Stri. Manifestation from Stri occurs in pairs.

Let's stop and reflect back on what we learn in the previous slokas.

"That this Atma into two flies off/tore apart/expands fast". The word used for what I described as 'tore apart' is 'apAtayat'. apAtayat can be described as flying off, expanded greatly, inflation, falling off etc (essentially moving away fast).

What happens due to this tearing apart or that fast expansion..?

When that inflated into being a two-fold, the Svar, the interstellar space, became like the half-piece. It got established, literally quite fast, just like a pea split or torn into two halves. ardha-brgalam could also be translated as a half-split pea.

Due to the tearing apart or inflation that happened, the 'svar' (interstellar space of Universe) get established like a pea torn apart. This Svar, the inter-stellar space that got established was just 'AkAsha' or empty space or vacuum.

All the Universe arises from this stri in pairs.

How does manifestation occur from 'Stri'. It occurs in 'mithuna' or 'pairs. From minutest to largest of matter and beings in Universe arise from the pair production that arises in Stri.

Knowledge and desire seem un-related to the naked eye. But they are two different manifestations of the same.

In something that is standstill, there is no information.  If that standstill is at a ground level with zero energy, it has no energy also.

mantha is translated as stirring around. Actually it is oscillation or fluctuation. Anything that is oscillating (manthAt) has 'information' and 'energy' in it.

Information in oscillations (mantha) associated with in-animate matter parlance is called entropy. In animate beings, it is called knowledge (Veda).

Amount of energy in oscillations associated with in-animate matter parlance is called enthalpy. In animate beings, it is called desire (iccha), which propels the animate beings to perform actions.

She (Stri) knows "I am myself creation" "myself is the 'blood' of everything", in that way creations manifest. All creations are through her and unto her is well known.

The 'Svah' the heavens which was only AkAsa the empty space, got filled with Stri, which does pair production. How does Stri do it..?

Stri acquires information or acquires oscillations. Her oscillations (information, knowledge) becomes the blood of everything that is created and that triggers further creations.