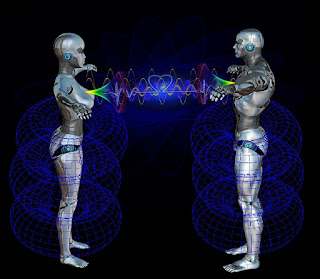 Atma existed before any kinds of Purusa. Atma is the ‘manas’ as it ‘sees itself. It was all alone. It is also the ‘aham’ that exists before any expression. Now we use the word ‘aham’ to indicate ourself, as 'aham' is the 'Self' or 'Atma' in us.

That which is the previous of all, in which everything is digested, that is Purusha. It does not have desire to manifest or evolve.

Our manas develops a fear, which arises from being alone. Fear comes when there is more than one. So the manas has nothing to fear if it is all alone. Similarly Atma also does not have any fear in being all alone.

When Atma is alone, there is no enjoyer and enjoyed. The 'desire' to enjoy and be enjoyed triggers manifestation from the unmanifest Atma. Thus manifestation happens out of desire and not out of fear.

Atma has the feature of a male-female in close embrace. Atma tore them apart separating the male and female due to this desire to be the enjoyer and enjoyed.  Yajnavalkya says the two are like half-fragments of each other.

The Stri fills up the empty space or vacuum. From that female, the manuSya take birth. The Purusha remains digested/burnt-out and does not manifest.

She (sa) became (abhavat) buffalo (gaura) and other bull (rsabha).

They both manifested together. Then the class of 'cows' were born.

this goat (aja etar) manifests (abhavat), the other he-goat, the other ewe, other sheep all these manifest together. The class of sheeps and goats were born.

All-alone (evam - eva) whatever (yad) here (idam) in pairs (mithunam), from the ants (a pipilikabhya) that (tat) everything (sarvam) took birth (asrjata).

She (Stri) makes a glance and rejects "How atma produces parents (manifest) as itself is unmanifest..?.

She becomes like the buffalo and bull manifest together from which class of milch cows were born, Mare and stallion, from that all equines are born, He and She goat from that all goats and sheep are born. Everything takes birth in pairs from the ants (minutest).

Stri fills the empty space or vacuum (akAsa).  From this empty space manuSya are said to be born. How is it even possible to have manuSya born out of vacuum..?

Stri rejects that Atma can trigger manifestation out of it as Atma itself is unmanifest. But then Atma does trigger the generation of 'parent' pairs out of Stri.

Thus somehow Atma produces 'parent' pairs out of Stri which fills all the vacuum (akAsha) and thereby starts the evolution.