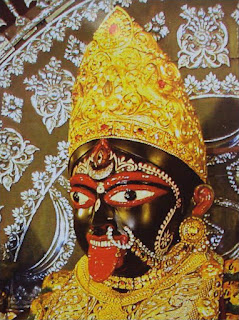 But this is looking at energy in an abstract way, trying to make sense of energy. This is how the concept of Ardha-Nareeswara, Linga et al evolved.

Then energy manifests in this Universe in two forms. A masculine form which does not undergo any change. A feminine form which changes, evolves and evolves the Universe.

Energy as 'male' and 'female'

Then there is energy which is 'seen' as property of matter that can be converted to heat, work, or radiation.  When the vacuum energy raises above a threshold, it manifests in different force-fields, forms particles, binds and evolves particles, or breaks and decays particles.  This is the 'feminine' form of energy that undergoes change driving the evolution of matter.

There are two types of feminine form of energy. They are Potential and Kinetic. The energy from which matter particles can derive their future evolution is the potential energy. Kinetic energy is the energy in the current movement of particles.

This is how the concept of Shiva-Parvati-Ganga evolved.

The Creative energy is the 'aditi', Hence called the Mother. 'aditi' means that does 'not cut' or 'not divides' or 'not breaks'. aditi is rather the energy that binds or creates or evolves the matter into more complex forms.

The Destructive Energy is the 'diti'. 'diti' means that cuts, divides, decays etc. Any destructive energy that affects the particles is Diti.

This is how the concept of Parvati (Creative) -kAli (destructive) evolved.

The energy that binds and evolves matter particles are the various 'binding energies' as described in standard model. They typically manifest in
These binding energies are the Aditya, as they are said to be descendants of  Creative energy, the aditi.

The energy that 'Matter' particle manifestations draw and evolve from the energy that surrounds them in different force-fields is like the energy that biological beings draw in the womb of their mother. Hence Aditi is the 'Mother' of entire Universe.

In these energy particles dock and evolve (as they do in mother's womb). Thus binding energy is the landing area for particles to combine.  Hence such energy is called Uma. 'Uma' means landing area or a docking place for ships. Hence Uma is the 'Mother.

These energy types are the 'knots', 'joints' and 'bindings' between different particles in complex matter forms. Parvan means 'Knot' or a 'Joint'. Parvata are those that are 'knotted' or 'jointed' (like the hill ranges).  Hence such binding energy types are called  pArvati.

This pArvati, Uma, aditi of matter creates newer forms of matter and the entire Universe. Hence they are the jagad-Amba, jagat-mAta etc. Since this energy that propels matter evolution is the 'cause' of every matter form in Universe, this energy is called the bhavAni.

Aditya are twelve descendants of this Aditi which play a specific role in the evolution of Universal matter. They are the twelve different energies (binding energy) as described in the Standard Model.

'Diti' are the 'destructive' energy that breaks matter particles. 'Diti' means 'cut' or 'divided'. Daitya are descendants of Diti.

The energy of Weak force-field (Simhika) is 'mediated' on to particles that have weak charge (kAla) by a class of particles called 'Intermediate Vector Bosons'. These intermediate vector bosons try to destroy the particles. Hence they are said to be the descendants of 'Diti' and called the 'Daityas'.

Daityas are the mediators which mediate the energy of weak force field on different particles. They are the energy mediated by different 'Intermediate Weak Bosons'.

Higgs field impedes the motion of particles, concentrates them and thereby create a region of energy density in spacetime. This is what leads to perception of 'mass'.  This is the Vishnu.

Particles (particularly the pancha-Jana, the five races of quarks and leptons) which are impeded by Higgs field 'interact' with Higgs field. This interaction is characterized as a 'coupling' in the Standard Model. This coupling is called 'Yukawa coupling'.


Vishnu and the Daityas

This is how the puranas of Jaya-Vijaya, their three births and ten avatars of Vishnu evolved.


Is kAli and Simhika really destructive..?

kAli is the weak-force field energy that particles experience. Simhika is the energy that manifests in weak force field. Both kAli and siMhika seem to be destructive forces.   But without weak force-field decaying, the following are not possible

1. The ten different particles of Quarks and Leptons which make the Universe
2. Flavor switching (Massive quarks and leptons becoming lighter and vice-versa)
3. Charge-Parity violation that leads to generation of matter over anti-matter
4. Slow decay of various particles and complex matter forms over time

Thus these forces are not really ultimately destructive. They play the role of being destructive to evolve the Universe further.

This is how the concept of destructive forces (in the tantras), but more playing the role of destroying the 'evil' (in puranas) evolved.