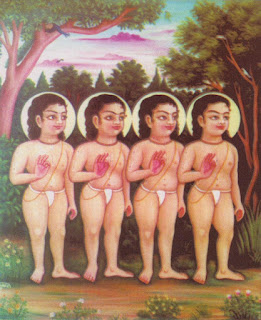 I had explained the concept of Spin, handedness, fermions, pauli exclusion principle, force mediators etc using the Conch and Wheel in the earlier few posts.

The Conch of Vishnu, known as pancha-janya, the dirac-spinor field, gives rise to five races of particles. The five races are
1. Quarks
2. anti-quarks
3. Charged Leptons
4. anti-Charged leptons and
5. Neutrinos.

We already saw that particles that rise out of this spinor field, conch, have 'handedness' called Chirality.  All particles possess intrinsic angular momentum and motion due to which this handedness or chirality is perceived as 'helicity'. Thus particles can be classified as 'right-handed' or 'left-handed'. I had explained it in previous chapters.

So what happens to this handedness.? Where are in they in these five races..?

The Conch of Vishnu is not just a spinor field and more precisely called 'dirac-spinor' field as these are fields with 'mass' terms, as Vishnu (the property of mass) holds them.  This spinor field interacts with Higgs field and acquires mass.

Shiva, the Energy is also depicted as holding Conch.

But the 'Conch' of shiva does not lead to any particles as we know it, as it is massless. Only 'mass' causes the birth of particles.

But it is also the 'mass' that causes the decay of particles.  How..?

'kAla’ which is the weak charge and also  ‘arrow of time’ (we will see how later) does not elapse for them. They remain eternally young. They are the four ‘kumara’ called Catur-Sana, which means the four that remain the same from the beginning. (They never grow/decay).

Except these four kumaras, all other particles are subject to weak force and decay in course of time.

Since all these four are excitations of the same field and they don’t decay by weak force, they are pictured as four kumaras that are always together.

These four Kumaras exist in the Universe independently and moving around before mass manifests and mixes them up. They are excitations of weyl spinors.

They are the one's that Brahma is said to have created, but who did not want to evolve/grow and remained 'ascetics' for ever.

But the property of mass acquired by Spinor fields mix up the Right-handed and left-handed particles. Thus every particle has a component that has kAla the weak-charge and another that does not have weak-charge.

A particle and anti-particle are differentiated by Yama (Electric Charge) and kAla (Weak Charge).

In Standard model, a Particle and anti-particle are differentiated by the following:
1. Yama / Yami (Charge or Charge Conjugate)
2. Right / Left (Helicity) which maps to kAla, the weak-charge
3. Lepton number to satisfy conservation of lepton number (Will explain this later)

For eg., an anti-particle of Left-handed electron is Right-handed positron. They differ in their Charge (Yama- Yami) and handedness primarily. But handedness maps to weak charge, kAla.  Hence particle and anti-particle are differentiated by Yama and kAla.

But any massive particle has its handedness mixed, because higgs field interaction mixes up the handedness. Hence for any particle with mass, it is primarily the Charge, the Yama, that is the differentiator.

But then there is also a particle with neutral charge. They are the neutrinos.

For neutrinos with neutral Charge, which do not have yama, the electric charge, the anti-particle definition becomes tricky.

Hence the 'massive' races that emanate from Conch of Vishnu, the Dirac-Spinor field are only five.