The stories of Ganesha and Karthikeya 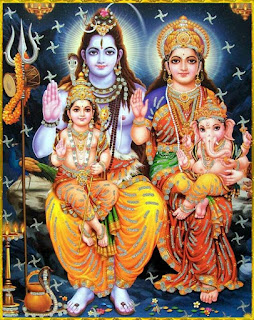 The story of Ganesha and Karthikeya fighting for 'jnAna' fruit is a familiar one. The basic story is like this.

Shiva and Shakti want to give a 'fruit' of jnAna/wisdom to their sons. But the challenge is it cannot be apportioned or divided between them. It has to be given completely and hence to only one of them. So they hold a challenge. Whoever comes around the Universe first, they would get the jnAna fruit completely.

This story is interpreted in various ways with different philosophical masks and meanings. I see this story differently. I think it is interpreted as a 'story' from scientific explanation of a physical event that happens everyday.

Shiva is energy. Shakti is Momentum.

The 'fruit' they are giving is 'Entropy' (dis-order, information, knowledge, jnAna). Who will get jnAna the entropy, when energy is added..?

Ganesha is entropy causing energy which manifests as 'phase-change energy' or 'potential energy'. Karthikeya is heat causing energy. Heat is 'average kinetic energy' in a system of particles.

When energy is added to a system, it can manifest as potential (phase change energy) or manifest as heat/kinetic (raise in temperature).

When it manifests as phase change energy, it breaks the bonds between molecules, changes the phase of matter and increases overall entropy (information content) of the system. This is what happens say when ice turns into water. Here energy is spent in increasing entropy as it manifests as potential (phase change) energy.

This skanda has six forms or six faces.

The story of kArthikeya

Once Siva's fluid (Seminal or sparks of third eye or perspiration) fell in a pond in a place called 'Sara-vana'. Six krtiikA sisters who came to bathe in the pond took up these sparks, which became kids in their hands; they nursed them as six different children.

In some versions the seminal fluid/perspiration was gobbled by Agni ; pArvati asked/cursed Agni to deliver it safely somewhere in earth; Agni delivered it in Six krttikA's womb making them pregnant; their husbands (six of the seven Rishis) divorced them for it; these six krttikA sisters delivered six babies and nursed them.

In some versions svAha loved Agni; Agni loved six krttikA sisters who were wives of sapta rishis. svAha transformed herself into six krtiikA sisters and made love with Agni who delivered siva's semen into them and she delivered six kids as six sisters and nursed them.

In all the main story line is a part of Shiva branched into six, acquired six different forms nursed by six krttikA sisters.

Then pArvati took all these six kids in her hands and made them into one with six heads. She had a boon from Shiva that they will be seen as 'one' and they will know only pArvati as their mother. Shiva granted the boon.

Energy (Shiva) is the one that is characterized by Momentum (Shakti).

When Agni delivers 'energy' to matter, 'heat' is produced. 'Heat' is the vibratory motion (kinetic) possessed by particles. This heat is produced in six different ways in a body of particles or matter.

There are six 'skins' or 'forms' for heat production. krtti means 'skin' or an external clothing. krttikA are which are skinned or clothed.

1. Vibratory motion of a particle is impacted by absorption or emission of EM radiation

2. Vibratory motion of particles are impacted by breaking and forming of EM bonds

3. Vibratory motion of charged particles are impacted by electric field they move in

4. Vibratory motion of charged particles is impacted by the magnetic field they move in

5. Vibratory motion of particles are impacted by the gravitational force, the warping of spacetime

6. Vibratory motion of neutral /charged particles is impacted by the laws of motion in spacetime

These are the ONLY six different ways 'heat', the vibratory motion of particles, can be produced. When energy is delivered to matter (Agni), heat is produced in a body of matter in these six different forms/ways.

When a body gets heated up, it is not possible to distinguish which of these is causing the heat. All 'heat' appears as one heat. 'Heat' may have originated in six different ways (krttikAs), but the body makes it as one 'heat' with six different heads.

This 'one' heat concept brings us to Zeroth law of thermodynamics.

The zeroth law of thermodynamics has many forms. All of them convey one message. There is only one heat thought it might have appeared in six different forms. Temperature is one-dimensional. We can arrange bodies 'heated' up from 'hot' to 'cold' linearly irrespective of the method by which they are heated.

A body might have been heated by radiation. Another one by friction. Another by pressure or magnetism or flow of charges or chemical reaction. All of them produce only one heat measured by one temperature.


The story of Ganesha

Parvati wanted to take bath. She creates a 'boy' and asks him to guard and not allow anyone inside. When shiva tries to come in, boy does not allow Shiva. Shiva cuts the head of the boy in rage. On seeing this, pArvati wants to restore the boy. Hence shiva fixes a large head of an elephant on the boy and makes him to come alive. Thus Ganesha, the elephant-head god was born.

Shiva is Energy. Shakti is momentum. Parvati is the energy locked in matter.

Let's say there is a system of particles. They have two characteristics.

But in reality achieving a ‘absolute zero’ temperature is not possible. Hence at whatever lower temperature (cooling which is bathing) is achieved, the number of microscopic states gets reduced to a minimum but is more than 1. Hence there is said to be a ‘residual entropy’ in the system.

Now in this state of particles with residual entropy, no additional energy (Shiva) can come in, not even a single photon, without increasing either the number of microscopic state of particles or making at least some particle excite differently from others. If Shiva or energy has to be added to this system, the entropy and/or temperature will have to change.

We can say the residual entropy in this system of particles that is cooled down, is like the ‘boy’ in the shiva story that guard against any additional energy (Shiva) coming into the system. The boy has a minimal (or only one) set of information, which is not to allow Shiva in.

When additional energy (Shiva) is added to any system, they result in increase of entropy as well as temperature.

Increase in temperature means simply excite the particles more. That's all. But if they have to result in a large entropy change with little temperature change, then some specific set of actions have to take place.

This is what is well explained in this story.

This is similar to giving a larger head (or headroom or space) for some particles in the system of particles.

This breaking off bonds and creating a larger space for some particles in the system of particles, when energy is added, is visualized as cutting off head and fixing an elephant head by Shiva (energy).

Hence Ganesha always symbolizes a a new beginning. We start with Ganesha for all activities.