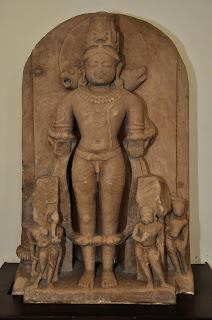 In the last 2 blogs I had described the ‘scalar’, vector and spinor fields and particles that rise from the spinor field. Apart from Sura, Asura, Rakshasa and Yaksha, there are few other celestial beings that are talked about in Vedas and Puranas. They are Daitya, Aditya, Apsaras, Gandharva and Devas. Let’s go into these..


Force-fields as abodes and weapons

They are ‘abodes’ of Energy (Shiva), Mass (Vishnu) or Charge (Yama).

These force-fields are weapons when they deliver the ‘forces’ in them.
We will see more on these ‘weapons’ and how the stories around these make sense.

Strong force-field binds the Quarks into protons and neutrons. It also binds the protons and neutrons causing the Atomic nucleus. Though atomic nucleus is made of Quarks and masses of Quarks, the primary mass of nucleus comes from its binding energy caused by Strong interaction. That is strong force-field causes a huge binding energy and energy density which constitutes the 99% of mass of a nucleus.

Weak force-field causes slow decay of particles into other forms of particles. It is ‘massive’ as it interacts with Higgs scalar field and acquires mass. Since mass is Vishnu, Weak-force-field is called sudarshan Chakra.

The vector ‘weak’ force field, sudarshan chakra is capable of destroying/decaying all the five races of fermions (excitations of spinor field) anywhere. But this field becomes the ‘abode’ of Vishnu, the mass. It is because Vishnu, the mass takes abode in this field, this field is made ‘dull’ or ‘slow’ or ‘weak’.

Electromagnetic field mediates electric charges (+ve and -ve). These charges are used to ‘bind’ nucleus and electrons forming atoms, binding atoms to form elements, molecules, compounds and larger macro structures of Universe. This binding is called ‘pAza’. It also causes instantaneous destruction of particles and their conversion to pure energy/light/electromagnetic field when particles opposite charges collide with each other. This annihilation is called ‘mrtyu’.

When a particle decays by strong force-field and becomes different other particles, it is said to go to ‘kailAsa’.

vaikuNTha is not only the abode of Vishnu the mass.  It can also be seen as a name for Vishnu (mass) with Chakra (vector force-field). VaikuNTha as Vishnu is called Chakra-perumal or Chakra-th-aazhvaar. The vaikuNTha vishnu is depicted as Vishnu with Gada (mass) one one side and Chakra (weak field) on another side, both looking upto Vishnu in the middle.

There are four important ‘fluids’ that are being talked about as ‘drunk’ by these particles. They are ‘Soma’, ‘madhu’, ‘Apa’ and ‘Amrt’.

An act of ‘drinking a liquid’ represents an ‘interaction’ with a particle. For eg.
The force-fields when they interact with particles become strong interaction, weak interaction or electromagnetic interaction.

So what causes a particle to drink/interact with Soma (Strong), Madhu (Weak) or Apa (electromagnetic)..? These particles need to have a ‘tendency’ to drink Soma or Madhu or Apa.

This ‘tendency’ is called ‘Charge’ in quantum physics.


Particles and their interactions

There are five races, pancha-janas and further classifications of them based on handedness, flavor, color, charge etc.

These five races are excitations of spinor field, the fermions (the Conch). They are quarks, antiquarks, electrons, positrons and neutrinos. I did not add anti-neutrinos because I consider neutrinos as ‘majorana’ form and not dirac form (will delve more on dirac and majorana form later).

These races can be classified based on Chirality (Left or Right handed), Flavor (mass), Color Charge and electric charge and Weak charge.

kubera is Color Charge. Yama/Yami is the electric charge. kAla is the weak Charge. Will go through each one of them in separate blogs later.

Ku-bera is which is 'deformed'. It is the Color charge of Vaizravana, the gluons. I will delve on it separately later.

Yama is Charge and Yami is Charge conjugate. Particles that possess yama (Charge) are particles. Particles that possess Yami (Charge conjugate) are anti-particles. Yama (Charge) and Yami (charge Conjugate) are born together in a process called ‘pair production’. When High energy photons split, they split into fermions (Spinor field excitations, Conch) of Particle (Charge) and Anti-particle (Charge conjugate). Since they are born together as pair in particle and antiparticle, they are said to be brother and sister or ‘twins’. They should NOT ‘marry’ each other as the merger of particle and antiparticle causes annihilation.

kAla is the weak charge. Particles that possess kAla (weak charge) decay slowly as weak charge is ‘weak’. This is called ‘kSaya’. This is like aging (jara), becoming old and decaying.
‘kala’ means ‘anything very small/minute’, ‘a minute amount of time’. It is used to denote something very small. Very small period of time is called ‘kala’. Hence kAla is a very ‘weak’ charge and acts very ‘minutely’.

There are particles that possess kAla and there are those that do not have kAla, the weak charge.