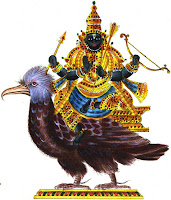 In response to a request to write about
Saneeswara, Tirunallaru and stories that come around it

The son of Ravi, brother of Yama, non-cognizable blue (ultra-violet), that comes together as a shadow from the Sun (that springs from lifeless sphere), to that Saneeswara, salutations.

Anjana is translated as ‘non-cognizant’, ‘illusory’ etc. It is interpreted as a mountain. Neela anjana is the illusory/non-cognizable blue which I translate as ultra-violet. samabhasam means 'appearance'.

'raviputram' is Son of Ravi. Ravi is sun. yamakrajam is brother of yama. chAya mArtAnda sambhutam means 'the shadow/shade that comes together from that springs from a lifeless egg'

At first the molecular clouds are life-less. They are mrta-anda (life-less spheres/eggs). But due to gravitational pressure, they compress and the lifeless sphere starts heating up. As it comes to life from being dead, it is called mArtAnda (that sprang from the dead sphere). It starts producing light. Then it is called bhAskara (light-maker). Further gravitational compression and heat starts nuclear fusion making it a star. Then it starts emitting a whole lot of radiation including visible, invisible spectrum, neutrinos and other matter forms. Now it is called Ravi.

UV radiation comes from the Sun as a shade of visible spectrum. That UV radiation is saneeswara.


Saneeswara, UV and its effects

1. UV is just another Electromagnetic (light) radiation beyond the visible light spectrum. On Earth, it comes from Sun.

3. The UV radiation is classified into UVA, UVB and UVC. 95% of UV radiation reaching earth from sun is UVA and some UVB. Much of UVC is blocked out by ozone layer in atmosphere.

4. The UV radiation is harmful and at the same time beneficial. UVA and UVB are dangerous to human beings in prolonged exposure. UVC is harmful in short exposures. The blue and UVA are disinfectants of microbes and hence extremely beneficial to human beings. Most of our foodstuff get disinfected with exposure to sunlight due to blue and UVA radiation occurring naturally.

10. Darbhai has different internal molecular/nano-scale structures compared to other grass forms, that promotes microbial adhesion. This means microbes get attracted to darbhai and this process reduces overall microbe accumulation in whichever food stuff darbhai is placed.

11. During solar eclipse, blue/UVA radiation are cut-off from earth, resulting in microbes growth in food substances. Placing darbhai on them reduces the microbial growth, as microbes are attracted to nano-scale features of darbhai grass.

11. Hence naturally, a forest of darbhai cleans up the surrounding place and makes it purer during eclipses. So darbhai (the lord of forest of darbhai) treats issues that arise out of lack of exposure/blessings of Sani (UV).

12. Long term exposure of Sani (UV) causes free radicals in body that result in variety of diseases from simple sunburn to skin cancer.   Darbhai has anti-oxidant properties and is suggested to be used in treatment of radicals induced diseases that cause DNA damages.

13. In Ayurvedha darbhai is used as a drug for Urinary tract infections and mild diuretic, making kidney to clean blood better. It is used as a biological 'purifier'.

14. Saneeswara in my view is actually blue/Ultra-violet non-ionizing radiation. Saneeswara is son of Ravi (Sun). He is neela (blue and ultra-violet and hence i call it UVA). He is the son of ChAya (shade of visible spectrum, beyond the visible spectrum). This blue/UVA is what mostly reaches earth from Sun. This neela has both harmful and good properties.

17. As darbhai attracted microbes and also had medicinal properties, water bodies around around its forest, are assumed to be pure/purificatory in nature. Various teertha's (water tanks) around the temple acquired their sanctity due to the the darbhai forest.

Our Earth is exposed to not just solar UV radiation but many other radiations from deep inside Universe like Cosmic rays (very high frequency electromagnetic radiation) and even protons, electrons etc.

These radiations are held in what is called as Van Allen radiation belt around earth by Earth's magnetic field.

The earth's magnetic field arises due to hot molten magma at its core, which is ionized plasma rotating along with earth's rotation. The magnetic field of earth is not uniform. Its horizontal and vertical intensity varies at different places due to structure and other properties of the earth's core.

Is Tirunallaru the place where such magnetic field intensity is high..? The horizontal intensity around south of India is in the very high 10’s of thousands of nano Tesla range. The vertical intensity is average. So there is no specific importance for Tirunallaru, except for the fact that it was the place of a forest of darbhai.

Does these affect satellites to pause or stop..? No. These, in my view has nothing to do with Tirunallaru.

Short answer is No.

But all plants and grasses attenuate radiations. A pile of such grass would indeed attenuate any radiation. For a pile of darbhai (kurcham) to attenuate strong radiations it has to be several ft (may be 10+) thick.

A thick forest of darbhai (or any tropical grass) could attenuate UV or X rays for species inside the grass. Whether nano-scale features of darbhai grass can do better attenuation job has to be studied. But it is absolutely false that a blade of darbha grass attenuates 60% of X-rays.