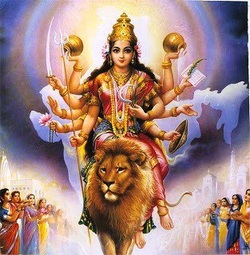 Very often Vedas, Upanishads, Puranas or saMkhya are seen as 'distinct' literatures that developed at different points of time.  They are also interpreted as different philosophies.

In my understanding it is not true. They are all part of the same thoughts flowing across.

Before I proceed with saMkhya kArika, few more words on Energy as seen in Puranic texts from what we understood in saMkhya context.

At first the Hiranya-garbha, the uterus of four dimensional spacetime manifested.

Then the Hiranya-garbha expanded to Brahma, the expanded spacetime, during cosmic inflation. On this Brahma, the Rudras or force-fields manifested.

In this Universe, Shiva, the energy is the sthula (gross) and hence masculine.  Energy (Shiva) is always characterized by Momentum (Shakti). Hence Shiva is Ardha-nareeswara. Since momentum is the 'sukSma' or property of energy it is feminine and called shakti.

Thus one can say it was the time of Adi-Shakti, parA-shakti or Radiation dominated era (in Standard model parlance).

Then, in standard model parlance, the Electro-weak symmetry breaking occured and Higgs field acquired an expectation value. The Higgs field impedes the motion of energetic particles, slowing them down and gives a perception of 'mass' to these particles. Thus mass manifests in particles depending on their interaction with Higgs field.

Vishnu is the 'mass' when perceived as gross or sthula form. Gross or Sthula form is masculine. Since 'mass' is actually only a perception of Higgs field impeding particles movement, it is the 'mAya' (not real). The mAyA perception is sukshma or subtle and hence depicted as feminine.

The Universe before Electroweak symmetry breaking is North and after EWSB  is 'South'. South is 'dakSa'.

Post EWSB, most of energy gets locked up in matter particles that have 'mass' (impeded by Higgs field).  They become the 'subtle' or 'sukshma' and hence feminine. This subtle energy that resides in matter with mass, in south of Universe is called 'dAksAyani', daughter of the South.

Before EWSB energetic particles of quarks and electrons were moving at speed of light all over the universe. Post EWSB, Higgs field acquired an 'expectation value' and the particles started interacting with it. This interaction is bit like anchoring of  ships. Depending on the anchoring level (interaction level)  the speeds of particles get reduced.

This pArvati, the binding energies of matter creates newer forms of matter. Hence she is called jagad-Amba, jagat-mAta etc.

Since the binding energy is the 'cause' of every matter form in Universe, this energy is called the bhavAni.

Aindri, are the binding energies of Indra (baryons), the baryonic binding energy (protons). Hence pArvati is also known as Aindri.

The nuclear binding energy is born in the mountains of nucleus in atoms. Hence she is the giri-jA, shaila-putri etc.

The binding energy pArvati, creates the 'self' or property of existing independently. For eg. Quarks become hadrons, hadrons become nucleons, nucleus becomes atoms, elements and compounds and more complex matter forms due to various binding energies contributing to become 'internal energy'. This internal energy is Aham-kAra, the one that makes 'independently' existing particles, particles with their own self.

This binding energy or internal energy exists from the beginning in the matter. Hence called 'Aadya'.

This internal energy is not measurable. Hence it is Ameya. But changes in it can be measured.

This internal energy in the matter rules over the matter interactions. Hence called 'Aarya'.

This internal energy in the matter is not perceptible. Hence called 'Abhavya'.

The 'internal energy' is the greatest property of matter that heralds the dawn (diva). Hence it is mahA-devi.

Since the internal energy is part binding energy (pArvati), part kinetic energy (mahA-lakshmi)  and causer of entropy (sarasvati), it is the vAk devi.

If pArvati, Uma are the binding energy or the potential energy, then durgA is the Kinetic energy, which cannot be crossed over (dur-gA).

Kinetic energy manifests as energy that causes the motion in all matter forms. Brahma (spacetime), Vishnu (mass) and Shiva (Energy) together create this Kinetic energy, the durgA. This kinetic energy of matter forms created by the trinity is called dur-gA. durgA means that cannot be crossed over.

This kinetic energy  causes fear and hence called kAla-bhairavi. But since the radiated energy (Gauri) removes all the fear, she is also the bhaya-nAsinyai.

Since this kinetic energy exists as a property and alone in the matter with mass, it is the Brahmacharini.

Since this potential energy exists in every matter, it is the 'paramAyai'

Since this potential energy exists all alone as a representative or messenger of Shiva, the vacuum or ultimate energy, she is called the Shiva dhutyai.

Since this energy is property of the force-fields (rudra), it is the 'Raudri'.

Post EWSB, the particles with mass are the 'sthula'/gross and masculine. Energy in it becomes 'sukshma'/subtle and feminine. The energy in it is Uma/pArvati/durga the consorts of Shiva, the vacuum energy with various names.

What is Lakshmi then..? Lakshmi is the property of matter with mass.

Lakshmi are also the eight properties of biological beings.

1. Sthula is masculine, Sukshma is feminine