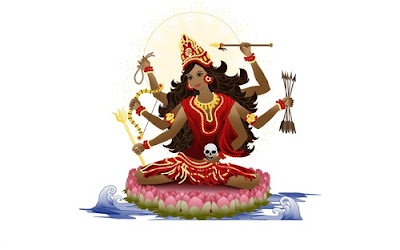 Before I go on with slokas, as a corollary of saMkhya, I wanted to write about prAna pratishta.  Whenever we do any puja (Sarasvati, Lakshmi, Ganapati etc) we first do prAna pratishta.

The process of prAna prathisthA converts an idol into a 'mUrthi'.

'mUrti' means an embodiment. It is a manifestation of divinity in idol and not just the idol of divinity.

2. Symmetry breaking leading to building up of next level of matter complexity. For eg. force-fields to particles, particles to atoms and compounds, compounds to life. This classical matter world is guided by Potential Energy, Kinetic Energy and Entropy.

4.  Finally we invoke the 'aham' (self) in us in the Idol and make it the mUrthi.

In the prAna prathistA mantra, the above are invoked in the following way

In the prAna prathisthA process, finally we invoke the brahman in us, in the idol. That makes it a living entity.

This process of giving pancha-prAna to idol making it a 'mUrthi', mimmicking the Universal evolution process is prAna pratiShtha.

nyAsa means depositing or delivering.  We deposit/deliver our energies in the idol and invoke our self in the idol.

In RSyAdi nyAsa we invoke the RSi and Chanda and deposit/deliver them to the idol. RSi are symmetry breakers


The Rishi, Chanda and Devata

Any devata (deva or devi) including the pancha-prAna devi is established in three steps. They are

1. Originated by a Rishi (Symmetry Breaking)
2. Having a specific form or expression (Chanda)
3. The devata with a purpose (Devata)

In science 'Symmetry breaking' occurs when small fluctuations acting on a system break the symmetry of the system, bringing it to a more dis-orderly state. A dis-orderly state is a newer form of expression with more information, more knowledge and it leads to further evolution of matter and beings.

Thus Brahma (Spacetime), Vishnu (Mass) and Mahesvara (Energy) become the Rsi (symmetry breakers) for the pancha-prAna and establish this devi in all matter and beings.

2. Acquiring a new form or expression of matter - Chandamsi

3. The pancha-prAna devi is present in all levels of complex expressions (chandAmsi),  from Quantum (Rk), Classical (Yajus), Biological (sAma) and man-made (Atharvana). In biological beings (sAma) she is present as five organ systems (pancha prAna) that does creation, sustenance and destruction. She is established through this procedure of prAna prathisthA.


Defining the Seed, Action and Support

The procedure itself starts with invoking the three 'antaH-karana', the three internal instruments in every thermodynamic matter and biological system.

In Thermodynamic parlance, potential is seed. Kinetic is the action. Entropy is the central support that connects potential to Kinetic.

In biological parlance, seed is the organ that originated first. Hri are those that execute some important actions. Kro is those that connect the Seed organs and action executing organs.

The very first function that we deliver or deposit to idol are the signaling systems which is the basic necessity of life.

Life and Matter differ in that, that life has signaling. Matter has no signaling.

But how does our hand denote the signaling..? Why are hands used to deposit the Signaling onto the idol..?

Our palm, fingers and their lengths represent some of the pre-natal developments in our body.  An example is digit ratio of our hands.

A lower digit ratio, which means Ring finger is much longer than the Index finger. This indicates higher levels of testosterone exposure in the end of first trimester of pregnancy. That's why males have a lower digit ratio compared to females.

People with average or slightly lower digit ratio, with slightly excess testosterone levels also make good 'lovers'. This could be the reason why Ring finger is often associated with 'Love'. They myth of Vena amoris might have started from this mis-understanding.

In females, women with lower digit ratio tend to have more masculinity, due to higher levels of testosterone exposure.

The five types of signaling

There are five types of signaling in a human body. They are
The kara nyAsa procedure invokes these five signaling in the idol, through the five fingers and the palm that connects all of them.


The endocrine signaling is represented by the ratio of Index finger (Shakti) to Ring finger (Seed). If  'Seed/Ring' finger is longer, the person has higher levels of testosterone.

With Thumb, Index finger and Middle finger, With Ring finger, little finger and Palm, we deposit/deliver/invoke the signaling system in the idol.

The Signaling system is the first system to be established in any biological being.

The Integumentary system/Skin (Kavasa), the triple metabolic function of Respiration/Digestion/Excretion (tri-netra) and locomotor or musculoskeltal system that helps in movements (astra) are then established in the idol.

Let all the bhu, bhuva, Svar and all the directions be bound to this (idol/mUrthi).

Situated in Circulatory system, becomes visible in the excretory system,  Seated in the digestive fire, born in the respiratory system, ascending on top of the central nervous system

pAsam - pAsam means the binding one. Internal energy is one that binds and makes a system in the thermodynamic potentials
.
kodanda  is bow. Bow represents the Work done Energy, which is pressure * volume. Bow works by applying pressure, expanding volume, which is the work done to release the arrow.

mikS udbhava gunam - Generating/Sprouting from a mixture - This is the Gibbs free energy that sprouts from mixture of chemical reactions.

bibhraNa asrk  kapAlam - Holder of bloody skull -  Skull or Skeleton is the energy that cannot be used. It is the unavailable energy.

The devi glowing as a young light before the sun (Devi Bala arka varna), Pleasant doer (sukha kari), the prAna sakthi the best in us (prAna sakthi parA nah)

pancha-prAna devi is young light before the sun. She is the seed of the fire rather than the fire itself. She is the pleasant doer. That prAna sakthi is the best of all things we possess. She has the five energy potentials as her weapons. She exists in five biological functions. She does Creation, Sustenance and Destruction. She nourishes all matter and beings.

There are 10 Indriyas or sense organs which are denoted by yam, rum, lum, Zam, Sham, Sam, Ham, Lum, Ksam.

'Aham Sah - Sah Aham', means the 'Self' in me, let it become that in the Idol. We are invoking our 'self'  in the idol and making it a mUrti.

What was an idol now has become mUrthi with life. An idol is just made of a material. A mUrthi is supposed to have 'life'  due to prAna prathistha. To this mUrthi we offer flowers and water.

(saying it we offer flowers and water to the mUrthi).

Return us our prAna, oh prudent one, return our sight, our prAna our body of enjoyment; Long may we see the Sun's beginning and end, allowing auspiciousness and favors to us.

The above is from Rk veda Mandala 10 Hymn 59 Verse 6. We recite it asking for our prAna to be returned us with favors for body of enjoyment from the mUrthi.

We invoked in the idol our 'Self', our 'Indriyas', our 'organ systems', our 'pancha-prAna'. The idol has become mUrthi and come to life.

Now we are asking the Self, Indriyas, Organ systems to be returned to us, as the mUrti has become all powerful.