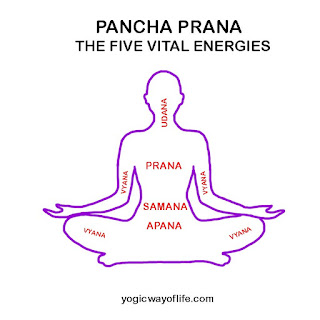 Before I move on to the slokas of Samkhy kArika and the summary, here is a brief explanation of the vrttis (energy vortices) of matter and organ systems of beings.

Matter at the very basic is energy manifesting in different force-fields.

Evolution of matter, which are non-living entities are based on five principles.

At the very basic, a non-living entity or matter is particles manifesting in quantum force-fields (such as dirac-fermi field). This is called zero-point energy. This is Ananda. This is equivalent to the ‘signaling’ of life. This Ananda is equivalent to udAna in biological beings.

When a non-living entity using electric fields establishes chemical reactions with other entities, excess energy (called gibbs energy) becomes available,  which is used in evolving more complex matter forms (such as organic and inorganic compounds, mixtures).  This utilizing excess or available energy derived from chemical reactions with other entities is utsarga. This utsarga is equivalent to samAna in biological beings.

When entities react with each other and form complex matter forms using chemical reactions, it leaves out some energy that cannot be utilized at all. This unavailable energy that are left off from the entity is adAna. This adAna is equivalent to apAna in biological beings.

This extremely virtual could be our knowledge gap, but yet without this ‘binding’  one can’t explain how this is being driven. We can take At-manas as the ‘nature’ of things.

This ‘At-manas’ is the ‘Supreme Will’ and it is ‘Extremely virtual’.

The systems and processes by which this electric signaling is established  is udAna.

The systems and processes by which such chemical reactions like oxidation are established are the prAna.

The systems and processes by which other entities(living and non-living) are utilized for growth is samAna.

When energy is generated in a living entity, using pressure and volume differentials, it is distributed/circulated to all parts of the entity, so that all parts of an entity utilize the energy generated.

The systems and processes by which physical circulation of energy happens to all parts of the entity is vyAna.

The systems and processes by which this removal happens is apAna.
Life evolution sustains on these five principles of udAna, prAna, samAna, vyAna, udAna which processes the pancha-bhutas.

But below all these is ‘Manas’.  What drives the ‘electric signaling’ to happen between organs..?  There is something ‘virtual’, which do not obey the laws of the universe, that is ‘off-the-shell’ in quantum mechanics parlance .  This virtual binds organs of every living being and makes them a cohesive entity.

This virtual could be our knowledge gap, but yet without this ‘binding’  one can’t explain how electric signaling takes root between compounds, how it is driven to evolve further. We can  take manas as the ‘nature’ of beings.