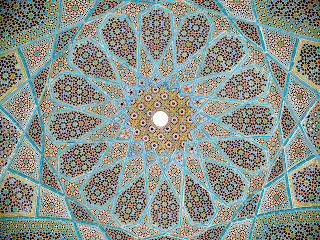 The other six Rudras are Higgs scalar field, Unified dark-matter and higgs field,  Dark Matter field, Dirac-fermi field,  Dark-Energy scalar field and the field of fifth dimension of space which I call as Quantum Entanglement field.

How do we understand the dark-matter and higgs field better..?

That leads us to saMkhya who talks of Purusha (Unified dark matter and higgs) and Prakrti (matter). In the next several blogs, let me go through saMkhya kArika of Isvara krishna  with tattva kaumudi of Vacaspati Misra.

Let me go through saMkhya as a design pattern first, then summary of the kArika and each and every sloka in the kArika

A short summary of the design pattern

saMkhya describes the evolution of Universal matter, biological beings with 24 principles. They are

3. Five organs of Change in Enthalpy/Work (Karma Indriya) in Universal matter as well as biological beings

4. Manas or At-manas (these are 'virtual') which 'binds' these organs of entropy and change in enthalpy in Universal matter as well as biological beings.

7. Entropy, Change in Enthalpy and Negentropy acting on the pancha-bhutas and in biological beings drive all the evolution.

8. These 24 (3 gunas (entropy, change in enthalpy, negentropy), 5 entropy organs, 5 work/change in enthalpy organs, 5 measures that differentiate energy/cell types, 5 forms of matter/organ systems and 1 Manas/At-manas which is virtual and binds all of them) are the design pattern principles of saMkhya.

The above verse illustrates what is Sankhya.

In essence, saMkhya, which is ‘knowing the whole’ declares that there are 24 principles around anything that does/performs and on which something is done.

The design pattern of Universe and human beings are explained by this 24 principles.

1.      Universe and human beings are made of eleven indriyanis (organs), five vrttis/tanmAtras (which are five energy vortices that get differentiated due to five measures)  from which arises the five bhutas (matter). These 21 (11 organs, 5 tanmAtras and 5 bhutas/matter forms) are controlled by the three gunas of Sattva, Rajas and Tamas.  These 24 make up the design principle of saMkhya.

5.                  All Universal matter and biological beings are supposed to be bound by the Manas (virtual) or At-manas (extremely virtual), under whose guidance the evolution takes place. This manas or Atmanas is the first principle of saMkhya’s design pattern.

d.                  All matter in the Universe and biological beings are subjected to this Entropy, Change in Enthalpy (work done) and negentropy.

7.                  These three principles of Entropy, Change in Enthalpy/Work done and negEntropy operate on all Universal matter and biological beings and guide the evolution.

14.              The joint entropy measures adding up of uncertainty/information in systems which can be added/processed together.

21.              The design principle of Karma, which is work done or change in enthalpy is based on five aspects.
1.      Physical movement of a body which is change in spatial position

2.      Spatial expansion  of a body, which is change in Pressure * volume

3.      Change in temperature of a body which is average kinetic energy

4.      Change in atomic/molecular binding energies due to electric charges

5.      Change in nuclear binding energy due to strong force

24.              Change in binding energy  from strong force that results in formation of different  atomic nucleus is a type of work done.

25.              Change in binding energy from charges that results in formation of different atoms and molecules is a type of work done.

27.              If Manas of a human being is surrounded by Organs of Buddhi (eyes, ears, nose, tongue, skin) and organs of Karma (hands, legs, reproduction/digestion, speech, excretion), then At-Manas of Universal matter is surrounded by organs of entropy (hadrons, nucleus, atoms, molecules, compounds) and organs of ‘work done’ (Gravitational work, Chemical work, Work due to strong force binding energy, work due to charges and thermal work).

35.              In biological beings with manas also, these five energy vortices exist.  They are called vyAna, apAna, prAna, samAna and udAna.

1.      When states of matter is in equilibrium, it means all part of matter are in the same information state (same phase).

2.      When in dis-equilibrium, matter may have different phases but going towards a single phase.

3.      When in non-equilibrium, matter has different phases and will continue to be same.

1.      When organs of biological beings are in equilibrium, they are functioning with all information. They are disease free.

2.      When organs of biological beings are in dis-equilibrium,  it means they are not functioning with full information, but they are going towards full information. They are having a dosha, imbalance and recovering.

3.      When organs of biological beings are in non-equilibrium, it means they are functioning with incomplete information and continue in that state, they are having a roga, diseased and performing degraded.

1.      vAta dosha (gas, vAyu) means imbalance in the body that affects the functioning of lungs/respiratory system with incomplete information.

4.      Any imbalance in body when it affects one or more of these three systems (hearts, lungs, kidneys) it means body is diseased.

5.      Any ailment in the body actually affects one of these three to stop the functioning of the body.

7.      The only two partly voluntary systems are the digestive system  (food and medicines) and central nervous system (good thoughts).  With these two systems one can intervene and remove the non-equilibrium state of other organ systems.

Next: Summary of saMkhya kArika