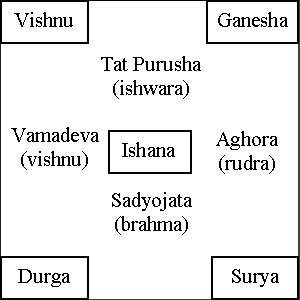 There are eleven Rudras (force-fields) that manifest at different points of time, in the four-dimensional expanded spacetime (post cosmic inflation epoch), which is called the 'Brahma'.

Note that Gravity is not a force-field in all of the above. It is only a space-time warping manifestation. Brahma the expanded spacetime post cosmic inflation epoch, getting impacted by force-fields is felt as ‘Gravity’. Hence Brahma is also Gravity.

In this Brahma manifests the Rudras. But Brahma (Gravity) is not a Rudra (force-field) at all.

Of these the five rudras that are color coded are the Pancha Brahma Rudras. The Pancha-Brahma mantras are in Taittiriya Aranyaka (X.17-21) of the Krsna Yajurveda. The tenth chapter is called the Mahanarayan Upanishad. Therefore, these mantras can also be said to belong to the Mahanarayana Upanishad.

In the last blog, I wrote about SadyojAta, iSAna and Tatpurusa from the pancha brahma mantras and pancha brahma upanishad. Let’s see about Aghora and vAmadeva in this post.

Aghora is Nilalohita, the red-blue or purple or magenta, the Weak force.

The Weak force decays all particles of Dirac-Fermi field. It destroys all the matter that is present in the Universe. It is the destroyer.

Aghora is opposite of intense or being fierce. Aghora rudra is the force-fields that decays, destroys whatever is intense/dense, decays it into its components.

Agni is 'interaction' or 'tranfser of energy'. Hence it is mapped to fire.  Aghora simply is the blue-red destroying/decaying interaction, which is the Weak force.

Weak force destroys the states of matter (desired creations) while preserving the momentum/energy. It is a combination of fifty components.

The pancha Brahma mantra for aghora is

The astras of Aghora, the weak force field, destroys the expressions that are bounded by the strong force, which vibrating again and again with intensity cross into various forms that cover.

In short, whatever vAma produces Aghora destroys or decays them.

vAma is left. In writing convention we start with left. Hence what comes first is placed in left. In the Unified Electro-weak-strong force, the first force to separate is Strong force. Hence it is the left-most of the force. Hence vAma is also left.

The pancha brahma mantra for vamadeva is

Salutations to vamadeva; the eldest (jyeshta); the best (sreshta); of the force-field (rudra); who is subjected to kAlA (quantum entanglement); who makes/changes (vikarana) it indistinct (kala); the strength (bala); changes the strength (bala - vikarana), agitates/churns that strength, subduer (damana) of all matter particles (sarva bhuta); exciter (unmana) of the ‘heart’ (mana) of all beings

The strong force-field (vAmadeva) is the Eldest of the Strong-electroweak force-field to be born. Strong force field separates out first and hence jyestha.

It is the best (sreshta) of the force-fields that is the cause of most ‘mass’ of the Universe, as most mass in Universe comes from nucleus of atoms, which is caused by strong force-field.

The particles subject to strong force-field (Quarks) are subjected to force-field that causes Quantum Entanglement (kAla), that plucks out fifth head of brahma, that shortens the fifth dimension. (my theory)

Quarks (of Dirac-Fermi field) are supposed to have three charges. For convenience they are given color names. Red, Blue and Green. The gluons of strong force-field connect the quarks of different colors. Thus gluons are visualized as having 2 color charges. Red-Blue, Red-Green, Red-Red etc. that enables them to connect to quarks of different colors

Standard model postulates ‘eight’ gluons (though nine combinations are possible with 3 colors only eight gluons exist). These eight gluons are the ones that are mediating strong force.

Three quarks of three different colors (Red, Blue, Green) combine and form a color neutral combination. This is a baryon. This baryon can be a proton or neutron dependent of the type of the quark.

The two baryons proton and neutron combine and form the nucleus.

This is captured in the Pancha-brahma upansihad’s description of vAmadeva Rudra.

The strong force-field surpasses over all the ‘dusta’, binding the agitating quarks into baryons, causing all the wealth of universe. It communicates great knowledge of purified nature.

Strong force binds the agitating quarks into baryons, and then binds baryons into nucleus. The baryons (valence quarks) are surrounded by a lot of ‘dusta’, the sea-quarks, which are called ‘vrtra’. The strong force is able to surpass all of them and creates wealth of matter for the universe.

It communicates a great knowledge for us. That if we surpass the surrounding difficulties or dustas, we will create wealth.

Equal joining of the ‘learning world’ (the world of quarks that learn the strong force); equals the splendor of crores of nucleus (bhanu); fully endowed (samanvitam) with variety (nAna) of the ‘eight-parted’ (astaka).

The steady strong force vibrations brings up the best possible. The wisdom of digesting, by joining together, endows with two powerful ones. The protons and neutrons are the two powerful ones that come up in the core of nucleus due to the steady strong force -field. They are formed by digesting, by joining together of quarks.
varṇaṃ śuklaṃ tamomiśraṃ pūrṇabodhakaraṃ svayam
dhāmatrayaniyantāraṃ dhāmatrayasamanvitam

White colored, blended with tamas (opposite of sattva, rajas), in itself is the complete awakener. Restrained in the three abodes, fully endowed with such three abodes restrained ones.

The two powerful ones (proton and neutron) are formed when strong force-field gets restrained in three abodes (three quarks). Such three abodes matter (protons and neutrons) fill up the nucleus.

The two powerful ones (proton and neutron) are white colored or do not possess any color (neutral charged).

(Strong force-field/vAmadeva) gives (dam) all wealth (sarva saubhAgya) of real particles (nRnam) (which are) (as a) result of all its actions (sarva karma phala pradam); Eight indivisible aksaras join together; eight leaves are situated internally.

The wealth of real particles available in the Universe is given by vAmadeva rudra or strong force-field as a result of its actions (on other fields). Eight indivisible aksaras, eight leaves situated internally mediate the joining of these particles.

Let's discuss the directions of these rudras in the next post..