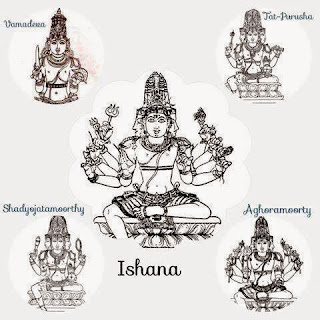 A spatial dimension is bumped off by field that causes Quantum Entanglement (kapardin/kAla rudra).

These together make eleven rudras.

These five rudras that are color coded are described in Pancha Brahma Upanishad and Mantras.

Brahma is expanded spacetime. The color coded Pancha rudras (five force-fields) in the Brahma (the expanded spacetime) give rise to life and death of matter/beings. Hence these five rudras or force-fields are exalted as the utmost important pancha rudras in the pancha brahma mantras.
The Pancha-Brahma mantras are in Taittiriya Aranyaka (X.17-21) of the Krsna Yajurveda. The tenth chapter is called the Mahanarayan Upanishad. Therefore, these mantras can also be said to belong to the Mahanarayana Upanishad.

These five rudras or force-fields do the five functions in the Universe.

What sustains all matter forms is the ‘nucleus’ of atoms. Nucleus is formed by Strong force. This is sustenance. This is vAmadeva

All matter forms are decayed and dissolved by Weak force. This is dissolution. This is Aghora.

Tatpurusha is a compound of two different independent nouns. Life-giving Electromagnetic and decaying weak force are compounded into an Electro-weak force. This Electro-weak force conceals both Life and death giving force-fields in it. This is the ‘concealing’ grace talked about in Tat-purusha.

Isana is combination of Electromagnetic-weak-strong force field (Unified field).  When these forces split up and interact with  force-fields of matter (Dirac-fermi fields), it becomes the controller of all matter and life-forms.  This is the ‘revealing’ grace.

‘Gayatri’ mantras have a particular format and repeat the same format for all divinities.

‘Vid’ is knowing or knowledge. Vidmahe is the great knowledge or some thing that is great to have knowledge of.

We discover great knowledge (vidmahe) through great thoughts (dhimahi). This is the process of ‘self-inspiring’ or ‘self-driving’ (pracodayat).

Knowledge is gross, sthula, the subject to be uncovered. Hence vidmahe. Thought is feminine, an internal property and hence dhimahi.

How do we uncover knowledge of great things..? With great thoughts. This process is pracodayat a self-inspiring, self-driving process.

Hence the ‘mantras’ that sings (gaya) about these three, great knowledge, great thoughts and self-inspiring are called gayatri.

All Gayatri mantras talk about some knowledge that has to be un-covered and tell us what we need to think about to discover that knowledge and be self-inspired about it.

The case in point is Rudra-Gayatri which talks about uncovering the knowledge about TatPurusha, the Electro-weak force.

iSana is the combination of Electro-weak-strong force field.

Virupa-aksha Rudra is of the form when Electro-weak-strong force originates as a single force.

This unified force-field splits into the three components over a period. These three force-fields interact with dirac-fermi fields (bhava Rudra or Tryambaka rudra which we will see later), originate matter and beings that evolve.  These become the controller of all matter and beings in the Universe. That controller form is iSAna.

virupa-aksha is White in color as it is the combination of three force-fields, while iSAna is colorless after the force-field has split into three.

Since Unified field is from which the Electro-weak, Weak, Strong, Electromagnetic force field descends, it is placed on top of the four force-fields (faces).

This Unified field is the 'umanifested ether' because it never manifests as it is. It is beyond the vibrations (svaras) of Electromagnetic field, Weak field and strong force-field that manifest in the universe.

In the Pancha Brahma Upanishad, isAna Electro-weak-strong force-field) is described as the Supreme Ruler and the witness of the intelligence.

Pancha Brahma Upanishad says, "matter (devas) do not realize this Unified field (as it gets split by the time matter dawns in the Universe) in that Unified form. This iSAna is the supreme 'abode' of all the force-fields."

It further says  "The five (force-fields/rudras) are, as it were, the division of one Brahman. Thus understanding the one as five he reaches Isana (the fifth).". Thus iSAna is the one force-field from which all other four derive.

The Upanishad also describes Isana, the unified Electro-weak-strong force-field as the cause of the pancha krityas (five functions) in the great form of the five Brahma rudras.


The pancha brahma mantra for Isana is

Isana is the lord (adipati) of the expanded spacetime (brahma) and its expansion (brahman). Spacetime expands. The expansion of spacetime is lorded over by Isana.

Isana (Electro-weak-strong force field) is how energy (siva) manifests (astu) in spacetime (brahma), he (sah) certainly (eva) is the one always in the form of energy (sadA-siva) in the AUM.

Tatpurusha (a compound of two indepenndent nouns) is a ‘compound’ of Electromagnetic and weak forces. It is the Electroweak force. Electro-weak force is vilohita and deep red in color.

In modern ‘Lagrangian’ physics, where motion of a system is described in terms of its energies, more precisely as difference between its kinetic energies and potential energies, the Electro-weak force’s motion can be said to have ‘eight’ parts, after Higgs boson acquires a vacuum expectation value. These eight parts capture all parts of electro-weak interaction, the way energies in the field are distributed over its interactions with other field (Fermions, fermions-electric charges, fermions-weak isospin, Higgs, Higgs-gauge vector interactions, gauge three point, four point interactions, fermions-Higgs) and thus describe its state of motion.

The components of this Lagrangian equation part of these eight parts, when put together could expand to fifty or a number closer to that (which I am not sure). Post symmetry breaking, five force-fields viz., Electromagnetic, weak, fermi, strong and Higgs field gets established in their current form.

All the ‘Ganas’ of sets of force-field interactions which build on each other forming particles, atoms, elements, compounds are led by the breaking of this force-field. Hence this force-field is the ‘cause’ of creation (of matter and living beings), preservation (building of more and more complex beings) and destruction (annihilation and decay of matter).

This field existed before/beyond the electromagnetic field that we perceive now, that plays a role in our consciousness. This force-field impacted Spacetime, Higgs and a lot of other force-field as could be seen its eight part equations at that time.

The pancha brahma upanishad described Tatpurusha as “Tatpurusha is with eight letters (Aa, Ka, Cha, Ta, Tha, Pa, Ya, Sa) and is in the eight petal lotus and is normally surrounded by air, the five fires, who is the leader of the energies, and who has the fifty letters and their notes, and Atharvaveda. He is the head of crores of the Ganas (Elements) and whose body is the whole universe. His color is Red-which gives the desired objects. He is the panacea for all kinds of diseases, the cause of the creation, preservation and destruction &c., and the possessor of all the energies. He is above the three states of consciousness, the fourth (Turiya), and existence, consciousness and bliss himself, He is worshipped by Brahma, Vishnu and others, and the Supreme Father of all”

The above explanation can be only understood if we have the understanding of how electroweak interaction happens and in no other way. When it cannot be explained, it gets into ‘spiritual’ mode where people start creating their own explanations and philosophies.

How do we uncover the knowledge about Tatpurusha, the Electro-weak force..?

Sadyo-jAta means that is just born. It is used to indicate a just born calf. The just born force-field is the Electromagnetic field in the Standard Model.

Obviously Electromagnetic force-field in earth is Yellow in color (Pingala Rudra). It is the creative power (kriyasakthi). It is said to have seven notes (seven visible color bands). It is Pusha (the Heat). It is the cause of Lakshmi (the materials of the dirac-fermi field). It is the Garhapatya fire or the fire that cooks and nourishes beings.

We salute the Electromagnetic force-field, which causes the evolution of Bhava Rudra and makes it bhavod-bhava Rudra.

The Upanishad starts with

“Next Pippalada asked Bhagavan ‘What is That which came to be born below all’? (kim Adhau ki jAtam iti) (He replied). Sadyojata”

Most translations translate ‘Kim Adhau jAtam iti’ as which was born at first. But that is not what pippalada is asking. He is asking ‘kim Adhau ki jAtam iti’. Which was born below all..?

Sadyo-jAta, the just born Electromagnetic field is born below all. It was born actually the last of all the force-fields.

-To be continued in part 2