Aditya Hrdayam Again Part 46 - Nothing other than Rudras.. 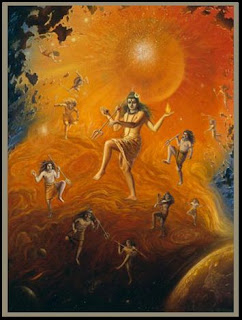 What we call as vacuum is actually absence of particles as we know them. But Brahma (our expanded spacetime) is teeming with energy of different force-fields, according to science. These force-fields have energy and it is called ‘vacuum energy’. When vacuum energy crosses a threshold particles and antiparticles manifest.

The cosmological constant (the vacuum energy density) that is generally believed to be the reason for expansion of spacetime (as computed by Einstein) and is derived from cosmological observations based on spacetime expansion, is relatively smaller value, by 100’s of times.

This is a paradox. I had explained this in the last several posts.

Rudra the force-fields manifest on Brahma

But if we understand the Vedic mapping of these forces, this can be explained. We have to understand how Rudras are depicted in the Vedas, their relationship with Brahma.

It means “Everything is Rudra. The Purusha (Dark matter) is a Rudra. All (visible) matter and beings of the Universe, which are born in large numbers are all Rudra”

Everything in this Universe from Dark Matter to matter and beings that are born are all force-fields (rudra).

Shiva and Vishnu manifest in the Rudras

There are eleven Rudras that manifest in this Universe at different points of time. In these eleven rudras, physical properties of Shiva (Energy) and Vishnu (mass) manifest.

Since Shiva and Vishnu describe the ‘Sthula’ (gross/physical) properties of force-fields, they are masculine.

Since Shakti and Lakshmi describe the ‘Sukshma’ or internal property of force-fields they are feminine.

The physical property of ‘energy’ similarly appears in eight force-fields. The energy in the force-fields not only interacts with other force-fields but also impacts the very spacetime in which they manifest.

They can bump-off a dimension of spacetime or expand it. Thus, rudras though they manifest in the Brahma (expanded spacetime), can control or destroy the Brahma. Indeed a Rudra bumped off the fifth head of Brahma. This is how the elusive the ‘fifth’ dimension got shortened.

More on the ‘fifth’ dimension/ fifth head of Brahma, that leads to Quantum Entanglement (in my proposition) in subsequent blogs.

Let’s understand these Eleven Rudras or eleven force-fields and how Shiva and Vishnu manifest in these rudras..

Shiva (Energy), the physical property of force-fields, manifests in two forms in all matter. Hence he is said to have two children. One is potential, which is called Ganapati. Another is kinetic, which is called Skanda.

Skanda is the one that hops/effuses/moves out. It is the kinetic form of Shiva or Energy.

Summary of how the paradox is addressed

A top-level quick summary that this model of Rudras (force-fields) and Brahma (expanded spacetime) offers in solving the paradox of large vacuum energy value and small cosmological constant value is this.

The vacuum energy density is the ‘potential’ energy present in the eight force-fields or eight Rudras that manifest at different points of time.. It is obviously large. The cosmological constant is the energy density of one particular force-field, which is the quintessence force-field, or which I call nRRti Rudra, the Rudra of Dark Energy, that keeps expanding the Spacetime.

Thus from this Vedic mapping view, what causes the expansion of spacetime is nRRti Rudra, the force-field of Dark Energy whose energy density is way way smaller than the vacuum energy density that is measured across several force-fields of the Universe.

Current models propose vacuum energy as the ‘reason’ for spacetime expansion. But from the vedic reading I think dark energy is a field that expands the spacetime. There are seven other fields (that manifested at different points of time), the energy of all these fields summed up becomes the vacuum energy as measured in quantum physics.

The next question then is why is nRRti Rudra accelerating the spacetime expansion now..? What is the rate at which it is expanding, what is the end point of this expansion..? Understanding nRRti will answer it. More on it also subsequently..

The names of Eleven Rudras have not been common across puranas. Though there overlaps, there are also different names of Rudras in different puranas.

Let me explain these eleven in the next post.
-TBT