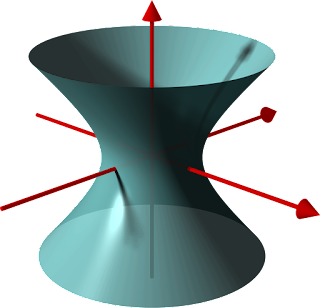 Shiva Linga is actually a Hyperboloid on which the real particles of the universe lie
De-mystifying Shiva
For us now, Shiva is a god with trishul, trinetra, snake around his neck, in loin clotes, with matted hair. For some he roams in cemetries. For some he is a mad man. And a modern construct that sells is 'Shiva is Adi Yogi'.
For 'scholars' Shiva is a Puranic god who has acquired prominence post vedic period. Shiva acquired further prominence in South in the early centuries after Christ. Shiva is an epithet of Rudra. Shiva is not widely talked about in Vedas.
For 'linguists' who try to 'interpret' or translate vedic scriptures, Shiva could mean auspicious, benefic, gracious and 'in whom all things lie'.
Who is Shiva..?
In my understanding of Rg Vedic slokas where Shiva is talked about, Shiva is Energy. Shiva is Energy and Vishnu is Mass. Shi (lie down) va (in which) which means in which all things lie or 'at rest' is Energy.
Shiva is Energy, Rudra are vibrations or force-fields. Ru-dra means 'howler', one that howls, makes noise, vibrates.  Force-fields (Rudra) are vibrations/pulsations of energy.
There are eleven Rudras or eleven force-field vibrations which are pulsating with energy in the Universe's vacuum. All the matter in the Universe from photons, quarks, leptons, gluons are manifestations of these force-fields when the energy crosses a threshold.
Science says there is a vacuum energy or zero point energy in the different force-fields that exist in empty space, which keeps vibrating and when it crosses a threshold it manifests virtual particle-antiparticle pairs in every force-field. Most of the times these 'virtual' particle-antiparticle pairs of the force-fields annihilate and become energy again. While this keeps going on, under some conditions, these 'virtual' particle-antiparticle pairs of the force-fields become the 'real' particle-antiparticle' pairs that interact with other thereby bringing up birth of matter in the Universe.
Simplistically put, matter particles pop out of seemingly empty space or vacuum as vacuum is filled with energy. Thus all matter particles 'lie' in this energy. Hence energy is called 'Zi-Va' in which (all things) lie.
There is no duality
Vedas say 'eko hi Rudra na dvitiyaya'. There is only Rudra and there is nothing second. 'Sarvo vai Rudrastamai'. Everything here is Rudra. Though on surface there seems to be a matter-energy or wave-particle or paramatma-jeevatma duality, that duality is only in the manifestation.
Ultimately it is all energy only. Matter pops out of energy and goes back to it.  Particle pops out of a wave and goes back to it. Jeevatma pops out of paramatma and goes back to it.
The duality is only a matter of 'observation'. At the deepest levels, it is all uncertain. It is probabilistic. A wave, energy or paramatma nature is this nature of uncertainty and being probabilistic. A particle, matter or jeevatma nature the nature of certainty and deterministic. This probabilistic-deterministic nature is the fundamental basis of duality.
Science says the deterministic nature arises from being 'observed'. It is our observation that drives to make it deterministic. For eg. we toss a coin. Let's say the coin spins in the air. Head and tail keeps changing as the coin moves through. For a moment, let's say we stop the spinning coin in the air and observe the coin. We get a deterministic head or tail due to our observation. But the moment we withdraw our observation the coin keeps spinning again, till the time it rests on the ground.
So the original and only nature is probabilistic. But it 'appears' deterministic due to our 'observation'. Thus the duality is a matter of observation. (which seers described as mAya or magic of our observation).
Shiva and Linga
Shiva is Energy. Shakti is Momentum. Energy and Momentum are inseparable. They are always together. Yet they related by an equation

This relationship can be depicted graphically as a hyperboloid or a 'Linga'.

Those particles that satisfy this energy-momentum relationship are said to be 'real' particles or 'Nara'.  They are said to lie on the 'Linga' (on-shell). Their speed is limited to velocity of light. They obey the laws of the Universe.
Those particles that do not satisfy the energy-momentum relationship are said to be 'virtual' particles or 'Manas'. They are said to lie outside or off the 'linga' (off-the-shell). They travel faster than light. They do not obey the laws of the Universe.
The one that originates this energy and momentum is said to be 'At-manas' or Extremely Virtual. It is extremely off the shell (outside the linga) and does not obey the laws of the Universe. That is called 'Atma'.
Shiva and Vishnu
In my blog on Vedic studies, I talk about quintessence model in which a 'scalar' field explains the 'dark energy' that expands the Universe. I offer a bit of variation in it.
In my understanding, Shiva and Vishnu are two scalar fields. Vishnu is the Scalar Higgs field with whom if other fields/particles interact they acquire the property of 'mass'.  Shiva is another Scalar field, but which not only explains dark energy that expands the Universe, but, much like Higgs field, is also the cause of 'energy' in all other fields.
In other words the different Rudras (force-fields) acquire their 'energy' from interacting with this scalar field. I called this quintessence scalar field as 'nRRti Rudra'. This means Electromagnetic field, strong force-field, Weak force field, Dirac-fermi fields interact with this scalar field and acquire their energy from this field. This is how the vaccum energy is obtained in these fields. These fields also interact with Higgs field and acquire their mass.
Science says the Universe's spacetime (which I map as Hiranyagarbha) expanded hugely in the inflation epoch, in the first seconds of Big Bang, afterwhich it stabilized.  I propose in the blog series that this expansion was driven by the Higgs scalar field (Birth of Hiranyagarbha from Vishnu's navel).
Science says that Universe's expansion now seems to be accelerating. I propose in the blog series that this expansion acceleration is due to nRRti Rudra, the scalar field that provided energy in the first place, is now taking the Universe to its destruction (nRRti is the destroyer).
Who is a Yogi..?
Yogi comes from the word 'Yuj' which means union or joining. Yogi is one whose body and mind are in perfect Union. It means the body is able to control the mind and mind is able to control the body.
To become a true Yogi, patanjali prescribes eight steps. They are Yama, Niyama, Asana,Pranayama, Prayahara, Dharana,Dhyana and Samadhi. Samadhi is the state in which the absolute control can be exercised. You can read more in this blog about these Yoga Sutras.
Adhi Yogi is one who was in complete Union at the very beginning.
Is Shiva, the Energy, an Adhi Yogi..?
Science says at the origins of Universe, just after the Big-Bang and before the inflation (when spacetime expanded), all the force-fields were in Union. There was One United force-field. Then this United force split into Strong and Electro-weak force. The inflation or spacetime expansion occured post this split.
Then Electro-weak force split into Electromagnetic and weak force split. Then Higgs field acquired what is called a 'Vacuum expectation value' resulting in mass. The Electric and Magnetic fields we observe are actually part of the Electromagnetic force.
Puranas say, in Brahma (spacetime) the Rudras (vibrations of energy or force-fields) originated. Rudras are sons of Shiva (Energy) but they manifest in Brahma (spacetime). Puranas say Brahma kept producing these Rudras in the hope of furthering the evolution (progression of Universe).
In this way, Shiva, the Unified Energy or Unified force field at the origins of Universe is the Adhi Yogi, the first one to be in complete Union at the beginning of Universe.
What does Maha Shiva-Ratri signify..?
If we assume an year is equivalent to a day, the first day of month Chaitra (Chittirai) symbolizes the time of dawn (say approx 6 am),  then the Shiva-Ratri that appears in the month of Magha (in tamil maasi) is equivalent to time of 2 am and is the start of Jiva-Amrta Muhurat. This is called a very auspicious muhurat.
Jiva-Amrta means nectar of life. Nectar in which all beings thrive is Energy. Jiva-Amrta Muhurat corresponds to Shiva or Energy.  2:48 to 3:36 is Vishnu Muhurat corresponding to Vishnu or Mass. These Muhurats correspond to the month of Magha.
3:36 to 4:24 is Dyumadgadyuti muhurat corresponding to Radiation/Light. This corresponds to the transition between Magha and Phalguni.
4:24 to 5:12 is Brahma Muhurat corresponding to Brahma/Spacetime expansion. 5:12 to 6 is Samudra muhurat corresponding to the Universe filled with various types of matter and beigs. These Muhurats correspond to the month of Phalguni.
Of these Muhurats, the JivAmrta muhurat (2 am to 2:48 am) corresponding to Shiva or Energy and Maha-Shivaratri is celebrated to mark this Muhurat.
Phalguni Uttiram is celebrated in Phalguni month and that symbolizes the Brahma Muhurta which is between 4:24 and 5:12. Brahma Muhurta symbolizes expansion (of spacetime). Shiva (Energy) and Shakti (Momentum) are said to be in Union (married) in this Muhurat.
Similarly Pitr-Paksha and Navaratri time symbolize the dusk-times of 18:00 o 18:48, 18:48 to 19:36. These are times of 'Sandhi' and hence worship of ancestors and Devis are performed in these duration.
Being awake during Maha-Shivaratri..
The practice of being awake during Maha Shivaratri night could have got started to symbolize the Jiva-Amrta Muhurat (2 am) and the understanding that it how somehow symbolises energy that all living beings sustain on.
-TBT