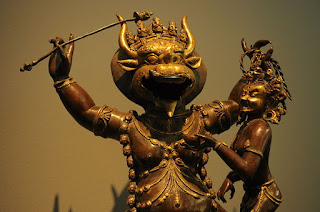 This series is an attempt to interpret the Vedic slokas in a framework of quantum physics. The underlying understanding is that the Rg Vedic slokas actually explain the cosmic events of the early Universe.

Energy is Shiva. Momentum is shakti. Energy and Momentum are the Ardha-nareeswara as they can never be separated.  Those that satisfy the energy-momentum relationship lie on the ‘Linga’ or ellipsoid and are called ‘real’ particles or ‘Nara’. Those that do not satisfy are virtual particles and called ‘Manas’.

Soma is the strong force. Pavamana is the filtered strong force or nuclear force. Indra are baryons (three quarked). Varna are mesons (half-deva, half-asura). Mitra are quark-pairs. Rudra are vibrations of force-fields.

We also saw Soma, the strong force mediated by gluons is the cause of all reflected luminosity as gluon field reflects photons and hence called Chandra.

Hiranyagarbha is spacetime. Hiranyagarbha/spacetime bends to Energy/Shiva thereby altering the path of Energy(Shiva). hus Shiva/Energy dances on the spacetime. This bending of Hiranyagarbha or spacetime manifests as a ‘gravitational pull’ or ‘Brahma’.  Thus  Brahma is gravity.

Shakti (Momentum) manifests as ‘mAyA’ or rest-mass.  Vishnu is the property of mass caused by Higgs mechanism.  Mass caused through the Higgs mechanism also bends the spacetime. That is, Hiranyagarbha bends to Vishnu also.

The gravitational pull is caused by the impact of these mass through Higgs(vishnu) or energy (shiva) on the spacetime (Hiranyagarbha). Thus Vishnu (Mass through Higgs) or Shiva (Energy) are equivalent.

ekapAda are those elementary bosons that are their own antiparticle (like Mass/Vishnu caused by Higgs Boson, Energy/Shiva mediated by gluon, Momentum/Shakti mediated by photon).

dvipAda are those that have distinct particle and anti-particles (like Quarks and Leptons).

catuspAda are those that are four component force fields  that existed in the early Universe (dyu-loka) that did not have mass (Dirac-spinor fields called the UkSana,

Soma is strong force. It integrates and evolves matter.

Madhu is electro-weak force (before Electro-weak symmetry breaking). It divides and decays matter.

Kuvera is the gluon condensate or color flux tube that keeps producing quark and anti-quark pairs from the energy of Shiva.

Suras are those that 'distil' and evolve in the soma or strong force. Those that can distil in Soma or Strong force, according to science, are Quarks and anti-Quarks. Quarks and Anti-quarks get to drink 'Soma'. They also drink 'Madhu', the electro-weak force in the sense they get divided and decayed by weak force.

Asuras are those that do not evolve in  strong force. They are leptons. Asuras do not get to drink 'Soma'. They only 'drink' madhu or electro-weak force or only subjected to weak force.

Adityas are those that are born into Aditi which means they don't divide, but rather integrate and evolve. They are the lighter quarks that integrate and form different nucleons like baryons (Indra), mesons (Varuna, half-deva, half-asura or Quark and Anti-quarks) and Quark pairs (Mitra).

Danava are those that are born in the form of 'danu' or 'drops' (dew). They are the lighter leptons like electron, positron etc that are stabler compared to heavier leptons.

The Adityas are subject to (they drink) both Soma (strong force) and Madhu (electro-weak force). But asuras and daityas, those that decay, decay due to (drinking of) electro-weak force (madhu) only.

In the above framework, Nrrti Rudra is the dark energy causing scalar field is the subject of this blog.

When Einstein tried to apply his General Theory of Relativity to the universe as a whole, he realized that space-time as a whole must be warped and curved back on itself, which in itself would cause matter to move, shrinking uncontrollably under its own gravity. Thus Einstein (and others) realized that the equations of general relativity did not describe a static universe. He posited a mysterious counteracting force of cosmic repulsion, which he called the “cosmological constant”, in order to maintain a stable, static universe.

In 1929,  Hubble concluded that the galaxies and clusters of galaxies were in fact flying apart from each other at great speed, and that the universe was expanding. In the face of Hubble’s evidence that Universe was not static but in motion, Einstein was forced to abandon his idea of a force of cosmic repulsion, calling it the “biggest blunder” he had ever made.

In the first split-seconds of the Big-Bang,  the Universe's spacetime fabric underwent an exponential expansion, driven by the vacuum energy of the empty space. This theory is called Cosmic Inflation and it has now become part of Big-Bang theory models.

The universe has continued to expand since the Big Bang, albeit at a slower rate since the period of inflation, while at the same time the gravity of all the matter in the universe is working to slow down and eventually reverse the expansion. Two main possibilities therefore present themselves: either the universe contains sufficient matter(known as the "critical mass") for its gravity to reverse the expansion, causing the universe to collapse back to what has become known as the “Big Crunch”, a kind of mirror image of the initial Big Bang; or it contains insufficient matter and it will go on expanding forever.

The cosmic inflation model hypothesizes an Omega of exactly 1. In that case, it will continue expanding, but gradually slowing down all the time, finally running out of steam only in the infinite future. For this to occur, though, the universe must contain exactly the critical mass of matter, which current calculations suggest should be about five atoms per cubic metre (equivalent to about 5 x 10-30 g/cm3).  Including all the matter in the universe, both visible and dark, only amounts to about a quarter of the required critical mass, suggesting a continuously expanding universe.

In 1998, two separate teams of astronomers observing distant type 1a supernovas made parallel discoveries,  suggesting that the universe’s expansion had actually speeded up since the stars exploded. Therefore, the expansion of the universe actually seems to be accelerating.

Some ‘dark energy’ seemed to be not just expanding the Universe (as with cosmic inflation),  but accelerating that expansion. As of 2013, based on cosmic microwave background radiation data from the Planck satellite, of the total mass of Universe, 68% comes from dark energy, 27% from dark matter and 5% is the visible matter.

Quintessence of Dark Energy - The fifth of Pancha-bhoota

If Vishnu is the ‘mass’ out of the Scalar Higgs-field present everywhere (as I am describing in this series),  then Siva also should be ‘Energy’ out of another Scalar-field. That Scalar field is called NRRti.  This is exactly what is described in the Quintessence (or more precisely K-Essence Model) of Dark Energy.

The assumption that the cosmological constant, that indicates energy density and has a very small value in Einstein’s general theory relativity could be the vacuum energy falters as the vacuum energy has a huge value.

This is where the quintessence model of dark energy comes in. Quintessence means the ‘The fifth element’.

The strong force, Weak, Electromagnetic and Higgs are the four forces.

Unlike current science, I have not mentioned Gravity (Brahma) but Higgs as one of the fundamental four. Dark energy is the fifth force and hence Quint-essence.

From 10-36 seconds of Big Bang to 10-32 seconds, the Universe exponentially expanded. It is called Inflationary epoch of Universe. The expansion of Universe slows down post this period.

From this time to 3 billion years after the Big Bang, the Universe was radiation dominated. Shortly after Big Bang the scalar field had huge Kinetic energy and low potential energy as there was very little matter.

I understand from the Vedic slokas there is a kinetic energy transfer or Agni from the scalar field to other fields causing the radiation energy density to increase.

Universe moves from dominance of Radiation to Matter

This Quintessence model could also lead us to the concept of Cyclic Universe as exactly described in Srimad Bhagavatham.

Before Quintessence Model, the expectation was Universe expansion would be slowing down continuously from the inflation epoch and would eventually stop. It will then reverse its course due to gravitational forces and start contracting. It will lead to a Big Crunch, leading to a singularity probably and then a Big Bang again..

But since we know that Universe expansion is not slowing down, but actually accelerating its expansion, the expectation is Big Crunch conditions won’t happen.

But that may not be true. The Big Crunch can still happen though the Universe is accelerating its expansion.

The future of Dark Energy, as I predict is not in dark energy expansion stopping at some point of time. Instead it is going to accelerate more and more as the Kinetic energy component of scalar field goes down and potential energy rises due to interaction with more matter.

But if I believe Bhagavatham, Hiranyagarbha or space-time is like a lotus from stem. Hence as dark energy drives matter away actually it is driving them back to the origination point, but in the forward direction, as spacetime is lotus-shaped.  Driven by dark energy, the matter will go through a Big crunch, leading to a singularity and then a Big-Bang again.

Thus Big Bang is not the beginning of time. Rather, it is a bridge to a pre-existing contracting era.

There are two accelerated expansions of the Universe. First during its birth, there is cosmic inflation leading to birth of spacetime.  Then the expansion slows down only to be accelerated after 3 billion years roughly, when matter started becoming dominant in the Universe.

From our Puranas and Bhagavatham, we can say that at the birth of Universe, Hiranyagarbha or spacetime expansion is driven by Maha-Vishnu or the Unified Higgs field before Higgs symmetry breaking. This thesis that Cosmic Inflation of early Universe is related to Unified Higgs field  is totally my proposition and is psuedo-science as of now.

But the same Puranas and Bhagavatham say that death of Universe is caused by nRRti Rudra an aspect of Shiva.

nRRti Rudra is this quintessence scalar field, the Quintessence that emerges moments after Big Bang. It mediates the vacuum energy and provides energy to all other fields of matter and radiation.

Yama is ‘Charge’ and Yami is the ‘Charge conjugate’ (positive and negative).  When energy from this scalar field interact with Electromagnetic field, the photons mediate the charge and its conjugate. They are the cause of ‘death’ or ‘mrtyu’.

This scalar field of nRRti leads the Universe to its destruction by expanding the Universe, when Universe becomes matter dominated from  being radiation dominated.

The Rg veda Mandala 10.165 explains this. We will see it in the next blog.