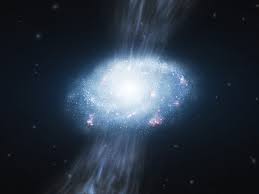 ‘Atman’ in vedas is the 'extremely virtual' in Quantum mechanics. ‘Manas’ are the ‘virtual particles’ in Quantum mechanics. Soma is the strong force. Asvin are the twin-headed electromagnetic field. Apa is flood of virtual photons that flow across in an electromagnetic field. Asva are the high energy electromagnetic radiations. Vajin are the high speed, high energetic electromagnetic gamma rays.  Go/Ga or Cows/Cattle are those similar to Asva but travel at lower speeds. Go/Ga or Cows/cattle are the massless goldstone bosons, the ‘excitations’ of fields in broken symmetry. Since they travel slower they were called colder or ‘himAya’.

In Rg Veda Mandala 9 Hymn 74 which I described in the last blog, I talked about massless Goldstone bosons as ‘Go’ or ‘Cattle’ without elaborating on how they are connected to Soma or strong force and how do I end up in that mapping.

The sloka is set post the Electro-weak symmetry breaking epoch.

Soma, the strong force is born as infant in repeated abundance in high energy electromagnetic rays (Gamma) of the dawn. The stalk holding this Soma is amzu (gluons).  This great discharge condenses into a Yaksa (Color Flux Tube) giving rise to wiser beings (newer particles).  The soma is milked from the navel of the extremely virtual (Atman), is born as immortal nectar (amrta). It tends to stream away beneficial real particles From its Innumerous streaming,  the third division/generation of particles manifests passionate off-springs.The dawn placed downwards from four navels (four fundamental forces); the oblations carry the soma as  immortal oil/ghee.

The Universe was a high energy electromagnetic radiation filled ‘casket’ or ‘Cloud’ in which a quark soup was manifesting due to soma or strong foce. The third generation of quarks, antiquarks and the gluons were in a ‘de-confined’ state. The verses till 06 talk about this state.

It is at this time the chiral symmetry breaks forming hadrons with goldstone bosons as the pions. Verses from 06 to 09 talk about it.

Universe as a sacrifice or Yajna of ‘Horse’ or ‘Asva’

This High energy EM radiation present in this stage of Universe is called ‘Asva’.

It is the ‘sacrifice’ or ‘Yajna’ of this ‘Asva’ or ‘High energy EM radiation’ that results in the entire Universal evolution from basic particles of Quarks and leptons to more complex forms like  baryons, mesons, atoms, elements,  compounds and living beings.

Will provide a detailed explanation of the above later..

Farming in the field of early Universe

This High-Energy field Universe filled with radiation and quark-gluon-plasma(Asva), can also be modelled as a ‘field’ in which a ‘forest’ or ‘vana’ of complex baryons, mesons, atomic nuclei, atoms, elements, compounds, molecules and living beings grow.

This High energy field of early Universe ( Asva) is similar to an agricultural field with soil. The soil at first is in balance. To sow seeds, the top of the soil needs to be broken or turned over. It needs to be ploughed.

Similarly the High energy field Universe post the inflationary epoch is in a balanced state called ‘Symmetry’.  The symmetries need to be broken up spontaneously or explicitly. This breaking of symmetry is similar to breaking the top soil or turning over the soil.  As the soil breaking leads to better conditions for seeds to grow, the symmetry breaking leads to growth of newer particles and elements in the Universe.

When a ‘symmetry’ is broken, it is similar to the ‘top soil’ in the ‘field’ of High energy (Asva) being broken down or turned over through ploughing a land. This act of ‘ploughing’ on the ‘High energy’ radiation filled field of Universe is in a way, the symmetry breaking as defined in Quantum physics.

Quantum physics states that whenever a generic continuous symmetry is spontaneously broken, then  necessarily new massless (or light, if the symmetry is not exact) scalar particles appear in the spectrum of possible excitations. There is one scalar particle—called a Nambu–Goldstone boson—for each generator of the symmetry that is broken.


The Soma/strong force creates the white colored matter/neutral color charged matter (quark-anti quark pions, three quarked baryons), when they wish to obtian/gain the Knowledge (of) ‘mana’ of beings. The pre-dawn lights of the proclamation of the dawn accompany the visible headless body (of white colored baryons and mesons) whose visibility is increasing (or which is burst)

Kavandham means a ‘Cloud’ or a pot-bellied casket. The Universe was a kavandam filled with Apa (Celestial waters or virtual photons) and some ‘nara’ (real particles). In other words it was an Asva, a High energy electromagnetic radiation with a quark soup. This cloud of photons or Kavandham was burst.

It was burst when soma the strong force forms 'white-colored' or neutral-color-charged matter (baryons and mesons).


Downwards/Below that white Kalasam (the body of 'WHITE' mesons and baryons) characterized by various  types of Ga/Cows (goldstone bosons), the ploughers of those gamma rays (of photons), eclipsing conquerors. The matter controlling manas (virtual pions) incites/rises from the broken internal symmetry generators of 100's of cold dark goldstone bosons.

The pions are actually the pseudo-Goldstone bosons that result from the spontaneous breakdown of the chiral symmetry (excitations of the filed in the broken symmetry direction) effected by quark condensation due to the strong force (Soma). These symmetries are further explicitly broken by the masses of the quarks, so that the pions are not massless, but their mass is significantly smaller than typical hadron masses

The white photonic casket  is smeared with the ‘Go’ or goldstone bosons which 'plough' the high energy gamma rays in the casket. That matter controlling manas (pions) incites or rises from this broken symmetry generators of 100's of cold goldstone bosons.

Those/that essence of fluid/watery strong force mingling (with manas or virtual particles), flows through the filtering cover as pAvaMana (purified or filtered one). The intelligent beings (atomic nucleus) that forms clean off  (the excess soma) as they soak in soma as they become considerate for Indra/baryons to drink pavamana.

Kabhandam is a pot-belly barrel or cloud or a headless trunk. Universe was a kabandham of high energy electromagnetic radiation. It was 'asva'. But when 'Go' or Cows or goldstone bosons that characterize symmetry breaking appear in it, it becomes 'Kalasam'.

Pions are mesons and are the 'Varuna'. Kalasam is also a pot, but one with Varuna or Mesons in it. Invoking Varuna (pions) on the pot of Photons (Kabandham) and white-colored matter (neutral-color-charged matter) makes it a 'Kalazam'.

In fact all pots of water where Varuna is invoked are kalasam.

Translations from verses 07 to 09

When (yat) ready to be gained (siSasati), the white form (zvetam rupam) matter are formed (kRunute). Soma (soma) is watered down (midhvAm) to the asura (asura) that know (veda) the mana of beings (bhu manaH). The headless body (kabandham) assists (sacate) the the proclamation (pravad) of pre-dawn lights of dawn (dhiyA)  bursting it/ increasing its visibility(darSad udriNam)

The water (adbhih) of Soma (the pions) blends with (papRcAnasya)  these (te) (as) essence (raso), (as) the  filtering/straining (avya) cover (vAram) of the soma, making the pavamAna flow (dhAvati).  The Soma wipers (mRjyamAna) are more ‘intelligent’ beings (kavibhir), masses (tama) that are inert (madin), when pleasant (svadasva) Indra drinks (pitaye) that pavamAna.