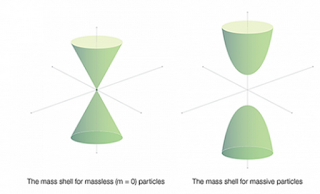 
Virtual particles are not observable. They are 'implied'. In a sense they do not exist independently. They are mathematical intermediate steps. We can consider them as our understanding ‘gap’ or a mathematical trick. Nevertheless they are extremely important in our understanding.
Atman
According to Quantum theories, Virtual particles are ‘off from the mass-shell’ at various levels. At times they can be close to on-shell or Linga, or nearly obey/disobey the Energy-Momentum relationship.  At times they can be far ‘off-the-shell’ or does not obey the Energy-Momentum relationship.
When a virtual particle is far off from on-shell or Linga or Energy-Momentum relationship, it is 'At-manas' (far off from manas). Atmanas thus indicates something virtual. Virtual particles don't obey the laws of Universe, do not follow EM relationship, can travel back in time etc.
This virtual Atman becomes the 'Witness or Observer' (as it cannot interact with real particles of Universe) and leads to the idea of conscience or witness or sAksi in consciousness domain.

Manas - The perceived and real

The root of ‘Manas’ is ‘Man’, which means ‘imagine’, ‘think’ etc.. Manas means something ‘perceived'.
Manas  is the property of mass, with which particles can become 'real' and follow the Energy-Momentum relationship.
‘Manas’ indicates the property of mass present in particles that makes them real and on-the-shell and observable. Those with 'manas' follow the EM relationship as well as all the laws of the Universe as we observe it.

‘Brah-man’ means the expanding/growing/evolving implicit/implied/virtually one. This virtual/implied expansion or growth or movement is called ‘Evolution’ in scientific terms. The Universe's expansion and growth from quantum fields to particles to more complex matter and beings is called Evolution.

Evolution is virtual or implied as it cannot be isolated out of its domain of existence. It is perceived. It is understood. But it cannot be identified as a separate item much like Manas, Atman and virtual. This expanding, ever evolving growth is Brah-man.

1. Manas are particles with mass, due to which they become real. They are ‘on-the-mass-shell’ or on the Linga.
2. Atman is far off from the EM relationship. Atman are the virtual particles.

3. Manas becomes pracetas, if particles live for sufficient time to be observable and interacting.


In quantum mechanics, an excited state of a system (such as an atom, molecule or nucleus) is any quantum state of the system that has a higher energy than the ground state (that is, more energy than the absolute minimum). Excitation is an elevation in energy level above an arbitrary baseline energy state. This excitation is Manmada.

The lifetime of a system in an excited state is usually short: spontaneous or induced emission of a quantum of energy (such as a photon or a phonon) usually occurs shortly after the system is promoted to the excited state, returning the system to a state with lower energy (a less excited state or the ground state). This return to a lower energy level is often loosely described as decay and is the inverse of excitation.

There are several states associated with excitation or Manmada. They are

Then there is Atma-kAma. Atma kAma are excited states of the extremely implied/implicit/virtual particles. Such extremely virtual particles, which are far off-the-mass-shell, even when excited, never become real or observable particles, as they have to persist for a long duration to be real. They always remain virtual excitations that die out.

When Shiva (Energy) gets excited (moves to excitation level) in a Quantum System, the excitation does not last long. The excitation or kAmA  burns up, decays, energy is given out and the system returns to a more stable energy state (ash). This is how the Puranic story of Shiva burning kAma was probably born.


When Shiva (Energy) is aspected by kAma (excitation/elevation) in a particle, the particle acquires momentum (Shakti) along with energy (Shiva). That is Shiva and Shakti are united due to kAma.


When real particles gets into an excited state (kAma enters the manas) and it remains there sufficiently long time it becomes real observable particles. That’s how the Universal evolution started at the origins of Universe.


Nasadiya Suktam depicts the origins of the Universe. It says “At the start of time, before that, KAma got seeded in the Manas at first”.


This can also be seen from a sloka in Brhadharanyaka Upanishad

Manas and Linga in Brhadaranyaka Upanishad

My translation of it is

The excited (kAmAya) particles with mass (mano) when they get linked/attached to the mass-shell (linga), they become real, observable and they take part in ‘inter-actions’ (karmaNa).

But then  those in degenerate ground states, devoid of excitations in vacuum state, meta-stable states, those excited states of the extremely virtual,  they do not  ascend the prAna or life. They remain merged together with quantum fields of spacetime.

But this is traditionally translated this way.


“It is said that
Where one’s mind is attached - the subtle self (lingam manas)
Goes together with action, being attached to it alone
Obtaining the end of his action
Whatever he does in this world
He comes again from that world To this world of action
The man who desires (transmigrate). But the man who does not desire (never transmigrates). Of him who is without desires, who is free from desires, the objects of whose desire have been attained, and to whom all objects of desire are but the Self—the organs do not depart.
Being but Brahman, he is merged in Brahman”

The sloka says ‘It is said that’ (tad eSa sloka bhavati).  It means the sloka starting with ‘tad eva saktha..” is dated prior to the Upanishad itself. It is from some other text or a sruti, which the Upanishad is trying to explain.

In a philosophical domain, manas becomes mind, kAma the excitation becomes desire, spacetime becomes brahman.  Then it  just means to say that if we give up the desires we are merged in brAhman and if we have desires we keep ending up in this world.

As one can see in the traditional interpretations, it talks about human beings, while sloka is very generic. The word Linga is not well explained. But that’s what philosophy around science can do. It can extract concepts from science and apply it to human life.  It is good as long as it does not obfuscate science and become de-facto science.
-TBT