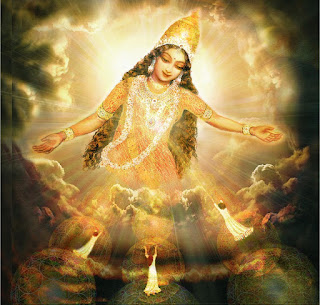 Background
Before I continue with Vishnu Sasharanama to complete our understanding of Vrsakapi, let me take a moment to describe my understanding till now in a jist. It is important to understand the next stanzas of VSN.

‘Atma’ is the unchanging, eternal one out of which evolution comes out according to Vedic scriptures. This Atma is called Paramatma or Nirguna Brahman in vedanta. It is eternal, unchanging and beyond all our understanding. Even Nasadiya suktam says we may never know or just partially know it at all times.

That evolves out of Atman is called Brahman in Vedas. The Brahman is generally referred to as saguna brahman in Vedanta. Shiva, Vishnu, Brahma, Shakti, Skanda are the evolutionary attributes of Saguna Brahman.

The Universe is a mAyA

Vedas are science. But vedanta is philosophy. Around science, at all times, philosophies emerge. Vedanta interpreted this mAyA (rest-mass)  of vedas as ‘illusion’ in a philosophical way.

The momentum (shakti) appearing as rest-mass (mAyA) is indeed illusion. But the Vedantic definition of mAyA as illusion has stuck with popular imagination, while the vedic understanding of mAyA as rest-mass lost popular appeal.

The following are in perfect alignment with what science say and Vedas say. Check out.

kAlA creates the ‘mAyA’ or rest-mass. In Vedas and Puranas, mAyA is the ‘pAsA’ which ‘entangles’ and creates the mass.  Basically mAyA mixes (the states of particles) in such a way that they cannot be described independently. kAlA’s pAsA produces this entanglement or mAyA.

Hence I mapped kAlA, the Higgs field’s working to Quantum Entanglement. This is not yet proven.

There is an emerging research field that says the Arrow of time is the increasing order of Quantum Entanglement or increasing effect of kAlA. Vedas have already described kAlA as Time. It is yet not proven fully.

Unproven 3:
When ‘Brahma’ or Gravity, which is the bending of Hiranyagarbha happens, I have written this bending travels like a Swan in a pond producing silent waves around in the spacetime.

Such Gravitational waves have not been detected till now.
-TBT