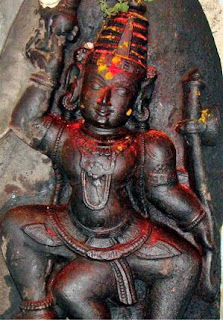 Before I discuss the Rg Veda Mandala 1 Hymn 24, Let us understand Vaisravana. If Apa are photons, then Vaisravana are Color Charge or more specific the Gluon Flux Tubes or Color Flux Tubes. Vaisravana is called Sriyam or having the property of Sri and hence the brother of Sri.
Color charge is the property of matter that creates a multitude of fermions and hence the wealth of all the Universe.  That Vaisravana is Color Charge is understood from a reading of the Aruna Prashnam, which conveys that Apa are photons.

Tvashtrim mAyAm vaisravana
The  illusory energy/material energy/rest-mass (mAyAm) of Tvastr  is by the  Vaisravana.
Vaisravana is the one that causes the material energy/rest-mass of Tvastr.
I had translated Tvastr as B-mesons and mAyA as rest-mass. B-mesons consist of a Bottom anti-quark and a up/down quark.   So Vaisravana is the one that causes the B-meson’s material energy or rest-mass.
Science says Color charge (Color Flux Tube or Gluons) enables the formation of Tvastr or B-mesons out of the Quarks. The rest-mass of the Quark combinations arises out of the Color Charge. Thus Vaisravana is the Color Charge.
The force-field of Color charge enables the formation of mesons, baryons and other exotic forms of quark combinations.
Vaisravana ratham sahasra vandhuram puru cakram sahasra aSvam AsthAya
Vaisravana having mounted/ascended (AsthAya) the Chariot (ratham) with innumerous (sahasra) carriage-seats  (vandhuram) Multiple (puru) wheels (cakram) innumerous (sahasra) horses (aSvam)
Vaisravana having mounted a chariot with innumerous carriage-seats, multiple wheels and driven by innumerous horses.
Vaisravana, the color-charge field is not perceptible. But when it mounts on Tvastr, the B-mesons (or other quark combinations), it is seen.
In the early Universe, on the ocean of photons or light,  the first to form are innumerous quarks, antiquarks, gluons and then the B-mesons. The Vaisravana or color charge or gluons makes the rivals quarks and antiquarks to combine and form those innumerous B-mesons.
Vaisravana the gluon/color flux tubes, thus become one that is riding a chariot with thousands of seats, multiple wheels and driven by thousands of horses.

AyAhi nah balim yasmai bhUtAni
or
Aya ahina balim yasmai bhUtAni
Vaisravana, having mounted the chariot of Tvasta,  come  our bali/offering unto the matter
Vaisravana, the color-charge field having mounted the Tvastr or B-mesons,  comes in as the ‘bali’ or offering in the Evolutionary sacrifice.
From the B-mesons all mesons and baryons form as the evolution (evolutonary yajna) proceeds.
balim Avahanti dhanam gAvo hasti hiraNyam aSvAn
The bali/offering they offer/invoke (avahanti)  wealth of  cows, elephants, golden horses
Vaisravana mounting the chariot of Tvasta makes it the oblation to produce a wealth of matter.  I translate gAvo as leptons, Elephants as massive W,Z Bosons and Horses as inert neutrinos. I had always translated ‘hiranya’ as ‘inert’.
The Color Charge or gluon flux tubes mounting on Tvasta, the B-mesons makes it the ‘bali’ or offering that produces innumerous wealth of matter in the early Universe.

Vaisravana - The Brother of Sri

Hence it is Vaisravana that makes the Bali or offering to evolution.
Without Color charge or Gluon tubes, quarks do not become mesons or baryons. Without Color charge evolution will not proceed. Hence Color charge makes the ‘food’ or ‘bali’ out quarks.
The Color charge is digested in the matter and becomes the property of Consciousness. All the consciousness that rides on all matter in this Universe is referred to as ‘Sri’. Hence Vaisravana is said to be brother of consciousness or brother of Sri.
Once upon a time when universe was a Quark Gluon Plasma, there arose mountains of Baryons, mesons and other exotic Quark combinations.  Vaisravana resided in these mountains within the limits of equal distance on either side.
Science says the color charge force field travels (gam) within the limit (anta) of the nucleus (inert center of every atom), in the nucleons of different atoms (different mountains). So what are sudarsana, kraunca, mainaka etc..? They are names of mountains that are extremely visible (su darzana),  mountains that cannot move (Kraunca) and mountains that still move (mainaka). These are mountains of Quark combinations that arose in the early Universe, that become the nucleus of different elements.

When Mountains flew with wings

There are stories in puranas that say mountains ‘flew’ or moved from one place to another in the early Universe.
Yes they did.
The baryonic, mesonic and other exotic quark combination of  formed in the early Universe, out of the Quark gluonic plasma.  They  moved continuously in the sense that many exotic matter forms (mountains in QGP) kept forming only to get annihilated and re-appear at other places.  Quarks combined due to color charge and formed exotic flavor of quarks, got annihilated, reappeared and this was going on.
But when Indra (Three quarked baryons) asserted his supremacy, that is when baryons became predominant matter form,  the wings of the mountains or the movement of the nucleonic mountains got stopped, as stable nucleus formed out of three-quarked baryons.
Vaisravana resides within the limits of these mountains. Color charge resides inside its quark combinations and never comes out.
The gluon tubes never exceeds the quark combinations that it forms.

Vaisravana - One that burns the ‘Bali’

Vaisravana - One that forms the ‘Kurma’

The lord of all on all matter (sarveshAm lokAnAm Adhipataye) and beings is seated (sIdeti). Then  that (atha tAm) Agni is kindled (agnim indhita) in which (yasmin) thus  this action takes place (karma prayunjita), that tirodhA becomes the bhu, bhuva and Sva.
Thus in the ocean of ummanifested breast, with the entry of Vaisravana, agni or transfer of energy gets placed.  When the Vaisravana gets seated fully, the agni gets kindled. When these happen the unmanifested breast becomes the whole Universe.
This Vaisravana is called the ‘agra piNDa juhomi’ meaning the make of the first ball of flame. It is the invoker of transfer of energy or Agni. Before Vaisravana, agni or transfer of energy was not invoked and hence the Universe remained ‘Tirodha’ or unmanifested breast.
Science says in the Ocean of photons in which the quark gluon plasma floated, becomes the Universe, due to Color charge, as Color charge binds the Quarks into different fermions.
The ocean of unmanifested breast is the ocean of photons. The Vaisravana that enters and gets seated in the quarks are the color charge/gluon flux tubes which binds them.  These form the fermions or the ‘Kurma’ of the Early Universe. From there starts the transfer of energy among matter or agni and the Universe becomes manifested.

Vaisravana the color charge becomes the property of consciousness, makes the quarks/antiquarks as ‘food’ or ‘bali’ and facilitates the Yajna or sacrifice of evolution. But it is limited to the nucleonic mountains, originates from the center and is spread equally in both directions. It whips up and deforms matter and produces different kinds of matter or wealth of matter.
Since Vaisravana the color charge becomes a property of the consciousness in us, hidden as the consciousness, it is said to be the brother of Sri, the consciousness in all of us.
Since it produces all the wealth of matter in the Universe, by being digested, it is called the Lord of Wealth or wealth giver. Dhana-da means wealth giver.
Since gluon flux tubes get deformed (break) and produces more matter,  it is called Ku-Vera, which means deformed.
Since it compresses the matter it is called an offspring of Vishravas or Vaishravana. Shravas means hearing or mechanical compression. Hearing happens by mechanical compression. All forces that compress are said to be off-springs of Vishravas and hence Vaishravana.

According to Quantum Chromo Dynamics, the Color charge is of three types. They are denoted as Red, Blue, Green (not to be confused with real colors. These are just notations).  Hence Ku-vera the deformer is depicted with 3 eyes or 3 legs.
Eight combinations of these three types of color charges (in gluons) is what produces all the matter in the Universe according to QCD. The ninth combination is impossible to form.
According to QCD, these eight color combinations are the ‘teeth’ by which vaishravana (color charge) grabs the Quarks and digests them into a two-quark or three-quark or more exotic quark combinations. Hence Kuvera is depicted with eight teeth.

Vaisravana is depicted holding a mongoose sometimes. Mongoose devours snakes. Vaisravana devours the 'Ahi' (snakes) which are the Quarks and forms the fermionic mountains.

Vaisravana or Kuvera is depicted as a drunkard because gluon flux tubes continuously drink Strong interaction or Soma or Energy.