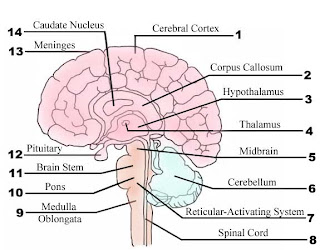 Hanging down pendulous structure that connects everything or Big threaded

Scion of the Great Reason/source OR scion of Lord Maheswara

Vigna Vinayaga - The Lord of all actions

The Lord of all actions

Pada Namaste - I submit to you

I submit to you

The Shape and Structure of Brain

Brain is carried in a small crucible made of Skull bones on all sides. Thus the brain is the Mushika Vahana.

The Cerebellum of Brain is shaped like Modaka. It is placed like a Modaka as a separate structure to the brain. It is also exactly formed like Modaka. Cerebellum has a thick layer of tissues hiding a set of neurons that gives massive signal processing capability, which themselves are around a core cerebellar nuclei.

The cerebrum of Brain is shaped like a Big fan that emerges from behind. Thus the brain is Chamara KarNa.

The Spinal cord is connected to Brain as a hanging down pendulous thread-like structure that connects to all the nerves of the body and thus controls all the body. Thus Brain becomes Vilambita Sutra.

The Brain is itself short and stout. Thus it is Vamana Rupa.

As the Rg Veda Ganapati Mantra says, brain is the evolver and the evolved. It carries all the logic and reasoning. It is the REASON for all our actions.

Thus the Atman or Supreme consciousness is the Maha-Eswara or the Great Reason. Our Brain is the descendant/scion of that Atma as it carries on the Legacy of thought and reasoning. Thus Brain is the Maheswara Putra.

Brain is the Lord of of all our actions. Hence it is Vigna Vinayaga.

Thus this sloka aplty describes our brain, the Vinayaga (Lord of all actions) or Ganapati (Guide of all attendants).

The Puranic descriptions of Ganapati

In the Puranic times, as several of our devas were given human forms or forms/shapes that human beings could understand, the current structure of Ganapati would have evolved.

From this sloka, if one just looks at the depiction, it is easy to portray a Vinayaga with a person who travels on mouse (who travels on crucible does not make sense), a person who carries sweetball in hand, a person with fan-like ears (which else has got a fan-like ears except elephant, hence elephant-headed), a person with a thread wrapped all around the body (a long pendulous structure that connects everything is not possible unless a thread is wrapped around the body), a short and stout person (hence pot-bellied) and a son of Siva.

Thus a Vinayaga who is elephant-headed, who has fan-like ears, who is pot bellied, who wears thread around the body/belly, who travels in a mouse, who carries sweetball in hand is born.

The actual depiction, in my view, is about our brain.

This does not mean we should not worship the Lord Ganapati as we see it now.  Please invoke the Ganapati, but remember to aspire for that intelligence that evolves your brain and also gets evolved.